Home » Ecuador Volcanoes » Ecuador 2019: I’m Off to Climb the Volcanoes 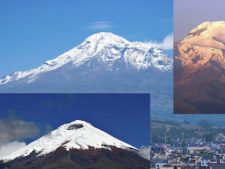 I’m very excited to announce my plans to climb in Ecuador in January 2019 with my good friend Robert LeClair. We leave the US in mid January.

Before I get to the climbs, I need to share this story. I was doing a talk on my mountain climbs to a group of 8 to 14 year-old school kids. At one point, a “confident” 6th grader raised his hand with sound purpose. I continued with my talk but he was persistent. I know this type …. Finally, I made eye contact.

“Yes, Do you have a question?” He stood up, adopting a stance. I took a step back but smiled. “My dad says Everest is not the tallest mountain.” He declared as the other kids looked at him, then me. I felt the pressure knowing where this was going. He continued. “He says it’s Chimborazo. Have you climbed it?” All of a sudden my summit of Everest, K2 and others melted under the scrutiny of this 12 year-old.

I took a deep breath and gather my composure to enter the debate with this expert, anointed by his father to be the keeper of mountain statistics. “Well, your father has a point …” As I will explain later in this post. Needless to say, I consider my debate with the aspiring member of Congress to be a learning experience  😆

I’ve climbed in South America four times: three on Argentina’s Aconcagua and once on Peru’s Alpamayo. I summited each time so I hope to keep this success rate up as we will climb Cayambe at 18,997 feet/5790 meters, Cotopaxi at 19,348 feet/5897 meters, and Chimborazo at 20,703 feet/6310 meters. Logistics will be provided by Mountain Madness

These peaks have become extremely popular climbs for aspiring high-altitude climbers. With relatively easy access, low cost and reasonably high success rate, many people new to climbing seek these out for their first big peak. I have a few different reasons.

I used the text from the Mountain Madness site as an overview of each peak. I’ll revise with my own thoughts after the climb and also at the FAQ page.

Good climbing and interesting glaciers characterize our chosen route on this beautiful 18,997 foot mountain, the third highest in the country. With easy access from a comfortable hut, the glaciers of Cayambe offer an outstanding venue for our Mountaineering School. Huge crevasses, complex icefalls, and seracs provide participants the ideal setting for learning ice climbing, crevasse rescue, and a variety of other fundamental skills. The ascent of Cayambe follows diverse glacier terrain to near the summit crater where often challenging route-finding around a gaping bergschrund provides an exciting climax to the climb. 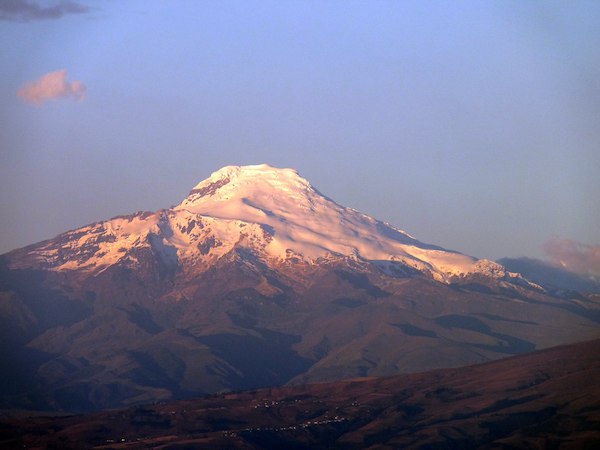 This 19,348 foot peak are located in beautiful Cotopaxi National Park, an area complete with alpine lakes, pine forests, and the stark, desolate landscape of the paramo. Standing in high isolation above the paramo, the striking cone-like perfection of this symmetrical mountain strikes the climbers imagination. From the 15,750-foot hut we ascend moderate glacier slopes to the summit. Along the way however, complex crevasse patterns and snowbridge crossings over deep crevasses make the climb interesting. After passing through a heavily crevassed area midway through the climb, we reach the final summit slope. Here a challenging section of 35-40 degree snow leads to the abrupt finish of the climb on the crater rim of the world’s highest active volcano. 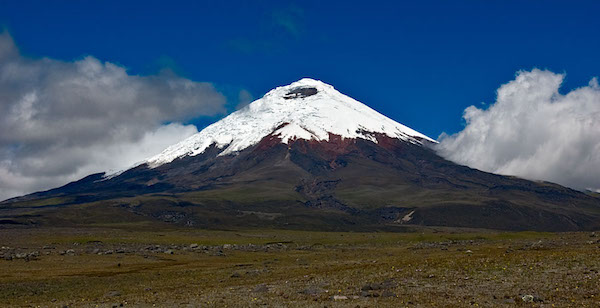 At 20,703 feet this are Ecuador’s highest peak. Depending on conditions Mountain Madness groups will ascend one of two routes on the magnificent western flank of the peak. The direct route, the most commonly used, and the Whymper route are relatively straightforward glacier climbs. While never difficult, the 30-35 degree slopes hold the climber’s attention throughout the more than 4,000 feet of elevation gain to the summit. From the 16,400ft Whymper Hut, our ascent follows a low angled glacier ramp that leads to the long summit ridge. Here we encounter a few short 40 degree snow/ice slopes (no more than 100-300 feet in length) and groups typically find themselves negotiating a few crevassed sections on the upper slopes of the mountain. This are a long, difficult day of 12-14 hours roundtrip.

Many people belive that Chimborazo is the highest peak on earth because it’s the farthest point on the surface from Earth’s center – the summit is the fixed point on Earth that has the most distance from the center – because of the oblate spheroid shape of the planet Earth, which is “thicker” around the Equator than measured around the poles. 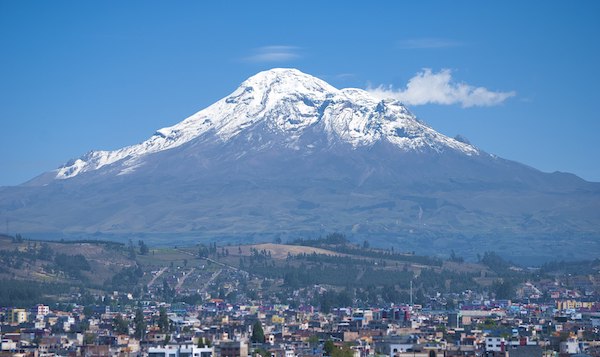 The Battle for Highest

However other folks feel that Hawaii’s Mauna Kea is the highest because it starts at the ocean floor. Again from the fine folks at Wiki: “Its peak is 4,207 m (13,802 ft) above sea level, making it the highest point in the state of Hawaii. Most of the mountain is under water, and when measured from its oceanic base, Mauna Kea becomes the tallest mountain in the world measuring over 10,000 m (33,000 ft).”

But all of these arguments are moot according to this excellent article on 8kpeak.com. The author, Jim Gile, walks us through the physics and math on what it “feels” like at extreme altitude and the impact of latitude and temperature. Not surprisingly, Everest still comes out as the world’s highest peak with the “feel-like” altitude dipping as low as 26,000-feet while Chimborazo is a relatively stable 19,500′ – lower than it’s actual altitude. 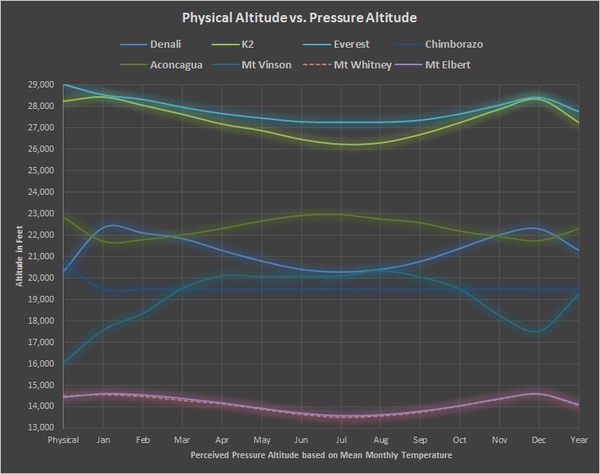 Gile’s goes on to offer these insights: “The first thing to note is that the pressure altitude on the summit of Everest is never as high as its physical altitude which is good for those of us who climb without supplemental oxygen. In conjunction, the pressure altitude on the summit of K2 is almost the same as that on Everest in January and December but then it just barely drops out of the 8,000 meter (26,246 feet) peak list in July. Next is the observation that Mt Vinson, where the average yearly temperature at Vostok Station is -65 F, has a pressure altitude at or above 20,000 feet (more than 4,000 feet higher than its physical altitude) for half of the year. Also note that both of the high latitude peaks (Denali and Mt Vinson) have pressure altitudes near or above their physical altitudes the entire year while Chimborazo, at the equator, is consistently at 19,500 which is 1,200 feet below its physical altitude. Finally, notice the indication that Mt Whitney (14,505 ft) in California and Mt Elbert (14,440 ft) in Colorado have virtually the same pressure altitude profile and that both drop below the coveted 14,000 foot mark during the normal climbing season of May through September.”

A full Trip Report will be available after the climbs plus updates during the climb on my Blog.

As usual, my climbs are to raise awareness and research funds for Alzheimer’s Disease. Please learn more at this link.