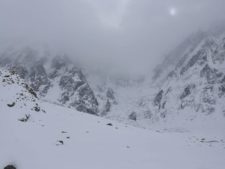 Update on missing Nanga Parbat climbers Tom Ballard and Daniel Nardi. In spite of two helicopter passes plus a foot search to Camp 1, there is no sign of the climbers. They have now been missing almost 6 days, and last heard from on Sunday, February 24th. The weather has hampered further air searches.

A helicopter search on Friday, March 1, was cancelled due to poor weather. Plus, as is normal in Pakistan, payment (perhaps 30% of the total estimated bill) must be made before a helicopter search begins and that created some delays. The Italian Ambassador Stefano Pontecorvo had to intervene to prevent any further delays however this should be yet another warning to anyone climbing in Pakistan to have resources ready at moments notice to fund a rescue.

On March 2, 2019, local time, the weather still has not cleared according to the official site with information Daniele Nardi

The weather forecast on the nanga parbat and k2 area provides for snowy rainfall and low-altitude clouds with winds throughout today. We are in contact with the mountaineers at the base camp and with the Pakistani government to decide how to proceed, on today and tomorrow with the research of Daniele and Tom.

In these hours of particular apprehension we want to thank the institutions of the Italian government, in particular to ambassador Pontecorvo, and to those Pakistani and the centre of askari who are working together to ensure the best functioning of Daniele and Tom’s research operations. A special thanks goes to Ali Sadpara and the team at the base camp and research done yesterday in the day.

The use of drones is not a guarantee. Last year on Broad Peak, British climber Rick Allen was lost. A cook in base camp sighted him through a telescope and opportunistically a team on nearby K2 had a drone and sent it over to the area where Allen was sighted … and they found him. Otherwise searching the huge flanks of a mountain like Nanga Parbat with a drone with limited battery and range capacity is like searching for a needle in a haystack.

The very fact they want to avoid sending a search party to the area due to avalanche danger speaks for the dangers Ballard and Nardi experienced.

Nardi also told us that he did a variation in climbing : “For the first part we were on the path that I did with Elizabeth Revol few years ago, then the insight! With Tom we saw a couloir, casting an ice and snow, in the midst of the rocky walls that would allow us to go up, up, much faster. ”

Then I went back down to camp 4 at 6,000 meters, to eat and rest. Since that time, communications were interrupted. It was the second time that Daniel came so high on the spur, but this time by a new route, other than that he had always used in previous attempts to Mummery with Revol. (source)

On another development, Elisabeth Revol is reported to be assisting the search in some capacity. Last year she was rescued in a similar area after her teammate Tomek Mackiewicz died.

Now that some climber’s definition of winter (December to February) has passed, even if there is a summit, many climbers will not accept it as a winter summit. Others feel winter ends on March 20, the Spring Equinox.

Similar to last year, the K2 teams have responded to humanitarian needs for rescues on nearby Nanga Parbat but thus far have not left their base camps due to weather. If they both stay for a summit attempt, I hope they join forces and stop competing. A K2 summit in March would be amazing.

The K2 team lead by Alex Txikon are at base camp waiting for better weather and one last summit attempt on K2. You can follow their movements on Alex’s GPS tracker, Twitter, Instagram, and Facebook.

The Kazakhstan, Russia and Kyrgyzstan team are also waiting for better weather and one last summit attempt on K2. You can follow them on Instagram but Facebook and their site are the best sources.