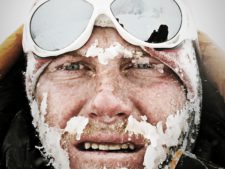 This spring Everest season, something rare will take place – an attempt on a new route.

According to Everest historian, Jochen Hemmleb, the last time a new route was successfully completed was the Korean line on the left side of the Southwest Face (Southwest Face to West Ridge) in 2009, 10 years ago. And for the statistics, the following year Gerlinde Kaltenbrunner was the first to climb the North Col from the West and continue all the way to the summit.

Two well known and seasoned climbers, Cory Richards and Esteban “Topo” Mena, will join forces to attempt a natural line on the North Face that has been attempted but never completed. It basically goes straight up from Advanced Base Camp. They will be using the professional logistics from Adrian Ballinger’s Alpenglow commercial outfit. Recall that Adrian and Cory have been together on Everest for both of their no O’s summits in 2016 and 2017.

Richards made history becoming the first American to climb a winter peak over 8,000 meters at the age of 29. Pakistan’s Gasherbrum II. The movie Cold revealed the difficult journey. He is a photographer and summited Everest without supplemental Os in 2016.

Topo at 28, has been setting the climbing world on fire when he became the youngest person to climb the South Face of Aconcagua. He has summited both Manaslu and Everest – without using supplementary oxygen. In 2018 Topo summited both Cho Oyu and Everest with clients in under 30 days. He has also set new routes in Kyrgyzstan and China and his climb of Kyzyl Asker was nominated for the Piolet d’Or.

I asked Cory about their plans this spring, 2019:

Q: Will you attempting the same route Raphael Slawinski, David Goettler and Daniel Bartsch wanted to attempt in 2015 but were stopped by the earthquake?

CR: Yes, with potential variations depending on conditions. The line is a stunning one, and the most natural unclimbed feature on the face. That said, if snow conditions prove too unstable for whatever reason, the buttress that bisects the two prominent couloirs is also an option. Point being, the obvious couloir is our primary objective, but we are adaptable and will be looking to maximize our potential given the conditions we encounter.

Q: How will you acclimatize – on Everest on elsewhere?

CR: We plan to acclimatize on Everest and in the area surrounding basecamp. We’d like to minimize our time up high while maximizing acclimatization gains. Topo lives considerably higher than I do and has amazing access to a 6km training playground, so I will certainly be slower out of the gate. Once we have put it plenty of time around BC tagging high points in that zone as a method of continuing our training before our final taper, we will move to ABC and begin working on the lower section of the route.

In essence, most if not all acclimatization up high will be done in the process of familiarizing ourselves with the line itself. We’d like to climb quite high in the couloir to get a better view of the meat of the technical difficulties which occur above 8km. We hope to spend several nights above 7.5k, but this is still up in the air. Again, we want to be as adaptable as possible and just go with the flow.

Q: Will you be climbing in alpine style?

CR: Is there another way? 🙂

Q: Will you use supplemental oxygen?

CR: No oxygen and no outside support above ABC.

Q: Its been 19 years since the last new route was put up on Everest. Does this stat make you nervous or challenged?

CR: More than anything, that stat speaks to opportunity. There are a plethora of reasons why nothing new has been established in that window. Some of them alarming, others just circumstantial. Regardless, I don’t think either of us are tremendously concerned by that. We are approaching this from a fairly relaxed perspective and are just looking to go have an amazing experience together on a wild face. It’s exciting to know that there is an opportunity to establish a new line in this style on Everest at all. The elapsed time between this and the last successful new route doesn’t have much bearing on us from my perspective.

Q: While you should be away from the normal crowds on the NE Ridge route, will you do anything to avoid other climbers?

CR: I love the community for the most part. But I also try to keep to myself in a lot of ways. While I am pretty public in some ways, in others I deeply value my privacy. I think Topo and I share an understanding of our respective needs for space…be it from our own team or others. We will do our best to carve out a little space that is reserved just for us that we can escape to. But part of the fun of expeditions can be the social aspect. Its not as much the crowds before the climb that I want to get away from. But we are looking forward to having a big piece of the mountain to ourselves.

Q: You both have summited Everest with supplemental oxygen. What lessons from those experiences will you apply to this attempt?

CR: This trip has been a long time in the making for both of us. While we are implicitly aware that altitude can affect us differently than it ever has in the past, the knowledge that we have both managed to climb it without oxygen is very additive to our collective sentiment towards the attempt. It’s calming in a way. The other thing that we have is time under the face…six seasons collectively. We have had time to watch the couloir, watch the weather and wind patterns, watch the snow pack change, move, and settle. That time and observation has given us cautious optimism and confidence regarding the objective hazards on the route and it lends itself to a unique positioning for us. I fucking HATE avalanches…and (knock on wood), I feel really good about this objective. Obviously, the mountain dictates success or failure more than anything else, but we feel really good.

Cory also announced on his Facebook page that their climb will be documented on Roam Media. This is a teaser.

Best of luck to both of these world-class alpinists.