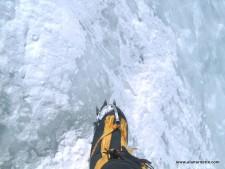 Some interesting news from both sides of Everest that may suggest this will be a challenging season high on the Hill. But it’s a bit too early to get worried. We have about three weeks before the main summit pushes begin.

Missing Annapurna climber Malaysian Wui Kin Chin is back in Kathmandu but listed in critical condition with severe respiratory issues due to being in the extreme cold for over a day and night. There is an unconfirmed report that his Sherpa, Nima Tshering Sherpa was injured during the process of trying to get him down.

There are reports that the Lhotse Face is very icy this year with little snow. Terms like “hard-packed blue ice” are being used to describe it. This could mean problems for the Nepal climbers this year. They will have to be extra careful and make sure they are always clipped into the fixed ropes as it is very easy to slip and fall in these conditions.  Expect the climb times to Camp 3 to be on the high side of the normal ranges.

Again today we had the Lhotse Face to ourselves when we were there. The ice screw anchors and ropes are in great condition, but the Face itself is concrete hard blue ice. Good crampon technique was needed to move efficiently up the slope.

There has been a revolving door at Camp 2 as multiple teams have arrived, spent their two nights and returned to base camp this week. Next for many of them is to either sleep or just tag Camp 3.

Lots of people now at Advanced Base Camp. The rope fixers ran into a lot of snow as they were trying to get the route to the North Col and had to regroup. This may indicate some challenging climbing conditions this season, but lets wait and see.

Today our team rested in the Base Camp.  Official representatives of the Tibetan mountaineering federation came to us and took money for the arrangement of fixed ropes way. So far, the route is not equipped, even to the North Col. They say that avalanche danger exist.