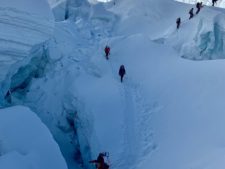 This continues to be a good year on both sides of Everest. There have been the occasional normal delays and there are reports of “deepish” snow on the north side that is giving the rope fixing team some issues, but overall its about as normal as you get on the world’s highest peak.

I reached out to Garrett Madison of Madison Mountaineering for his expert first hand observations of conditions on the Nepal side. I wanted to know about the Icefall, Western Cwm and if the Hill felt crowded given Nepal has sold more permits than ever this season. There could easily be hundreds of people on the route at any given moment. 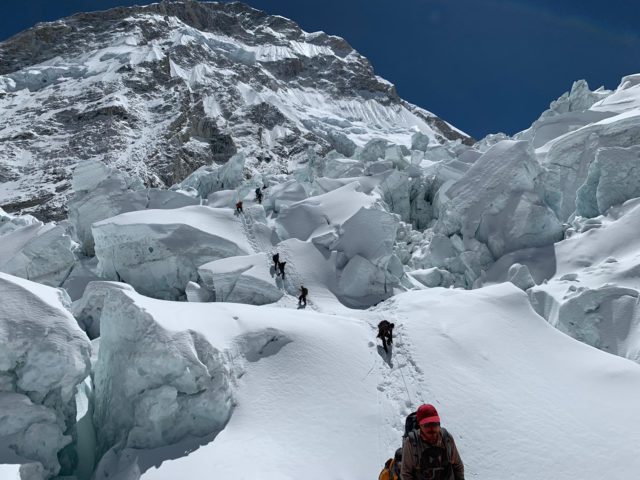 Through the miracle of the Internet, Garrett sent me an update this morning along with some great pictures. Here goes:

Alan, based on my 50+ trips through the Khumbu Icefall over 12 Everest expeditions, here are my initial thoughts as I just came down yesterday with my team completing our ‘first rotation’ up on the mountain, 2 nights at camp 1 and two nights at camp 2.

My general sense of the route through the Khumbu Icefall is that it is easier and safer than in previous years.  This is perhaps due to the changing nature of the glacier / icefall as it melts and settles.  Starting out from base camp the route meanders through the lower icefall where hazards are virtually nonexistent, then begins ascending up climber’s right (Nuptse side) of the icefall with varying degrees of slope angle.  This section is also largely without hazards as there isn’t much hanging ice above the route nor are there any obvious ‘hollow’ areas on the route.  The route does however, go close to the blast zone where seracs higher up on Nuptse occasionally break and ice avalanches come rumbling down.  This happened to us yesterday just as we were descending this section. Fortunately, the route is on the opposite side of a natural ice formation (fin) that separates the debris field from the route. 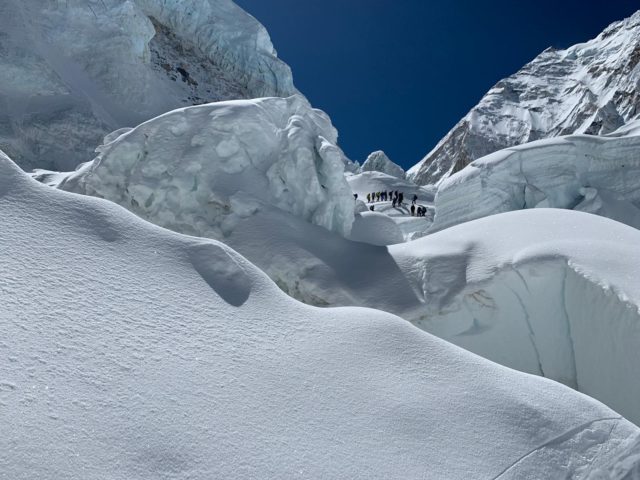 2019.04.25 In the icefall. Courtesy of Garrett Madison, Madison Mountaineering

Then the route enters the ‘popcorn’ area and makes a sharp left turn, traversing the icefall to the opposite (climbers left / Everest west shoulder) side.  Going through the popcorn there are ample hazards as the route is very ‘hollow’ underneath with many seracs or hanging ice features just above.  I don’t enjoy going through this section and prefer to move quickly to avoid unnecessary time exposed to the potential of falling ice or blocks shifting underneath. 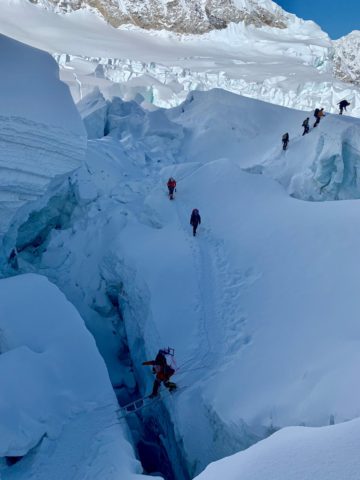 The route enters the ‘football field’ area which is approximately halfway to camp 1. The football field used to be a noticeable flat area, named because it resembled a football field. Now, however, because of changing conditions in the icefall there is barely any flat area, just a small spot to take a break that feels relatively safe from hazards. An oasis of safety in a stormy sea!

Upon leaving the football field and heading up the route follows the path as before up and to climbers left towards the ominous west shoulder of Everest.  Veteran climbers don’t enjoy this section as you are underneath the seracs (hanging ice) high above, which notoriously broke in 2014, wiping out a portion of the route.  The route has a couple of steep ladder sections in this area, at one point there are 2 ladders side by side meant to ease congestion, along with rappel lines.  This is probably the most dangerous part of the route in my mind as far above the seracs loom, and there isn’t much option to take cover if an ice avalanche comes down. I spoke to the SPCC (ice fall doctors) about this and they said they looked for an alternative for several days but non existed, so they settled on this option.  It’s relatively easy to navigate, but the hazards are dire if ice breaks off from a few thousand feet above…

After this vertical ladder section, the route meanders / zigzags along nearby the west shoulder with ice cliffs above, however a large crevasse separates the Khumbu glacier from the wall, so hopefully that would absorb any avalanche debris if ice broke off high above. The route then breaks to the right (center of the glacier) towards Camp 1 which is in the middle of the glacier as before.

Overall, I feel that there are fewer ladders than in the past, perhaps only a half dozen in the icefall, the route is generally safer as there are no areas that seem imminent of collapsing, although it’s often what we cannot see that is most dangerous.

Heading up out of camp 1 into the Western CWM the route goes up and over a few near vertical walls, these are no more than 5 meters. Then there is one bigger wall that has 4 lines on it for ascending / descending.  I suppose it’s the same wall from last year that had the 2 vertical ladders on it but has has melted or filled in with snow at the base so that it’s not nearly as high or challenging as last year. 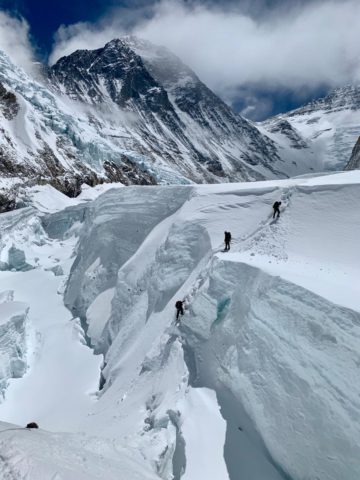 2019.04.25 Between camp 1 and camp 2. Courtesy of Garrett Madison, Madison Mountaineering

Once over this wall, and having caught one’s breath, the route goes down into a massive crevasse where a single ladder spans the bottom, and then you climb up the other side by traversing. After that the route only crosses 2 more single ladders before gaining the view of Camp 2 far in the distance, however there are crevasses to walk around / step over which are very deep (as illustrated by the climber who fell in a few days ago).  At this point, as you know, it’s a long walk on the seemingly safe glacier up to the moraine on which Camp 2 sits.  However, there is a danger here as icefall can come off the west shoulder of Everest.  We noticed a large ice debris field off the west shoulder that covered a section of the route (approx. 50 meters) with a few feet of ice debris, this just occured on our rest day at camp 2.  Ice avalanches can come down from either side of the CWM (Nuptse or Everest west shoulder) and cross the entire CWM.  This rarely happens but is a hazard to be aware of. An avalanche transceiver will do you no good if you are buried by a few feet of ice debries… 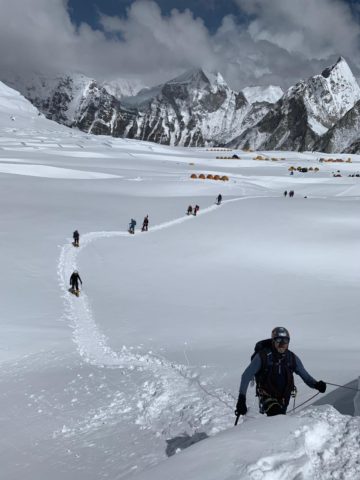 The mountain feels busier than ever this season. Coming down yesterday from Camp 2 we had to wait numerous times in the western CWM as well as in the Khumbu icefall, while other climbers were crossing ladders or ascending steep sections where there is just one rope.  The congestion on the route probably added at least another hour to our descent in total, but it’s nice to take breaks as long as it’s not in a hazardous zone.  I’ve found the route can either be a pleasant and uncrowded experience or a busy experience. We try to avoid peak travel times, but often it’s just luck.  Our strategy for the summit day will be to choose a day that looks to be less busy, perhaps later in the season after the more impatient teams have made their bids. With competent climbers and highly trained Sherpas climbing with us we also have the ability to pass teams or climbers that are moving slowly if necessary.

Thanks Garrett and best of luck to your team and all those on the Big E this season.