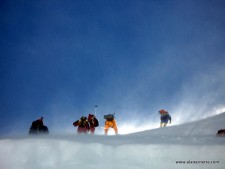 At this point in the season, acclimatization rotations are serious. Many people are either tagging or sleeping at 7,000-meter at the North Col or Camp 3 on the Nepal side. Also at this point is when some people have hit the wall and already left for home. Its crunch time!

The fixed line is now above the North Col and almost to the South Col on the Tibet and Nepal sides respectively.We might see the first summit late this week or early next week by a rope team – IF the weather cooperates.

I often talk about the ones left behind – the spouse, partners, family members who don’t know what they don’t know and reject “no news is good news” axiom.  Jamie Ironmonger‘s spouse, Natile did this great post:

Jamie has just called me from ABC (Advanced Basecamp) at 21300ft / 6492m. Thank you so much to ne – it’s been a difficult few days waiting to hear from him, and it would’ve been even longer without the use of the phone!

Jamie is doing well. He’s had no effects of altitude, he’s maintaining a steady pace and feels good. He has warm feet thanks to the wonderful people at Bridgedale and was even stripped down to his pants earlier as the sun had warmed the tent so much!

He’s making me feel a tad jealous as he’s bragging about having an incredible view of Everest and the North Col from his tent!The team are resting for the remainder of today and tomorrow whilst they wait for the team fixing the ropes to make the North Col accessible, and then they’re off for a further rotation up and back again.

As always, I’ll keep you posted whenever I have news.  Thank you again for all your continued support.

Back to Base Camp after acclimatization half way to camp3. Our original plan to climb Lhotse on 3 or 4 May is postponed for now because of too much wind in upcoming days. Will go for Makalu before Everest and Lhotse. Our Makalu team has already set up camp-3 which is our final camp before summit.Time to Roar on 8000m one by one.

This is good post from Caroline Leich. A few days ago, she was down and out, sick in her tent. She was wise and allowed herself to be sick and heal. Today’s post is good news from her:

I’m feeling better after spending two days of rest in the tent. Today, we did an acclimatization hike to almost 18,000’. One of the great challenges of high altitude is letting go of the ego. It’s hard to go so slow, at your own pace, when you know how quickly you can move at lower altitudes. Listening to your own body vs. trying to compete with others is something I am continually trying to improve.
It looks like we have two more nights at basecamp and we are planning to move to interim camp on May 2 and advanced basecamp May 3, weather and health depending! I am excited and nervous to get up higher on the mountain.

Climbers are doing laps on the Lhotse Face for their final acclimatization rotation before returning to EBC and waiting for the ropes to be fixed to the summit and a window of 4-6 days of low winds. The For Ranger group tagged Camp 3 (I’ll discuss sleeping there in a later post) and gave us this update:

Pete: We’ve just got to Camp 3. Epic climb up Lhotse face now at 23293ft, bit chilly!!! Sambo loving it!! Vertigo cured after that climb, frigging steep. Took 3hr 32 from Camp 2 and 680m vertical ice climb – nice view. Only 3 of us got up here – one got chest infection and other has acute mountain sickness (AMS) but ok