The biggest fear on both sides of Everest today is if a huge weather front moves in with big winds and heavy snow bringing a halt to the rope fixing efforts and acclimatization progress.

The fixed rope to the summit from both sides are key. On the Nepal side it is now between the Yellow Band and Geneva Spur, almost to the South Col which will open up the route for summit attempts. On the Tibet side, it was last reported a bit above the North Col around 7,000-meters.

I’ve been talking about the cyclone in the Bay of Bengal for a week now with comments from Chris Tomer of Tomer Weather Solutions and Operational Meteorologist Michael Fagin at Everest Weather. Now it is time to see what really happens.

This is the outlook:

Adventure Consultants, arguably the most experienced operator on the Nepal side has an eye to the weather:

Tropical cyclone Fani has been brooding in the Bay of Bengal for several days. How much it affects us here, hundreds of miles away, remains to be seen. It could create major disruption to the airflow over the Himalaya, bringing snowfall and winds. Or it could change course and have a lesser effect, time will tell.

So, for now, we are waiting another 24 hours to see what develops. There is plenty of time in our schedule, and a potential storm that halts our progress would also likely stop rope fixing higher up the mountain. The rope fixing team have made it above Camp 3 towards the Yellow Band. Above the Yellow Band lies the Geneva Spur and beyond that the South Col. So progress is good and we need to be a little patient. 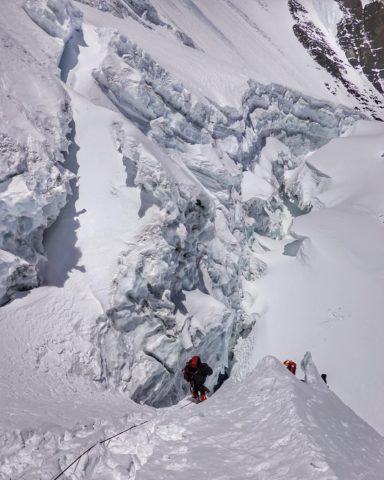 One Response to “Everest 2019: Eye on the Weather”