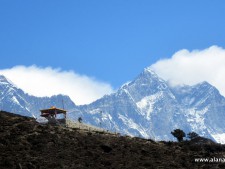 Its really kind of quiet right now, especially on the Tibet side of Everest. Teams are wrapping up their acclimatization rotations and Sherpas are busy dodging wind and rock to stock the high camps.

Lots of talk about when people will summit Everest. There may be a small train following the rope fixers on the Nepal side, something they really don’t like as they kick rocks and snow down and don’t want to be slowed up worrying about the safety of others. They usually request everyone stay lower and climb the day after the ropes are fixed. On the Tibet side, they have strict rules everyone seems to follow.

May 10 was a suggested day the ropes will get to the summit, but the jet stream will have the last world on that. Some weather forecast call for strong winds for the next 5 days with a little window near the 13th-14th of May & then maybe some relief around the 23rd.

Anatoli Boukreev coined the phrase “touch grass before the summit” and by that he meant walking down to one of the lower villages, not flying 🙂 Regardless of the mode, this has become quite famous on both sides of Everest.

Going lower allows climbbers’ bodies to enjoy higher oxygen levels above the 50% density found at base camp. Sleeping off the floor, eating different food, rejuvenates many. Today there are many teams at the villages of Namche and Tingri enjoying these luxuries  Some teams on the Nepal side are keeping the helicopter companies very busy by chartering choppers to take them to the lower villages for a few nights of rest and recreation; some teams have gone as low as Kathmandu and stayed in 5 star hotels. The cost can range from $2,000 to $5,000 depending on destination – one way – and is usually split among 3 to 5 people. One downside of this strategy is exposure to the bugs new people have that you have avoided for the last month. It’s a real risk that has stopped a few people from going to the summit.

The 65 North team is back at Camp 2 and weighed in on how many people were heading back up after hunkering down during the Cyclone:

“Very tough day… Arrived at C2 in just under 9 hours, that’s including stuck in heavy traffic on the icefall. Soon as we reached Camp 1 we had a short break and made our way up the western Cwm in the intense heat towards C2. We are all extremely tired now and have just had some lunch. Feeling good though so no issues apart from needing to rest up and recharge”

IMG reported that their Sherpas made it the South Col:

Meanwhile Madison Mountaineering has clients flying back to Namache or trekking to the lower villages to recover from the ails of high altitude:

Today our team started the first day of the “drop back” where we go back down valley to rest and recover in preparation for our summit rotation.  Some members were able to fly to Namche, where they are staying at the Panorama Lodge.  And other members of our team have hiked down valley to Pheriche on their way to the village of Debuche for a few nights.  All’s well here in base camp.  Our Sherpa team is heading up tonight to Camp 2 to start working on carrying loads to the South Col.  We are just waiting for the winds to drop down up high on the mountain so we can get back to work for rope fixing towards the summit.  All’s well here on Everest, we’ll check in soon!

With the rope fixers on holiday, waiting for the jet to move, most of the action is between BC-ABC and the North Col. Given that most of the teams have already spent the required night on the Col, they are now back in CBC waiting for the ropes and a weather window.

Summit Climb reports in from holiday:

Hi this is David O’Brien from the luxury of the Chomolongma hotel in New Tingri. We’ve come down to a lower altitude to soak up some oxygen rich air ( all relative at 4200m). Last night we tried to eat everything on the menu at the local happening restaurant run by a Muslim family from the Gobi desert. Some seriously spicy dishes came out, nothing went back.

Topo Mena and Cory Richards are back at the Alpenglow base camp for a little recovery before their new route attempt. Topo checked from Instagram:

It’s time for a little break! After almost two weeks at 6400m, having touched 7000m meters a couple times and a bunch of wandering around the East Rongbuk glacier, now the winds are limiting our options to continue progressing with our acclimatization process, so instead of sitting around for the next few days we decided listen to the mountain and hike down to Base Camp, breath some thick air and come back in a couple days with the batteries renewed!!!

The anticipated Polish K2 winter 2019/20 expedition has been cancelled. Primary reason is a lack of qualified climbers.