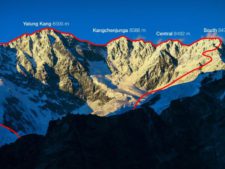 A desperate situation is underway with everyone doing what they can to help Indian climbers Biplab Baidya and Kuntal Karar who are in immediate need on Kangchenjunga. Rescue efforts are doing their best to save these two climbers but it is getting dire.

Nirmal ‘Nims’ Purja and Mingma David Sherpa and Gesman Tamang who made the summit for their 3rd 8000er, after Annapurna and Dhaulagiri, gave their assistance but it appears to have done all they can.

Apparently the two climbers have membership with Global Rescue who gave me this update:

I wanted to let you know about an unfolding situation on Kangchenjunga that we believe involve some of the same individuals as the recent Annapurna events. Earlier today, two of our members were unable to continue their descent from near the summit due at least in part to altitude ailments, hypothermia and snowblindness. Based on his social media feeds, Nimral Purja “Nims” was nearby and he and his team are involved in the rescue.  https://twitter.com/nimsdai/status/1128636607047839744

At present, they are bringing the climbers to Camp 4 planning to spend the night there and then attempt to bring them to a location in the morning from which we are standing by to evacuate them – likely camp 2. It’s notable that at last count, Global Rescue has performed 478 operations in Nepal including 278 evacuations since 2013 so our teams on the ground in the area are monitoring this very closely. We can provide you with information as it becomes available.

However a later update says they are not in C4 per Dream Wanderlust, an Indian website that tracks all things Himalayan, especially for Indian team posted:

The Sherpa team, trying to rescue two injured Indian climbers Biplab Baidya and Kuntal Karar, have returned to Camp-4 of Kangchenjunga, as reported from the Base Camp. Even after the herculean rescue operation, performed by Nirmal Purja and his team yesterday, their sincere effort yielded no positive outcome yet. Unesh Zirpe, leader of the expedition team Giripremi from Base Camp says this morning,”There is almost no hope that any further rescue is possible bring Biplab and Kuntal back to Camp-4 at this stage.” Similar version was affirmed by the head of the Agency. Both of the sources have confirmed that their is almost no possibility that any further rescue effort can save these two lives.

Ramesh Ray, another climber from the same team, was also rescued by the Sherpas and brought to Camp-4 at around 10 PM. His health is also on the verge of critical deterioration, suffering from altitude sickness leading to HAPE (high altitude pulmonary edema) and snow blindness.

Climber Rudraprasad Halder, now staying at Camp-4 is also found to have suffered from frostbite as per the latest information received from Base Camp this morning. Both Ramesh and Rudra would be evacuated by rescue heli from near camp-3 this morning, as Keshab Prasad Paudyal, head of their handling agency reported this morning.

Biplab Baidya, Kuntal Karar, and Ramesh Ray were part of a five-member team from West Bengal for their Kangchenjunga expedition. Four (Sk Sahabuddin, Rudraprashad Halder, Ramesh Ray, and Biplab Baidya) amongst them, have reportedly reached the summit point yesterday in the morning. Afterward, Biplab and Kuntal fell sick on their way down and asked for help from an altitude above 8000m. It was believed that Kuntal was suffering from HAPE. One team member (possibly Rudraprasad) sent an SOS to their family at around 3:12 PM via GPS device asking for urgent help. Device read an elevation of 8271m.

Nirmal Purja with two other Sherpas Gesman Tamang, and Mingma David Sherpa, are said to have responded promptly to the request for the rescue operation from an altitude of 8200m. They (Purja and his fellow team) were on their way down from the summit of Kangchenjunga. Also, by then, three more Sherpas from Peak Promotion Agency, had left Camp-4 to join the rescue operation, with life support as reported by Giripremi from the Kangchenjunga Base Camp.

I will update as new information is available.

Update: News reports say the two have died after being unable to be rescued.

My condolences to their families.,