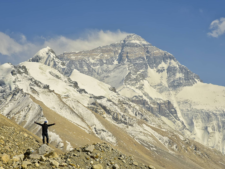 We have more summits on Wednesday, May 15 and a few more are trying to get on top of Everest on Thursday morning as well. Overall it was good day with low winds but cold temps. But this window is closing on the 16th and the next doesn’t look great.

Update: Climbers on #everest2019 making good progress this Thursday morning. As of 2:15 am local, most are around 8400 meters /27,500-feet between the Balcony and South Summit. This is when the mind game become important. Weather good.

Big Picture – A Bit of a Wait for Tough Climbing Conditions

I reached out to yet another world-class weather forecaster for his views on these windows. Marc De Keyser is well known throughout the climbing world for being one of the most accurate forecasters not only for mountains but also for the Antarctic. This is his view for Everest over the next week or so:

it has sure been an interesting season, weatherwise. And actually it still is. In my forecast this morning i highlited the presence of the subtropical jet stream (SJT), meandering from East China via central Nepal, NW India across the Indian Ocean towards North Africa. This feature dominates the weather conditions over the Himalayas for this period, probably till the 23rd or 24th of May.

The STJ will constantly be in the vicinity of the Himalayas: the good side of this is that the air mass does not become very unstable and it is unlikely that we will get any significant convective development (thunderstorms) during the next week – so pretty good atmospheric will prevail. However the proximity of the jet generates a situation where it is likely that the +8000mr wind has to be taken in account almost every day again.

I am pretty sure that on the 17th and the 18th wind will be far out of limits, where on the 19th the wind becomes again a bit weaker but still generating an uncomfortable feeling. And that is what i expect also for the period beyond the 19th. Winds varying around 20kt: not strong enough to cancel the climb but not weak enough to be pleasant. So i expect that it is going be tough.

Of course we all know that long range forecast are always prone for significant changes. Lets hope everyone stays safe and no significant accidents happen.

More for May 16 Happening NOW!

I’m sure there are more than one teams who are on their bid Wednesday, May 16, 2019 for a Thursday summits but I only know about :

Madison Mountaineering‘s Garrett Madison and Himalayan Guides who are hosting/managing the rope team said 8 Sherpas got the ropes to the summit at 1:15 on the 14th. No members were reported to have summited.

Imagine Nepal’s Mingma Sherpa put 12 people on the summit of Lhotse on Tuesday, May 14th including the first Greeks and Pakistani.

A fun video of the Everest rope team on the summit Monday:

“Rope fixing is really hard on Everest. Especially, on the last summit day but we have done the work and we feel really proud”, Ang Purba Sherpa, member of the rope fixing team told Dream Wanderlust today from Everest Base Camp.
“But the weather was so nice,” he added. Summit Video from Ang Phurba Sherpa, one of the member of rope-fixing team.

That side is preparing. Rolfe Oostra Mountaineer at 360 Expeditions gave us their plan:

Very loosely dated between the 22- 28 May on the hope that the winds blow themselves out.

Thanks for all the birthday wishes – Would like to reply everyone but access to Facebook in Tibet is limited. We are at Base Camp 5200m preparing for our summit attempt. We were sleeping at North Col 7100m beginning of May and all were feeling fine, though in the morning we got hit by 40-50knots gusty winds. Feelt like a small earthquake every time these winds from Cyclone Fani hit. We lost a few tents as Well.

Right now our Belgian weather forecaster Marc De Kayser expect High winds until 21th May and we hope to make our summit push 23-25th May, though still uncertainty about the weather. The Chineese with better weather forecasts are expected to move for summit 21th/22nd. We have fixed ropes to Camp 3 and sherpas have prepared our Camp 2. So starting to look promishing. O2 saturation is at 87% and eating like a pig