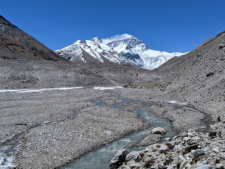 There were 14 summits of this next, and perhaps next to last, window of the spring 2019 season early Monday morning, May 20, 2019. Meanwhile literally hundreds of other climbers are moving up the gauntlet of camps getting ready for their time on the summit. Its Summit Madness!

First off, it cold on the summit of Mount Everest! With the jet wobbling around today, teams are pushing hard to summit and get back down. Usually it is a week long process:

Now the big question is what the jet and winds will bring to both sides. The best companies on both sides have paid for 2 or more professional weather forecasters and are not using free Internet sites. However, secrets on Everest are like those on a reality game show where everyone knows everything.

A few days ago the winds after the 20th looked to be calm for as long as 5, even 9 days, but now may split into two separate ones. So this means some teams will push hard to get the summit on May 21/22/23 and others will go during May 26/27/28. In any event, we are getting closer to the end of May and the end of the season for most.

There is growing concern about so many people in such a short window with such cold temperatures. Now is when climbing with a highly experienced team is critical to both summiting and surviving.

Mingma Sherpa’s Imagine Nepal got seven members on the summit plus seven Sherpas. They were the only summits on Monday morning to my knowledge but there may have been a few others.

It looks like the winds still may be higher than some guide prefer. Mike Hammil’s Climbing The Seven Summits (CTSS) home team said they are at the a windy South Col:

Note that can only do this due to careful planning that if they need to spend an extra night, they will have sufficient food, fuel and, most important, supplemental oxygen. If a team has not prepared, this is not an option and they either do a very risky summit attempt or retreat to Camp 2 or below. Most members only get one shot at the summit. Oh, and there are no refunds!

Each year, Gyanendra Shrestha, a representative fo the Ministry of Tourism stays at base camp and tries to track who climbs when. He does’t really manage anything but helps with coordination and communication back to Kathmandu. He is key to help manage deaths. On his Facebook page he posted late today:

Teams looking summit Tuesday, May 21 morning and are at the South Col on the Nepal side include:

Nirmal ‘Nims’ Purja and team is at Camp 2 to summit Everest, Makalu and Lhotse within a span of three days, beating his previous record of five days and 10 hours. He posted on Instagram:

@Nimsdai and team are currently at Camp 2. With the plan to be at Camp 4 tomorrow morning and summit of Everest and Lhotse on the 22nd (weather dependent). @nimsdai reports that there is already heavy traffic as more than 200 climbers are looking to summit between 21st and 22nd May.

Adventure Consultants commented on the summit wind chill at ~-50C/-58F:

Recent forecasts for the days ahead have given wind chill temperatures of -50° c. Truly cold conditions that when matched with the depleted oxygen at 8000m, make really challenging climbing conditions. It’s essential to keep moving in conditions like that, so if those conditions potentially coincide with queues or moving slowly, you can appreciate the amount of time we give to making decisions, and attempting to choose the best summit day.

EverestER made a post about the cold a few days ago:

Just how cold and windy is it up there? This case of frostbite occurred in mere seconds, in a climber who removed gloves to change headlamp batteries at Camp 4. This brief exposure resulted in the frostbite we see pictured. 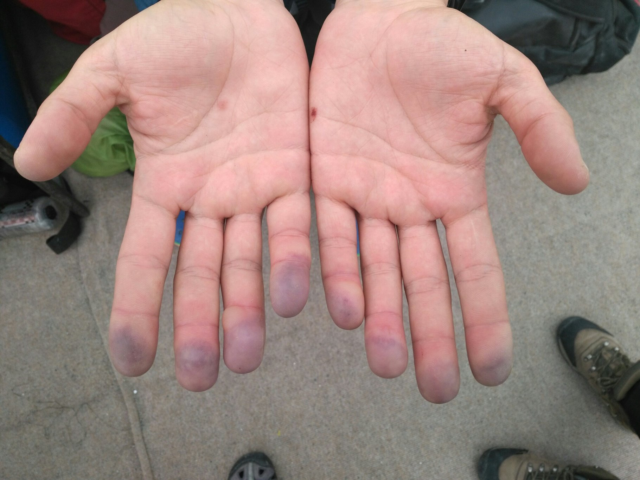 Frostbite on Everest 2019. Courtesy of EverestER

The big news is that the ropes are not expected to reach the Tibet side summit until  Wednesday, May 22nd to the summit weather permitting. This dynamic will create serious crowds on that side given the wobbly jet. 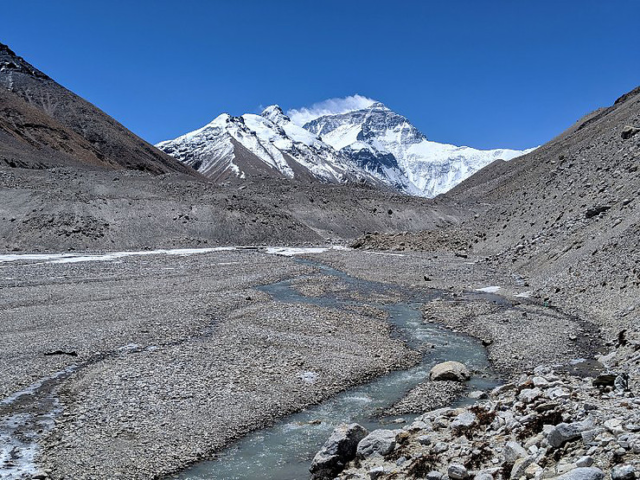 Rolfe Oostra Mountaineer at 360 Expeditions  summed it up nicely from the North Col:

It’s going to be a tough one and there is no getting around that. The weather window looks narrow and with the winds still present it is going to be a cold one. With the narrow window comes strict time frames and cut off points. Rolfe and our Sherpa team have made solid plans for each climber. With a team of 6 you can’t have one plan that suits all.

We are hoping the window opens up a little more and hoping that the wind (which is making it extremely cold) calms down. Every hour brings a change of forecast, making planning very fluid. We are monitoring this very closely.

We have a very strong support team and quality logistics. We can do no more. Now it’s down to the weather gods and each climber to dig deep. Our team of 8 Sherpa and 6+1 climbers are ready! They are buzzing with a mixture of nerves and anticipation and left this morning to ABC. The plan is loose, but looking at a summit push between the 22 – 24.

And from Cory Richards and Topo Mena striving to put a new line in on Everest’s Tibet side, not a great situation. They will leave from CBC at midnight May 21. They will not be giving any updates during their climb. Click here to hear a video from Cory:

The weather window is here. It’s not ideal, but if we wait more, we risk loosing the opportunity. In alpinism, there are never perfect conditions, and that’s part of the process and journey. Taking calculated risks are expected, and luckily in our case, we are surrounded by experts who help us form our decisions.

@estebantopomena and I aren’t proud and machismo attempting to conquer or tame the wild. We are here on our individual journeys, together for a single goal. I feel scared as much as I feel strong. Fear is good – it keeps us safe. As I’ve expressed, my battle with mental health includes anxiety that runs high, and it is one of the factors that keeps me cautious and conservative in decision making. It’s that exact quality now that makes my near-and-dear a little more at ease.

This picture posted by Erich Roepke who is filming their effort, is the gulley where they will begin:

In just a few hours @coryrichards and @estebantopomena set off to make Everest history — attempting an unclimbed route on the north of Mt. Everest (pictured here). -I have been lucky enough as a young alpinist and filmmaker and have the crazy privilege to document these two for @roam as they prepare for the climb of a lifetime. For the past two months I’ve watched them prepare for this task at hand. I can tell you that I have never witnessed such a continuous level of focus for anything. 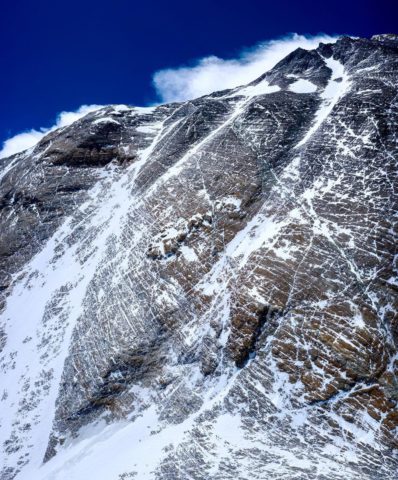 Sung Taek Hong and team have left base camp on their summit push. This is his 6th attempt to scale this route.