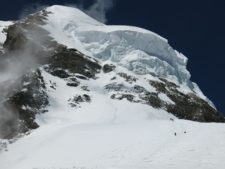 We have more summits on Broad Peak and the Gasherbrum as the excellent weather continues. Many of the K2 teams have left Base Camp hoping to summit starting mid week.

The summit for K2 should begin early Wednesday, July 17, 2019, on both routes, the Česen and Abruzzi. Ropes are set to the respective Camp 4 on both routes

Furtenbach Adventures confirmed they are now on their summit push “Summit push on K2 is on. Weather is still good with low winds. Looking for a potential summit in the next days.”

Today is July 13th, and we had a nice rest day in base camp.  All of our Sherpas have come down off the mountain from carrying loads and fixing ropes to Camp 4 on the Shoulder of the Cesen route.  And our plan is to review our oxygen systems tomorrow and start packing up for our summit attempt.  Our plan is to leave on the 16th of July to head up to Camp 2 on the Cesen route in hopes for a potential summit attempt on the 19th of July.  Everybody’s doing great here, we’ve got nice weather in base camp, and we look forward to another great day tomorrow.

Mingma Sherpa’s team is also on:

Today our Sherpa team is in camp3 and tomorrow morning they will go to camp4 with rope for fixing summit to support team from Abruzzi and also transfer our load to camp4. Half of members are in camp2 now and will climb to camp3 tomorrow and remaining members will climb up to camp2 tomorrow from base camp. All is well and weather is pretty good.

Adrian Ballinger, Carla Perez and Ecuadoran Topo Mena just spent 6 days up high on the Česen and are headed back up on Saturday, July 13. They are preparing their bodies for a no O’s summit attempt later in July, probably the week of July 21. AB posted yesterday:

Two days of rest? Plenty!!! Time to head back up the hill in this incredible high pressure system still sitting over the Karakorum. While many will be attempting the summit this week, we need another acclimatization rotation. Planning 5 days up high, including a night at 25500ft/7800m. It’s gonna hurt, just like it’s meant to!

The team of Seven Summit Treks posted their plan to push for the summit of K2 on 17th July. Got an update from Fredrik Sträng that he is on his summit bid as expected with the other climbers:

It’s time for K2 summit push. Early tomorrow I’m heading up to C-2 then hopefully no later than Friday I will have internet again and you’ll know how it was

🙂 Weather is exceptionally good (my friend Max said: the weather is worryingly good!) so now health is really the only true opponent as I’ve lost a lot of weight and strength due to a hellish viral infection.

He was climbing with David Roeske but no update if he is with Fredrik on this push. Mike Horn is also joining this window:

And finally the time we have been waiting for has arrived! Tomorrow we plan on starting our summit push. We have a clear weather window over the next couple of days, which should give us enough time to make it to the summit and back in good conditions. The ascent will take us about 2-3 days. We will stop in the camps that we have set up along the way to rest and recharge.

Honestly, it looks like all the teams at base camp will join this effort including Adventure Peaks.

The major teams left would include Nirmal Purja who is on GI &II; He posted:

Since, I have summited NangaParbat, it’s been non stop from travelling via road and also trekking both days and night skipping camps in order to hit the timeline. We came through hundreds of problems from vehicle getting struck with mechanical problems, road blocks,and our donkeys were never been able to catch up or cover the ground at the same speed ( generally 5 hrs behind each day ). After experiencing this for 2 days, I came up with a plan that we would carry our full climbing kit by ourselves in order to cover the ground and make the time line. Everyone whom we have met across the journey were shocked when they found out we skipped 3 camps at this altitude carrying heavy gears.
Finally, when we reached Concordia, we found 3 porters to help us and it was like thank god as we couldn’t feel our feet any more at this point.
.
Solving all these problem, I have now finally arrive at the G1 & G2 base camp last night with my climbing partners @mingma_david_sherpa & @geljen_sherpa_ .
Tonight we will head up for the summit push and I’m looking to complete G1, G2 and K2 within a week. “Insallah “

After summiting Nanga Parbat he had accomplished seven of his goal of all 14 8000ers within 7 months. He summited Annapurna, Dhaulagiri, Kangchenjunga, Makalu, Everest, and Lhotse in April and May. Hopefully this good weather will last into next week allowing them to run over and nab K2. I wouldn’t be surprised to Ballinger and Nims team up on K2. I’m unclear when he expects to get Broad Peak.

Lydia Bradey reported that Billi Bierling,Dean Staples with the Kobler & Partner team and many others over 15, all  summited BP. It’s unclear how many didn’t use supplemental oxygen but all were hoping to.

Karakorum Expeditions reported that Benjamin Chan, 19 years old and the youngest climber from Hong Kong, along with KE’s youngest guide Ahmed Baig 20 years old from Shimshal, Hunza summited Broad Peak on 14th July, 2019. Also Pakistani climber Shehroze Kashif, 17 years old,  along with his guide Akbar are said to have summited on 14 July according to Fareed Gujjar owner of The Trekkerz Xpress.

Turkish climber and North Face sponsored climber Tunc Findic made his 13th summit of an 8000er on GI. He only has Nanga Parbat left.

Matthew Randall & Matt Gorbett are on their summit push hoping to ski down. Denis Urubko and Pipi Cardell are on a new route on GII. No recent updates. Also, Marco Confortola with Ali Durani have competed two rotations and are back at base camp.