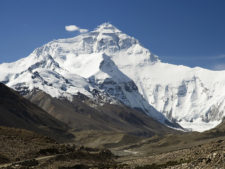 With the number of cases and deaths attributed to the coronavirus growing daily, there is new speculation that China may take more action, thus impacting the spring Himalayan climbing season in Tibet. There are three 8000-meters peaks with routes in Tibet: Everest, Cho Oyu, and Shishapanhma. In Spring, Everest has the most climbers, usually around 200 plus a similar number for support. The other two are more popular in Autumn.

The International Federation of Sport Climbing (IFSC) recently issued a press release discussing the threat and canceling an event located in China that was scheduled for April 2020.

After expert consultation, IFSC President Marco Maria Scolaris has confirmed that due to the Coronavirus outbreak, no IFSC events will take place in China in April 2020.

It was decided that in order to safeguard athletes, officials, and spectators alike, the two Sport Climbing world cups planned this April in Chongqing and Wujiang, China, are to be rescheduled.  The IFSC is studying viable solutions (i.e. postponement or rescheduling) for the two events and will release their results in the coming days. The IFSC would like to offer thanks to the Chinese Mountaineering Association (CMA) for their support and hard work in organising these events, our thoughts are with the Chinese community and victims of the Coronavirus.

Specifically, they canceled the IFSC Asian Championships – a qualification event for the Olympic Games Tokyo 2020, which was to be held in Chongqing, China.

And Montagna.TV made this note of the Chinese not issuing a permit for a new route on Cho Oyu this spring. As usual, the Chinese did not state a reason, and Montanga wrote, “Unfortunately, the China Tibet Mountaineering Association is not issuing permits this year except for climbing along normal routes. ” they also added:

The current public health problems in China and the consequent embargoes due to coronavirus should not be underestimated .

Two other sports events located in China have also been canceled,Gaoligong, the race of the UTMB circuit on Chinese soil, initially scheduled for March 21-23, 2020, and the Yanqing challenge of the Alpine Skiing World Cup.

Clearly, climbing Everest from the Tibet side doesn’t involve the same number of people as these other events, so it’s way too early to panic. If you have a trip planned in Tibet, this may be the year to invest in trip cancellation insurance. Just verify with your insurance company that you would be covered if China closes Everest due to the virus. Also, traveling overland from Kathmandu instead of flying through Lhasa, may be warranted. Check with your guide company, but I suspect they won’t know anything at this time. Climbers usually arrive in early April, about seven weeks away, for Everest northside expeditions.

The Chinese have been known to make dramatic last-minute decisions around Everest. In 2008, they notified operators in late March that they would not be allowed to climb Everest until mid-May, too late for everyone. They took the Olympic torch to the summit and feared protests in the background while they televised the event nationally. Their side of the mountain was effectively closed that year.

For reference, the SARS outbreak was in 2003. I went to Everest that year. SARS was considered more contained than this one. The first SARS case was diagnosed in November 2002, and travel notices were issued on March 29, 2003, after it had spread, so most people had already arrived in Nepal or Tibet for their climbs. The travel alert was lifted on July 3, 2003, and the threat was declared contained on July 5, 2003.

2 Responses to “Will the Coronavirus Impact Spring Everest Season?”