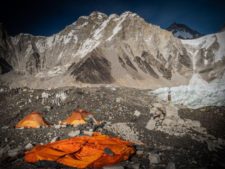 The good news is it is a bit warmer on both Everest and Broad Peak, the bad news, it’s too windy to climb. Time is running out for Urbuko on Broad Peak. Porters are coming on February 20.

Alex Txikon and team were hoping to leave EBC for Camp 3 or even 4 at the South Col but high winds at EBC flattened tents and gave them pause about conditions higher. So they are holding for a bit more. Txikon’s posted this update on Facebook and Twitter

As we mentioned yesterday, Everest can hit us really hard – even in Base Camp! The wind has flattened our tents, despite being cutting-edge, best quality equipment. But 89km/h gusts are unforgiving. We wanted to set off tomorrow, but that’s not going to happen. Cheers! 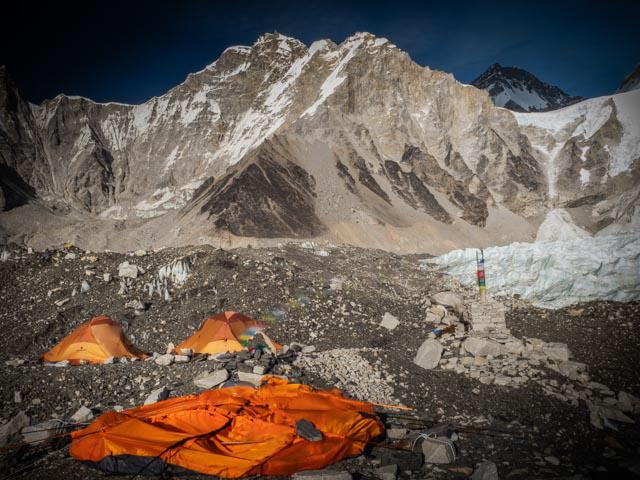 German alpinist Jost Kobusch, returned to his Camp 1 at 5933 m | 19465 ft but the big winds are probably giving his pause as it did for Txikon.  In review, he plans on a winter, solo Everest climb without supplemental oxygen and no Sherpa support. This exact style has never been attempted or accomplished. You can track his location on this excellent map from 3D Reality Maps. He has this update Tuesday, February 11, 2020, on Facebook:

Just checked the weather forecast – the temperatures tend to rise – spring is coming! Summit temperatures of minus 69, like yesterday, are no longer in prospect. Today it is less windy – 20km/h wind and up to 60km/h gusts. For the lower part of the route this would be fine, but from tomorrow on in the upper part of the mountain there will be constant wind around 40km/h and gusts around 100km/h for the next days. As a benchmark➡️in good weather, a summit ascent could work if the gusts reach a maximum of 40km/h and otherwise it’s rather 20km/h wind – and even that would be damn cold! 🤪☀❄ Small disclaimer: The weather forecast yesterday was definitively refuted – it was the opposite of what was announced!🙈 I decided to go up again and see how the conditions are ‘really’ – without a doubt the wind is blowing at the summit but maybe I’ll still manage to have a look at the upper part of the route.

Denis Urubko is taking short walks to stay fit and prevent extreme boredom as he waits for the next window in a week or so. From montagna.tv

Quick translation: Denis feels strong. He went down to Concordia for training (4h walk). Next good weather window will be 16-18 February…MAYBE there will be an attempt to summit. February 20 the BC will be dismantled