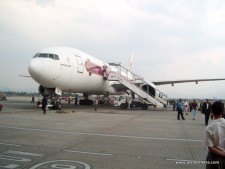 Arriving in Kathmandu for an Everest attempt is surreal, especially if it’s your first time there. You can be anxious about meeting your teammates, adjusting to a new culture that will be home for two months, the new food, and more.

While this story is fictional, there are real people climbing Everest in 2020. A team of 25+ Chinese gained an exception from the Tibet Mountaineering Association (TMA) to climb from the Tibet side. China has closed all its mountains to foreigners. I assume the Chinese climbers were clear of COVID-19. I don’t expect any updates from them because similar to past years, Chinese teams do little public social media while climbing, and the TMA rarely responds to inquires. Chinese operator Yarla Shampo Trek is managing their expedition.

Inexplicably, a group of British trekkers made it all the way to Everest Base Camp, unaware of world events. They were told they had to stay at EBC for three days for quarantine, and there was no flight from Lukla to Kathmandu. Eventually, they made it back to Kathmandu and the last update had them trying to get a flight home.

In current news, the Nepal Tourism Board issued a statement that all foreigners stranded across the country who wanted to go home must be back to Kathmandu by April 3. After that, no in-country evacuations would be coordinated. In Kathmandu, it would be up to the local embassies to coordinate any repatriation. In this sense, several counties, including Australia, German, the UK, and the US, have charted flights for their citizens trapped in Nepal. A US chartered Qatar flight flew 302 Americans out on March 31, 2020.

As my long-time readers know, I summited Everest, K2 and Island Peak plus made several other climbs with Kami Sherpa (Ang Chhiring Sherpa – Pangboche). His son Mingma told me over the weekend:

Here in pangboche everyone all the villagers are working in the field growing potatoes, garlic, barleys, spinach etc as no expeditions this time, All men are helping in the field. We all villager did some puja yesterday to pray that the virus would abolish soon. Otherwise it is good here in pangboche till now

The lumbering 777 bounced on the new Tribhuvan International Airport runway, brakes working hard to stop the 500,000-pound flying machine slowing from 172 mph. Peering out the small airplane windows, She saw the small brick airport terminal, multiple planes from around the world parked outside the terminal’s glass doors. As the flight crew opened the doors, the fuselage became engulfed in warm, moist air. A monkey was comfortably resting on top of the terminal. She was not in Kansas anymore!

Stepping onto the tarmac, She paused and glanced around. The ground crew was hurrying everyone to get on the bus for the 100-foot drive to the terminal. With a quarter of the plane on the bus, it took 30 seconds to drive to the terminal, where they shuffled off and began navigating the halls towards the Customs Room.

Inside the large wood-paneled square room, a row of desks occupied the right side, the “Visa on Demand” booth directly in front, and several stand-up writing desks to the left to fill out forms. “Do you have a pen?” She heard over and over. She had registered for her visa on Nepal’s website, but She still had to give them her $125 for a 90-day visa. Sensing a herd mentality from the 348 fellow passengers, She went directly to the booth. It only took a few minutes and then over to the passport desk. She stood in a Disneyland-like winding line for her turn. She felt nervous.

“Are you trekking?” A man with a strong Dutch accent standing behind her said casually as he stared at her trekking shoes. He had his boots slung over his shoulder trying to avoid excess luggage fee. His 70-liter pack, on his back, appeared full. She turned around to see a tall man, maybe 6-foot 6 inches with a head of blond curly hair that touched his shoulders. “No, I’m climbing.” She replied in a friendly tone. “Hey, Us too!” said a young man standing next to what appeared to be his girlfriend. “What are you climbing, Everest?” asked the girlfriend with a sly grin on her face. “Yes.” “I am also,” said the curly blond. “We are, too, said the boyfriend.” “Who with?” She asked in amazement, thinking what a small world it was. “Mount Everest Guides.” And with that, She met three of her teammates standing in line to get into Nepal.

The emotionless Immigration Agent took her paperwork, her precise 2-inches by 2-inches black and white photo along with her fresh visa, and pushed them through the tray under the smudged glass that kept them apart. He pulled the documents onto his desk, flipped through her passport until he found a blank page. With overriding authority as if making a statement, he slammed the chrome rubber stamp with vigor onto her passport, declaring without words that She had followed all the rules and now could officially stay in Nepal for 90-days. He pushed the passport and a pile of other papers back through the slot, never making eye contact with her. This process would be the last semblance of rules She would witness in this mountain kingdom. As She walked by, he glanced up. “Welcome to Nepal. I hope you enjoy your stay.

She went through a huge x-ray machine and put her small backpack through another device. The operators deep in conversation, not noticing the images on their security monitors. Down the escalator, She entered the baggage retrieval hall. Tribhuvan was built in the 1990s, and little updates had occurred in this poor country. Hundreds of passengers jostled for position near the three baggage carousels. She ignored the crowds to find a luggage cart and wheeled it over to carousel number 1. The rubber belt bounced up and down as heavy bags stressed its capacity. With a groan, the belt stopped, the passengers let out a similar groan.

With no motion for 15 minutes, She and her fellow teammates made small talk but kept one eye on the small half door that led to the tarmac. She fidgeted with her wedding ring while putting positive energy into the room. She was anxious to get an Ncell SIM for her iPhone and call home. She already missed her kids and husband. A loud creaky blast broke her concentration as the belt started back up. Her North Face yellow duffle parted the heavy rubber straps and entered the Hall. “There’s mine,” She blurted out to no one. Her forehead creased up as She waited for the next one. One by one, each of the four climbers waited patiently for their bags and helped each other wrestle the 60-pound beast onto their carts.

Leaving the stifling Hall, they went through another unstaffed x-ray station and walked outside the airport terminal. For the first time, She felt like She was really in Nepal. Over 100 men dressed in long pants and light short sleeve shirts held up signs. Each had the name of a hotel, a tour operator or a person’s name. “There it is, Mount Everest Guides!” The boyfriend called out. With a huge grin, a brown-skinned tanned man with dark black hair and exceptionally white teeth approached them around the long rail.

“Namaste, I am Dawa. I will be one of your many Climbing Sherpas to help you climb Mount Everest.”