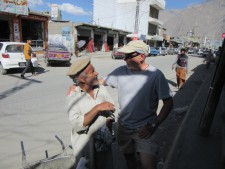 Since we just arrived at 8, 000’, try we are taking a rest day today to help our bodies acclimatize and for the last of our bags to show up.

Sitting in the dining room of the hotel here in Skardu. I suddenly felt a strong sense of history – yesterday and tomorrow’s. It is a Tower of Babel of languages, but everyone shares the same dream – to climb a mountain. Over an extended breakfast, I spoke with living history. The first was on my team, Rick Sylvester and his son Terray.

Rick, who is known by some as a stuntman for 007’s Roger Moore in the opening of The Spy Who Loved Me (the ski chase in the title sequence) and For Your Eyes Only where he was the film’s climbing sequence technical advisor. In that film he doubled in the rock climbing scenes where Moore’s 6’5” stature was a challenge for the 5’6” Rick – Rick says the $700 wig made the difference!

But Rick is more proud of his climbing. He was one of the original “dirt bag” climber in Yosemite back in the 1960’s, making the 15th accent the Nose on El Cap, climbing with legends including Royal Robbins, Yvon Chouinard, Don Whillans, Dougal Haston and Layton Kor. (shout out to Kor’s great nephew and my friend and climbing buddy Barry Johnson).

His son Terray, named after Lionel Terray the famous French climber on the first 8000m ascent, Annapurna, is trekking with us. Terray had a summit of the first day of his life when Rick took the newborn to the top of a boulder near Truckee on the way home from the hospital. Mom didn’t have a chance to object but did capture the event on film. They had done the same with their daughter, Cheyene, a few years earlier.

Rick and Terray have done a lot of climbing together which has Terray saying he is most happy when he is in the mountains. Terray says even when they were visiting colleges, they bivied in illegal areas to save a dollar.

While climbing the Post Office Crack near Opher Colorado, father and son used some old ropes on a rap, thin 8mm worn from previous use. They barley survived the experience, smiling when they talked about it, exchanging knowing glances.

One of his most memorable climbs, Rick says, was on the first ascent of Son of Heart in Yosemite in 1970, a 10 day effort where they ran out of food and water in late July with 100F temps – water became an issue. Rick did all the leading with his partner belaying for 10 days.

Which brings us to the question, why is Rick climbing K2 at age 72? He gives me some quips then says with ease, “I want to climb everything in the world.”

But an epiphany occurred in 2010 when he failed to do one pull-up after decades of doing 103 pull-ups every other day – let that sink in – 103 pull-ups. At age 68, said he wanted to rebuild his body using CrossFit and he has. Looking determined, and fit, he sits quietly when asked what is success on K2?

He squints his eyes a bit, and as his jaw tightens he begins: “Getting to the top, not base camp, not the cultural experience. This whole thing is a gamble for me – a lot of time, money, effort. I don’t like being a member but I can’t do what I once did, carrying the loads, cooking. So this time I will just climb”. Spoken like a true climber.

Across the dining room at the Concordia Hotel in Skardu, two young men with dark rubble listened in on our conversation, we invited them to join us.

28 year old Phillipe Quardernas and 24 year-old Roberto Morales from Quito Ecuador, are climbing the difficult world class rock climb, Trango Tower. They plan on spending 15 days on the Tower, just the two of them. If they have time, they will try Nameless Tower and perhaps a few others.

As we talked about their plans you could see a mixture of apprehension and excitement. They talked about struggling for money to get here, their previous climbs in Patagonia, the idea of using portaledges at 18,000 feet, carrying their own gear – the sense of ambition was contagious. Their website is www.fluxadventures.com

We leave Skardu with these new friends tomorrow, I look forward to being part of such dreams.

The Young Against Alzheimer’s

As I spoke with Rick, Phillipe and Roberto, I was struck by the fact that dreams do not know age.

Back home, I have been honored to get to know an impressive young man, Max Wallack. At age 18 he has made a huge mark in the world of Alzheimer’s advocacy.

Watching his grandmother die from the disease he dedicated his young life to finding a cure for Alzheimer’s.

His book, Why did Grandma put her Underwear in the Refrigerator”  does a wonderful job of telling their story. Max’s foundation, Puzzles to Remember , has distributed more than 25,000 puzzles to Alzheimer’s facilities. He is now studying at Boston University. To learn more about Max, please read this interview.

So, we rest today and hit the road tomorrow in tricked out Jeeps designed to withstand an all day ride to Askole on trails that are called roads in these parts.

There the real work begins, we start our trek to K2 Base Camp.  Pictures and updates along the way!

Garrett posted the team roster on his site:

Climb On!!!
Alan
Memories are Everything