Climbing continues on Everest’s north side with over 100 climbers making steady progress with their acclimatization rotations. Also, teams on Cho Oyu and other Himalayan 8000m mountains are preparing for their summit pushes.

The only place it is not business as usual is on Nepal’s side of Mt. Everest where April 18th will be remembered forever as the day 16 Sherpa climbers lost their lives. 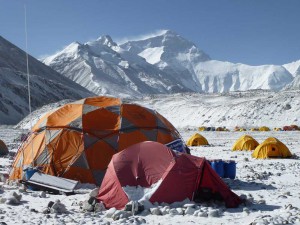 The rope fixing by the Tibetans from the China Tibet Mountaineering Association, CTMA, continues toward the summit as members with commercial teams are spending time at Advanced Base Camp and even the North Col to acclimatize. The reports have been steady with no issues noted, including decent weather for a change on that side of the mountain.

Hello! This is Alex Abramov from a height of 6400 meters, from advanced base camp. Today the first team (8 people) is here . We had breakfast , now it will be held ice classes. We will train ascending on fixed ropes, because tomorrow is our first team goes to the North Col of Everest in order to spend the night at an altitude of 7000 meters. The second team of 11 people spent the night in the Middle camp , and now rises toward the ABC camp. Tonight should all meet here. All feel fine, acclimatization goes according to plan, that is, sufficiently smooth, soft acclimatization.

Adventure Peaks gave us a great shot of Chinese Base Camp with Everest looming in the background.

The Triple 8 Team looking to summit Cho Oyu, Everest and Lhotse is leaving today for the summit of Cho Oyu. But they have also been working hard to find a way to keep part of their dream alive now that climbing from Nepal is not an option. Jim Walkley posted this on his blog:

Obviously, we are intently focused on the next several days, but many are wondering (as are we) what will be next now that the climbing season on the south side of Everest has come to an unfortunate conclusion.  We are looking at all options, but the Everest-to-Lhotse link-up is no longer possible due to us being unable to climb from the south side as we had originally planned.  Our preferred Option B has been thwarted thus far due to an inability to obtain the climbing permit we need, but we are pulling out all the stops and will not give up until time runs out on us.  We have Options C & D in our sights as well, but we will not pivot to those until we absolutely must.  Sorry to be so cryptic, but I will share our plans once we’ve completed our adventure on Cho Oyu and know with certainty what our next objective will be.  Stay tuned.

There are few if any teams now left at Everest Base Camp on the South. A few gave it a valiant effort to stay in hope the Icefall Doctors would relent and manage the route, but it does not appear to be the case.

Local helicopter companies offered to ferry climbers into the Western Cwm for $2000 per climber per trip, but no one took them up on this offer.

The operators began the long precess of negotiating with the Ministry of Tourism for refunds of permits, trash deposits and other costs associated with Everest 2014.

Guy Cotter, Adventure Consultants told of his unsuccessful efforts to use helicopters to bypass the Icefall for gear. The Nepal Government did allow helicopters to retrieve some gear this year and to store gear in the Western Cwm. I fully expect this to become the standard and for 2015, almost all gear, but not members and Sherpa climbers, will be taken to the Cwm using Helicopters and not Sherpas.

They also began the process of dealing with members wanting refunds. Others are already promoting their autumn climbs on Cho Oyu or Manaslu or even for Everest in 2015.

But the real mourning began for the families of the fallen Sherpa.

Apa Sherpa, who is tied for the most Everest summits with Phurba Tashi at 21 gave a impassioned plea to “Leave Everest Alone” to his local Salt Lake City newspaper:

“It feels like the mountain needs to rest,” Apa said from his Draper home after returning this weekend from a trip to Nepal for the Apa Sherpa Foundation. “Too many people are climbing. Leave Everest alone. Everest will always be there. The mountain isn’t going anywhere. They can try next year.”

Other Sherpa began to weigh in as well with a few high profile ones saying privately they will never climb on Everest or any other dangerous mountain again.

Some member climbers tried to switch to the North but were told that the CTMA is not issuing new permits at this time. Others are still trying to leverage their travel to Nepal with climbs on Manaslu, Makalu or some of the trekking peaks.

Those back home or in Kathmandu are posting their own views of what happened this year as well as their future plans. Use the list on the side of this page to see if your favorite has updated their blog.

Finally, The Discovery Channel will broadcast the 90-min documentary, “Everest Avalanche Tragedy,” in the US tonight. They were at Everest to film Joby Ogwyn‘s wingsuit jump off the summit but canceled the broadcast after the Sherpa deaths. Alpine Ascents was providing support for the filming and lost three Sherpa in the serac release. Ogwyn told the Los Angeles Times:

“I think it’s their right to,” he said of the Sherpas’ strike. “It’s very fresh in their minds… But life goes on. It’s going to be pretty hard for a lot of guys to make a living if they don’t want to work, including myself. I don’t want to find something else to do and I think a lot of Sherpas in that region take a lot of pride in what they do. Everybody, Western people and Sherpa, needed to take some time to let this sink in and go away a little bit before we start planning the next season on Everest.”

The broadcast tonight is billed as a tribute to all the Sherpas and their families affected by the recent Mt. Everest avalanche. It airs 9 EDT.

This is the program from last night: