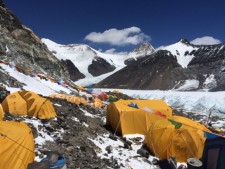 Right on schedule, s the teams on the north side of Everest are completing their acclimatization rotations and looking at potential summit dates. Thus far, the season is going very smoothly on that side.

Bill Burke, at age 72, is climbing with Asian Trekking and posting regular audio updates. In today’s dispatch he noted they had competed their rotations and were going to the Tibetan village of Tingri for a little rest. He also said they were looking at a potential summit window of May 17 -19.

Another team includes Phillipe Hullaert from, France. He notes that on his team is Ralf Dujmovits who’s trying to summit without O’s. Dujmovirs is the very well known German mountaineer and the first German to climb the 14 8000m mountains. Dujmovirs gain famed with his 2012 picture of th line of climbers up the Lhotse face and his further comments on what Everest had become. This from Outside in 2013:

Being on Everest on the Tibetan normal route, people get no feeling for what it means to be on a lonely route, on an eight thousand meter peak, on your own, without all these crowds. The climbers on Everest are trying to achieve something that doesn’t exist any longer—at least on Everest.

No, I’m not done with Nepal. It’s the wrong moment to ask me that. I lost something I really love in my life. It’s done. I’m not saying I’m never coming back, but give me time. I need to figure it out. There are many other mountains I can climb. Everest is Everest, and Everest lost a lot, but it’s still the highest mountain in the world.

It seems that Everest still has an attraction even after a bad experience for amateurs and professionals alike.

Eric Simonson, IMG reports,  posted their final update for Everest 2014 from the Nepal side:

Ang Jangbu also reports that up at Everest Base Camp, the Icefall doctors are now bringing down the ladders and ropes from the Icefall, so there will be no further climbing. For all of you Everest history buffs out there, I believe that this is the first season since 1986 that nobody climbed Mt. Everest from the Nepal Side during the spring climbing season.

One independent climber is at EBC insisting on climbing solo, without ladders to Lhotse as of May 7th.