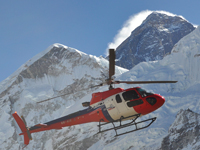 This is a season with no end from Nepal. As I reported yesterday, IMG noted the Icefall Doctors were removing the ladders from the Khumbu Icefall and, assumed, the season would finally come to an end. I noted there was one climber attempting Lhotse still there determined to climb with or without ladders.

This is just to let you know that my climb on the Everest Massif will continue with or without ladders. I have climbed some of the world’s most dangerous mountain WITHOUT them and this mountain is, actually, very tame when I compare it with the likes of Nanga Parbat, Annapurna 1 and Kangchenjunga. I refuse to give in to the pressures of the Everest mafia. I’d like to decide for myself when I have reached my limits. Thanks to ALL of you for all the positive energy; I can feel it..

And today it was reported Cleo did just that by taking a helicopter to Camp 2 in the Western Cwm. The report goes on to say:

American climber Cleonice P Weidlich, who reached Camp 2 from Gorak Shep on a chopper, has apparently done so without taking permission from the ministry of tourism and civil aviation. Ministry’s permission is mandatory to take a chopper to the restricted area above the Base Camp. International operators, including IMG, Himex, AAI, Adventure Consultants, Jagged Globe and Peak Freaks, chartered helicopters to carry Cleo’s climbing equipment and logistics up to Camp 2. Chief at the Lukla airport, Rimji Sherpa, and legal division chief at MoTCA, Ranjan Krishna Aryal, said they were not aware if any such flights were conducted. They said neither Lukla airport nor the ministry were asked for permission for such flights

My opinion is this is a misstatement regarding the commercial companies as the ones mentioned did receive permission to fly into the Western Cwm to remove gear at C1 and C2. I would be very surprised if they knowingly carried gear into the Cwm but nothing surprises any more on Everest.

The reported cost was US$2,000 per person per flight, so a person would spend $4K to get into and out of the Western Cwm. Also, it appears she is climbing alone without Sherpa support.

The second climber mentioned is Chinese Jing Wang trying to set a record for climbing the 7 Summits plus both poles. See these updates from Russell Brice on her project 7+2. She was with Himex on Everest and now appears to have reset her ambitions and will try to climb Everest with a team of seven Sherpa:

“Chang, on the other hand, has hired seven local Sherpas and is headed for the Base Camp from Namche Bazaar,” sources told THT, adding that she will leave for Camp 1 in the next five days.

There is still time for these women to climb as the monsoons don’t usually arrive until late May to early June. However, recent reports on Cho Oyu show 100 mph winds on the summit and other reports have heavy snow in the Everest region.The usuall summit window on Everest is around May 21st.

Meanwhile, teams on the North side have mostly reed to Chinese Base Camp or lower to rest up for an anticipated summit around May 20th.

I don’t know about you but I’m getting whiplash!

Report of Jing Wang plus 7 Sherpa flown to C2 in Western Cwm to attempt Everest. Wang own the huge Chinese outdoor gear company Toread. She tried unsuccessfully to get a permit to climb on the North after the Nepal side effectively shut down.

Jing Wang’s helicopter flight has put Russell Brice and his company Himalayan Experience aka Himex at huge risk per this newsletter he sent out today:

Many of you know that I have been dealing with the logistics for Jing Wang to climb the 7 summits and 2 poles in record time. Of course this project came to an abrupt end when I was forced to cancel my Everest and Lhotse trips. I suggested to Jing that she go to the North side of Everest and obtain a climbing permit from the CMA or CTMA, but this was not forthcoming. Although Jing asked if I could arrange for her trip to continue on the South side, I refused and so did all my Sherpa staff.

In the event it appears that Jing has arranged to continue to climb with another agency and has without permission flown by helicopter to Camp 2, despite me warning her not to.

This has caused me considerable problems with the Ministry, who say that I am still responsible for Jing, despite me not knowing who the other operator actually is. Well in fact I do know who this operator is, but he continues to tell me lies, saying that he has not organised the 7 Sherpa’s that are currently with Jing, although they all come from his company. Even after repeated phone calls he still does not come to the Ministry to take on the responsibility of the Sherpa’s insurance and other such matters. In the meanwhile the Ministry says that they will punish my company, quite a large fine and probably banned from coming to Nepal for 5 years. It is only in the past few hours that I have now been cleared of the responsibility for Jing and her phantom operator.

So for members who might think that I have carried on with my expedition, please know that this is the exact opposite, these actions of others has caused me considerable pain and hard work to clear my company name in the past few days.

Also, there are new reports of other people flying into the Western Cwm – no details on who they are. But the Nepal Ministry of Tourism seems to have lost control of Everest per this report on the Himalayan Times:

The CAAN has been given three days to furnish a detailed report on the flights conducted by different chopper companies in the Khumbu area from April 18 to till date, said Suresh Acharya, head of the Aviation Industry Management Division at MoTCA.

“The letter issued to CAAN has asked for all details regarding number of flights, chopper companies, status of permission, flights hours, destinations, purposes and other documents related to flights to the Everest region,” he said.

As per the law, except for emergency rescue, helicopters can be used above the Base Camp only after taking permission from CAAN.

Today’s move came after Wang Jing, 40, from China, who is attempting to scale Mt Everest, and American climber Cleonice Weidlich, 51 of Mt Lhotse Expedition flew to Camp 2 from Base Camp and Gorak Shep.

This report notes the other teams trying to bypass the Khumbu Icefall: