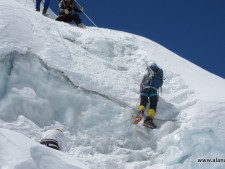 Long Expeditions are often filled with a lot of down time, sometimes by design to let your body adjust to the altitude and other times due to unforeseen events. Well we have had a bit of both thus far.

I have been gone from home for 3 weeks so I’m ready to do some climbing. A combination of poor weather and the new route through the Khumbu Icefall has put everyone on the South side about a week behind schedule. But we have about 6 weeks to go, so there is no need for great concern at this point.

Wednesday, April 22 was another perfect day at Everest Base Camp (EBC). I awoke to the sound of prayer flags in a gentle breeze, the sound of teammates quietly chatting in the dining tent, all rudely broken by the deep sound of helicopter rotors as the first of five choppers landed at the pad a short distance from our camp.

For the fourth straight day communications from EBC is limited at . EverestLink has been down due to an equipment failure, Imarasat moved their satellite so all the teams counting on them for sat comms have been thwarted. Ncell voice works if you find the right spot, the same for data connection, but it is slow. And Mercantile sat works but also slower than most. So, getting an email or a post out was dicey regardless of the system you used.

In spite of trying every trick I know, I was not able to get a dispatch out until now and even now it is painfully slow on EverestLink.

But today is nice day, a rest day for our team after our first steps in the Icefall earlier this week and a lot of training in the lower part of the Icefall. But it is time to climb!

We will move to four nights in the Western Cwm tomorrow, Thursday, April 23; two at Camp 1 and two at Camp 2. We get up at 1:00am Thursday morning, to try and beat the expected rush of teams with the same goal.

Overall Climbing Everest from the South side is business as usual with teams working together well, new climbers and old veterans alike looking at the Icefall with awe.

Let me describe our first steps in the Icefall on Monday:

The white nylon line stood out even on the white snow next to my bright yellow boots. I reached down, picked it up and attached my jumar, I turned around and as always, Kami was standing nearby. “We are back in the Icefall.” I said. “Good Luck” was his response as we started out climbing the Khumbu Icefall on our way to hopefully summit Lhotse in about four weeks.

It was another perfect day at Everest Base Camp and it seemed like every team was out taking advantage of it. It was reported that hundreds of Sherpas started in the dark hours of the morning to go to Camp 2 to check on the gear left there after the 2014 tragedy. Other teams were doing their first sorte’ into the Icefall to work on acclimatization and technique.

I was eager to get there myself to see what new route held for us. We only climbed to 18,600, about 1,100 above our base camp but I found the new route faster, and more straight forward albeit a bit steeper. We never encountered a ladder. The Icefall typically tops out around 19,300’ so we still had a ways to go when we stopped.

Other teams coming back down reported serious traffic jams near the top as it gets very steep as noted in the photos Garrett Madison posted. There is only one ladder, actually several lashed together, and it was reportedly taking one Sherpa ten minutes to climb it.

The SPCC and the Icefall Doctors put up a second ladder today, however it is reported to be six ladders lashed together at a 90 degree angle -yes vertical! The also put in a rope to be used for rappelling or abseiling down to reduce this bottle neck. I anticipate this section will create serious delays and be troublesome for some.

It felt good to be back in the Icefall, in spite of last years tragedy and the ever present danger. I find the ice sculptures inspiring, the terrain causes me to focus like I rarely do and views unparalleled. The route definitely is to the right of the previous years but not very close to Nuptse, that also has hanging seracs. So to say it is in the middle is not a bad description.

There will be a rush now to establish Camps 1 and 2 in the Western Cwm. Each morning will see 200 – 300 Sherpas ferrying tents, stoves, food and fuel. The Expedition Operators Association submitted a formal request to use helicopters to at least ferry tons of fixed ropes and anchors to reduce Sherpas loads but thus far the Ministry has been silent on the request. This would reduce the Sherpa loads through the Icefall by 80.

I will do a complete update when I get back to EBC on Monday.

It finally feels like the Everest season has begun. 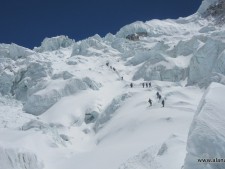 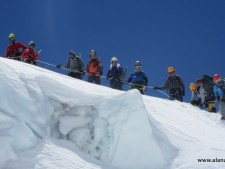 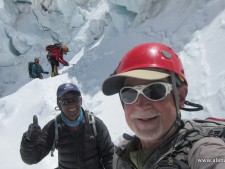 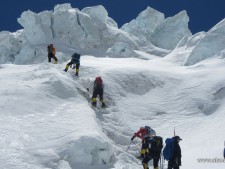 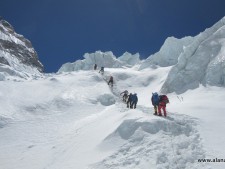 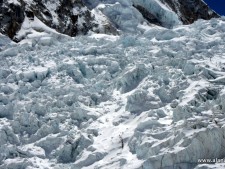 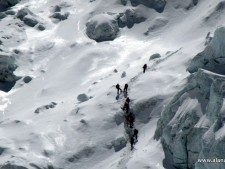 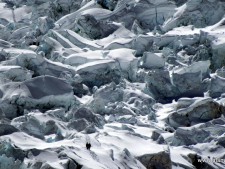 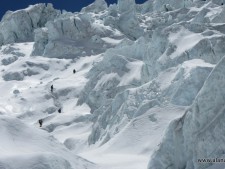 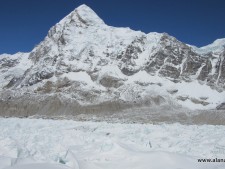 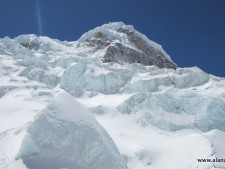 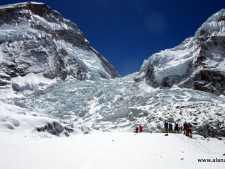