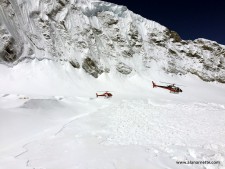 The scope of the Nepal earthquake tragedy is a huge human disaster yet the climbing community is consumed with Icefall Doctors and helicopter rescues on Everest.

I believe it is good to question and understand major life events yet I am sometimes dismayed how the climbing industry seems to literally consume itself with criticism that lacks information, prescription indictments without evidence and a vision that is sometimes based on past achievements that, while admirable, is exclusive and unwelcoming to the next generation. All this seems to be occasionally fueled by organizations, media and personalities that make a living off the sport itself.

I guess I fueled it for my readers with my one recap comment (see full post) about the Icefall Doctors so let me try to give my perspective as someone who was there, involved and rescued. Obviously, I have no corner on the truth, only on what I saw with my own eyes and felt in my heart thus I submit this for your consideration and information only.

When the earthquake and associated aftershocks occurred, I know our team understood it would take days, if not longer to repair the route in  he Khumbu Icefall in order for us to down climb to EBC – there was little thought of helicopter rescue at the onset.

World class professional mountain guides including Damien Benegas, Jeff Justman and Justin Merle spent the day after the initial quake searching for a new route down, starting from Camp 1. Others, sorry don’t know their names, did the same climbing up from EBC. They worked up to the point when the third aftershock and the warming of the day made the Icefall more unstable thus putting their lives at risk and they failed to find a suitable new route. I personally listened to the radio conversations.

The Icefall Docs who knew the route because they had studied photographs and spent the previous five weeks putting it in and maintaining it were not part of this initial team.

They had reed to Gorak Shep as their camp had been destroyed by the blast. To my knowledge they didn’t ask other camps to host them similar to what other teams did in order to stay and support their climbers still on the mountain. This was similar to 2014 when violence at EBC sent the Docs to Gorak Shep thus effectively closing the Icefall for the season.

All Everest/Lhotse/Nuptse expeditions are required to allow the icefall route to be installed and maintained by the SPCC and have little to no choice as to where, when and how the route is maintained.

To be clear, I and I assume most everyone, fully understood their top priority was the safety of their families. I personally gave my sat phone to Sherpas for them to call home but the cell service through this part of Nepal was down for days thus families were unreachable. It was a two to five day walk for them to get to their villages and some left EBC immediately with the full support of team members and expedition leaders.

The “disappointment” with the Docs comes from the simple fact that they had the knowledge, skills and access to evaluate the route for repair, and sustainability after the quake, yet they left.

If you are still reading this, here is the analogy. You want to build a home with a sprinkler system to protect it from fire yet the city tells you don’t do it because there is a fire station next door, and you pay for it with your taxes – you don’t have a choice. One day, your home is on fire you call for help and are told they won’t come because the weather is bad.

You had a contract, counted on it with people who agreed to it and when you needed it the most, it wasn’t available.

I appreciate what the Docs do for climbers, their job is hard, physical and dangerous. And it is not always easy.

The other area of controversy is why were helicopters used to rescue climbers in the Western Cwm and not used to rescue Nepalis in the impacted parts of Nepal. Fair question. Again, I was there and these are my observations.

Like it or not, choppers have become part of the climbing fabric, especially on Everest. They are routinely used to carry people to base camps, resupply expeditions and perform medical rescues. This is not up for debate as it is the reality and will probably never change.

On the day before the quake multiple choppers were working Everest plus taking ill trekkers out from Gorak Shep and below. The day of the quake the weather had closed in and visibility, at least in the Western Cwm was virtually zero. Some of the choppers had been grounded in Lukla, normal so they can quickly access the upper Khumbu.

Let me pause to say the obvious, the helicopter services run a business and a lot of it is funded by insurance paid for by the climbers and trekkers. It should be no surprise they go where the money is … Ten years ago, helicopter rescues were run by the Nepal Military, similar to Pakistan today. It was cumbersome, slow to respond and ineffective at times. Also the financial investment to high altitude helicopters like the modern Aérospatiale B3 helicopter at ~ US 3 million each is a far reach for a poor country like Nepal.

The private services have saved many lives since taking it over. Think back to the amazing 1996 rescue performed by Nepal pilot and army captain, KC Madan with his rescue of Beck Weathers and Makalu Gau via a stripped down helicopter, a B-2 Squirrel A-Star Ecuriel helicopter, that barely flew in the thin air of the Western Cwm. This is routine today and saves many lives – foreign and Sherpas alike each season on Everest and other Nepal mountains.

OK, back to the rescues. As the aftershocks made the Icefall impassable (see previous discussion), teams were forced to either wait for something to change, e.g. the route to get fixed before they ran out of food and fuel plus risk injury, illness or death from avalanches off Nuptse and Everest’s West Shoulder onto Camps 1 and 2; or call for helicopter evacuation while the weather was suitable.

Please remember that all of this was occurring after a 7.8 magnitude earthquake, one the largest in almost a century in this area. Aftershocks were common and in fact China subsequently closed Everest on their side to hopefully avoid similar death that had occurred in Nepal. Also to suggest there was clear command and control throughout Nepal at this point is interesting theory.

With the helicopters already near Everest – Lukla or closer – the helicopter companies made the decision to focus resources for one morning to evacuate 170 people from Camp 1. Yes, I do believe and understand there were calls for other organizations to use the helicopters in other parts of Nepal to also rescue people and save lives.

So the decision came down to: do you use resources that can have an immediate impact – save 170 lives in a four hour period, or risk coming back later  – timeframe undetermined – or count on the ability of those 170 to save themselves with dwindling provisions, unstable mountain terrain and variable weather.

When I say no teams was “stranded and starving”, that was true, however most teams had brought provisions for only a few nights during this first acclimatization rotation, nothing sufficient to last for more than four or six days.

As the helicopters came to Camp 1, they operated with precision and skill. The choppers had been stripped of all seats, cargo and had limited fuel to save weight in order to fly at 21,000 feet with two passengers. They landed for 30 seconds or less while two people jumped on board with their backpacks. The helicopter flew directly to EBC, unloaded and returned. I am estimating they spent less than four hours in this operation.

I estimate over half of the rescued from the Cwm were Sherpas. Once completed, all helicopters were sent to other parts of Nepal while one stayed to service the Khumbu including injured Sherpas, climbers and local residents.

Of note, there were 120 injured and 19 dead at EBC, the vast majority were Nepali cooks, staff and Sherpas as they were at EBC during the quake. Lost in the discussion is that these injured Nepali at EBC were just like those other Nepalis hundreds of miles away.

Finally as to the point that the climbers rescued out of the Cwm should of had the skills to down climb the Khumbu Icefall in any condition, I invite anyone with that perspective to view this video I took as we flew out from C1. Pause between 20 and 30 seconds in the clip and view the width and depth of the crevasses. I leave it to you to select the climbers you judge capable of overcoming these obstacles with the ever-present risk of magnitude 5+ aftershocks much less in a stable environment.

Let me finish by expressing my gratitude to the pilots, helicopter companies (Simrik and Fishtail), insurance combines (Global Rescue), and guide companies. No climber ever expects to be in this position. When I was planning Lhotse, the word “earthquake” never entered my mind.

Again, my deep condolences to everyone in Nepal and elsewhere with families impacted by this natural disaster.

Memories are Everything
Alan

52 Responses to “Everest 2015: Icefall Doctors and Helicopter Rescues – Justified or a Crutch?”