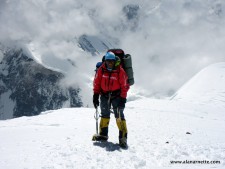 The poor conditions across Northern Pakistan have effectively stopped all climbs and almost cost my friend, capsule Kami Sherpa, his life.

Kami (Ang Chhiring Sherpa – Pangboche) Sherpa was injured when he was hit by a large rock just below Camp 1. His left shoulder was dislocated and arm and hand broken. He was flown out on July 25 to Skardu to undergo surgery, according to an email I received from Garrett Madison.

A fundraiser has been started to help Kami and his family. Kami also lost his home from the April 2015 earthquake on Nepal.

This incident, plus the thwarted summit attempt by Mike Horn’s strong team and a tremendous slab avalanche off K2 that buried Advanced Base Camp and a large amount of the climbing gear for Seven Summits Treks has led Russell Brice (Himalayan Experience aka Himex) and Garrett Madison to cancel their K2 expeditions.

During the last few days the weather and route conditions have deteriorated significantly on K2, causing many avalanches and also rock fall. The climate here has warmed up dramatically, and as a result snow slides down to the glacial ice have peeled off K2 and the surrounding peaks, in once case the snow avalanches buried another team’s advanced base camp, fortunately no one was there at the time. The weather forecast has much snow ahead as well as continued warm temperatures, so without any indication that conditions may improve we are abandoning our climb of K2.

David Tait has now left K2 Base Camp but made this observation on his last post:

Mike Horn declare bluntly that despite this being his 4th attempt and having spent 18 months of his life at K2 BC trying to succeed, he was adamant that K2 could not be climbed this year. Coming from just anyone, this revelation could have been taken with a pinch of salt – but coming from such a strong group of climbers [the likes of which I have never previously seen] it struck home like a missile. No one in the Himex team could hold a candle to their strength in sugar snow and one could sense this fact pass through all minds.

Both teams are considering Broad Peak but the large number of climbers who attempted it yesterday turned around at 7000 meters, just beyond Camp 3 due to very loose “sugary” snow as reported by Al Hancock and Tunic Fudik. A Spanish team did climb to the saddle where the summit ridge begins but reported it took them more than 10 hours whereas it usually requires less than 5. They deemed the summit ridge too dangerous to climb in the power snow conditions.

But it appears some teams will make another effort on Broad. Billi Bierling tweeted about Broad Peak:

Will leave for C2 early on Sunday, then C3 and then we’ll take it from there. Maybe we’ll have a chance.

It’s unclear to me about the Broad Peak attempt with the forecast of incoming weather, perhaps it changed.

Finally, there is one report of Polish ski champion Andrzej Bargiel summiting Broad Peak from Camp 3 in just 8 hours yesterday. It is said he skied off the summit, a first. Apparently the rest of his team turned back and he summited alone, an impressive feat. Bargiel is a speed climber, setting records on Manaslu and Elbrus. 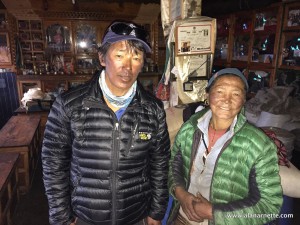 Kami and his wife in the home before the earthquake

Please consider a donation to help Kami. He not only lost his home but now perhaps his livelihood of climbing due to this injury.