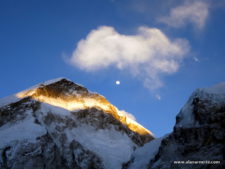 For the first time since May 24, 2013, climbers officially summited Everest from Nepal. First this year was the rope fixing team of nine Sherpas then on their heels were two Sherpas and two UK climbers. A slew of other teams are on stand-by but the weather is closing the window quickly so it will be a race to see if anyone else summits in the next few days.

A team of nine Sherpas from multiple teams completed the rope fixing to the summit from the South Col on Wednesday, May 11, 2016. These were the first summits since Jing Wang claimed a summit on May 23, 2014 – which is disputed by many not only for her using a helicopter to bypass the Khumbu Icefall but some even claim she did not summit at all given the absence of proof. The previous summit was on May 24, 2013 by Lhapka Nuru Sherpa (Thami) at 6:00 am.

On the heels of the Sherpas who broke the trail to the summit, Sherpas from HG Everest Expedition 2016 – Pemba Bhote from Hatiya, Sankhuwasabha and Dorchi Gyalzen, Khumjung, Solukhumbu summited along with Kenton Cool and Robert Lucas bringing the total to 13 in 2016 from the Nepal Side. This was Cool’s 12th summit of Everest.

A few hours later, Asian Trekking announced that David Liano Gonzalez from Mexico summited Everest today at 8:24 am along with his climbing sherpa Pasang Rita Sherpa. He did not use Oxygen. This was Liano 6th summit of Everest.

Multiple teams are staged from Camp 2 to the South Col waiting for a good weather forecast. They include: Madison Mountaineering. Jagged Globe, Himalayan Experience and others. Heavy snow is predicting for the next couple of days followed by high winds, but there there may be an 18 hour window of opportunity. This is narrow and risky.

Many teams are content to wait for another week.

The Icefall continues to be very unstable as I personally  saw when I was there. There have been two events that have stopped climbing due to ladders being destroyed by falling ice in the past 24 hours. There were no injuries reported.