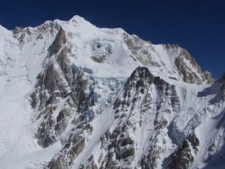 Manaslu wound down this week with a few more summits, a first summit was accomplished in Nepal and a missed summit was corrected in Pakistan.

Bill Burke, the oldest American to summit Everest and live, finally saw his namesake peak summited. He attempted the peak three previous times: 2015, 2016 and this past spring of 2017. This time on his fourth expedition, Bill pulled in professional mountain guide, Noel Hanna. While Bill did not summit, Noel and three Sherpas:  Sirdar Naga Dorje Sherpa, Pemba Tshering Sherpa and Samden Bhote, all did on 5th October, 2017 at 12:05pm. 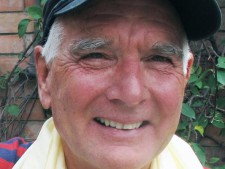 Bill, at age 75, apparently made it to Camp 1 and chose not go higher. I’m sure he will fill us in through his blog when gets home.

Noel was a lead guide for the Seven Summits Club and has summitted Mt. Everest eight times, twice with his wife, Lynne. He has  completed the 7 Summits with a twist that has never been repeated: after each summit, he returned to sea level by his own power: bicycle, walking and skis. Noel is an ultra athlete. He has competed in dozens of the world’s most extreme adventure races, with podium finishes and accomplishments that put him in the Guinness Book of World Records.

A film crew was along to document this summit. We should expect the film in 2018.

Congratulations to Bill and his team.

Sherpa guide, Mingma Gyalje Sherpa  missed the summit on his first attempt on Nanga Parbat saying he believes he mistakenly stood on a sub summit by his own admission earlier this year. He also is assumed to have missed the summit on Broad Peak but has not made a public statement. However, the 31 year-old appears to have successfully summited in 2017: Dhaulagiri on 30 April, Makalu on 14 May, and K2 on 29 July.

We are sorry for no updates as our friends suggested us not to give any information about this climb. By this climb, I understood that Pakistan’s tourism agencies need to focus on Autumn climbing and trekking around Nanga Parbat area as the weather remains very fine and clear all the days.

Congratulations to all climbers on Manaslu for successful ascent and other climbers who made safe descent from Dhaulagiri and Makalu. Ps: photo and videos will be shared once we are back in city.

Congratulations on an excellent year for Mingma.

A busy season wrapped up with Seven Summits Club out of Russia putting all their team on the summit -17 people as well as Adventure Consultants waiting out some high winds in order to summit 10.

This year was especially crowded on Manaslu as the Chinese had closed Tibet for autumn climbing due to sensitive political meetings being held in the area. No reports of large issues with the crowds as they enjoyed an unprecedented two weeks of good weather compared to the more usual period of a few days.

These teams are reporting summits and I estimate around 250 when the final numbers are tabulated once the Himalayan Database and the Nepal Ministry of Tourism contact all the teams.

Congratulations to all who summited.

South Korean, Sung-Taek Hong, 51, along with Spanish climber Jorge Egocheaga, 49, are attempting Lhotse’s South Face.  They established their base camp and are now climbing.

This is always a question as we approach winter. And teams usually keep their plans quiet. The recent suspects include Alex Txikon on Everest and the Poles on K2. Stay tuned!

The Rest of the World

The climbing activity now moves to the 6,000 and 7,000 meter peaks of Nepal including Ama Dablam and Cholatse plus in South America including Aconcagua. Of course it won’t be long until the big airplane begin to fly climbers to Antartica for Mt. Vinson.