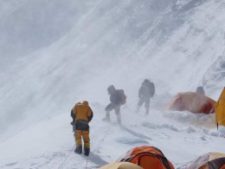 Will there be a winter summit of Everest and finally on K2 this winter? This is always a question as we approach winter. And teams usually keep their plans quiet. The recent suspects include Alex Txikon on Everest and the Poles on K2.

To claim a true winter ascent of a northern hemisphere peak, the summit must be reached during the calendar winter of the northern hemisphere. For 2017/18 this begins with the winter solstice on December 21, 2017 at 11:28 am EST and ends with the spring equinox on March 201, 2018 at 12:15 pm EDT.

As this table shows, Polish climbers have dominated first winter ascents of the 8000 meter peaks.

Alex posted on after his amazing effort last year saying he will be back for another winter Everest attempt. He declined to join another team this winter citing his Everest desire but, to my knowledge, has made no public commitment about this year.

This isn’t a goodbye, it’s a “see you later”. Everest hasn’t wanted this year to conquire its heart, but what I do appreciate clearly is that it has stolen my heart. I dream, every day, since we left our home on December 25 that we reach the 8848 meters that separate us from the sky, but greed is useless in the mountain. You never have to go against nature; this is something that has been engraved during my entire career in which I have lived very difficult moments: if you don’t want the mountain defeating you, don’t end with it; respect and care of it.

Therefore, although I feel very strong physically and psychologically, the winter hasn’t given a truce, the strong wind tossed us to the ground and the forecast of the next few days is terrifying. However, there is no doubt that it has been the most special expedition of my life, in which I have been surprised by myself, and in which we have achieved the world of mountaineering to have a continous follow up that excites me. In addition, without a doubt, all of you are the icing on the cake, that I have felt you every minute as if you were my family, supporting me in every achievement and every complicated moment. I promise you that I will return to the mountain that has stolen my heart in the purest way. I love you, guys.

Of course, K2 remains the only 8000er not summited in winter. Last year, Nanga Parbat succumbed to the team of Alex Txikon, Ali Sadpara, Simone Moro, and Tamara Lunger. It took 31 winter attempts before summiting Nanga in winter.

Now on K2, Krzysztof Wielicki, 67, who was in the first team to scale Everest in winter in 1980 will lead the Polish K2 attempt this winter.

Funding had been a problem but it appears they have received $275,000 from the Polish Ministry of Sport and Tourism according to this article.

They will be a team of 10 but only four will be on the “summit team.” They will climb in traditional siege style establishing several camps along the route. Of course weather is the primary concern as K2 is always hit with high winds but in winter the jet stream tends to sit on top of it with 200 mph winds and experience heavy snowfall.

The team is scheduled to include: Janusz Goląb, 50, with a Gasherbum I ascent, Artur Małek, who made the first winter ascent of Broad Peak, Marcin Kaczkan, K2 in the winter of 2002/03 to 7,600m and summited K2 and Nanga Parbat in the summer, plus Marek Chmielarski, summits of Gasherbrum II and Broad Peak.

They are not sure which route they will take but it most likely will be either the Abruzzi or the Česen.

See this post for a nice overview of K2 winter attempts. But these are the highlights from Gripped:

4 Responses to “Everest and K2 in the Winter”