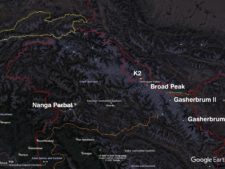 July 21st 2018 was a good day for K2 climbers. 31 people summited – all from the Nepali company Seven Summits Treks (SST). With 100% success, they had 13 Sherpas, 2 Pakistani High Altitude Porters and 7 clients on the top. The members were from Mongolia, China, Japan, Belgium, Switzerland, Mexico and Ireland. Also three clients and two Sherpas from Summit Climb and two Sherpas from Madison Mountaineering, who were helping with the rope fixing, completed the total of 31. See this post from SST for the names of their summiteers.

Of note there were five women climbers who summited including Gangaamaa Badamgarav who became the first Mongolian to summit K2 as well as the first female from her country. Also Chinese Jianhong Li,  Japanese Naoko Watanabe, Mexican Viridiana Chavez and Swiss climber Sophie Lavaud.

With so much traffic on the upper mountain the boot path, and fixed ropes, are well established. Assuming no new snow, the next teams will have a well marked trail to follow. Andrzej Bargiel reports in at Camp 4 and is expected to summit Sunday morning and descend by skis. The Madison Mountaineering left Camp 4 at 9:00 am Saturday, 21st July looking to summit in about 12 hours or early Sunday morning. You can follow one of their member, Lisa Thompson on her tracker.

Fredrik Sträng and David Roeske have left K2 BC for their summit push. They hope to get there by Tuesday, 24th July. They are climbing without Os.

Congratulations to all and a safe journey to the rest.

As always, I use my blog to raise awareness of Alzheimer’s and if you appreciate my coverage, please consider a donation where 100% goes to Alzheimer’s non-profits and nothing ever to me. Read more about why this cause is so important at this link and how Alzheimer’s took Ida Arnette’s life.