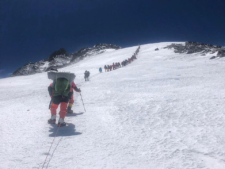 The rope team made the summit on the Tibet side and I’m being told there are no winds at Camp 3 as climbers are leaving for the summit on Wednesday night, May 22.  Meanwhile over 200 people summited from Nepal on Wednesday morning. There were long waits reported from the Balcony to the South Summit.

On the Tibet side, Adrian Ballinger proudly told me late This Wednesday night that their member who left the US only 12 days ago summited just behind the Chinese rope team:

Alpenglow Lightning Ascent summited to day with rope fixers!!!!! 10 days in country an 12 days since leaving USA. Lydia and Roxanne along with Pasang and Mingma summited with rope fixers in light to moderate winds and warm temps. They are back down to c2 and continuing to abc tonight, Shegar tomorrow and USA on 24th. It worked! 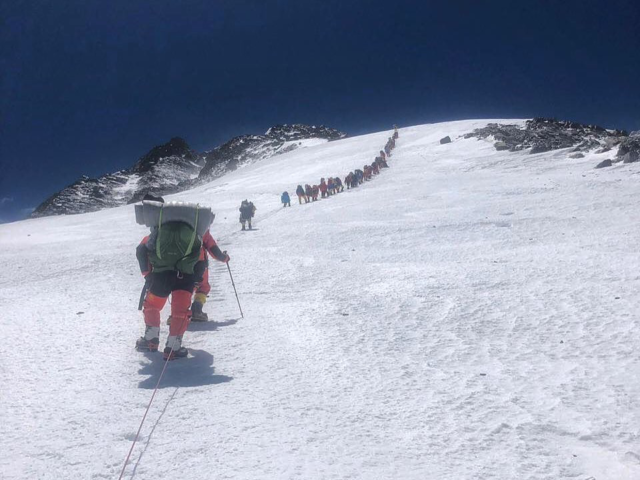 Mirza Ali summited today making him the first Pakistani male climber to complete the Seven Summits. And Fatima Deryan and Ralph Kisso of Lebanon also summited. I note these because Everest summits by climbed from the Middle East has been rare, especially female climbers.

Apparently, there was a crowd following the Chinese rope fixers through early Wednesday night. Summits are being reported by:

Adrian Ballinger, told me his late Wednesday night that they will wait a day to let the crowds thin out and “I’ll take wind over crowds”

Teams that were expected to summit Wednesday included

Wave 5 Last Day of this Window

Those were who were planning a push for a Thursday, May 23 summit include:

These climbers/teams are using GPS tracking devices so you can follow along: