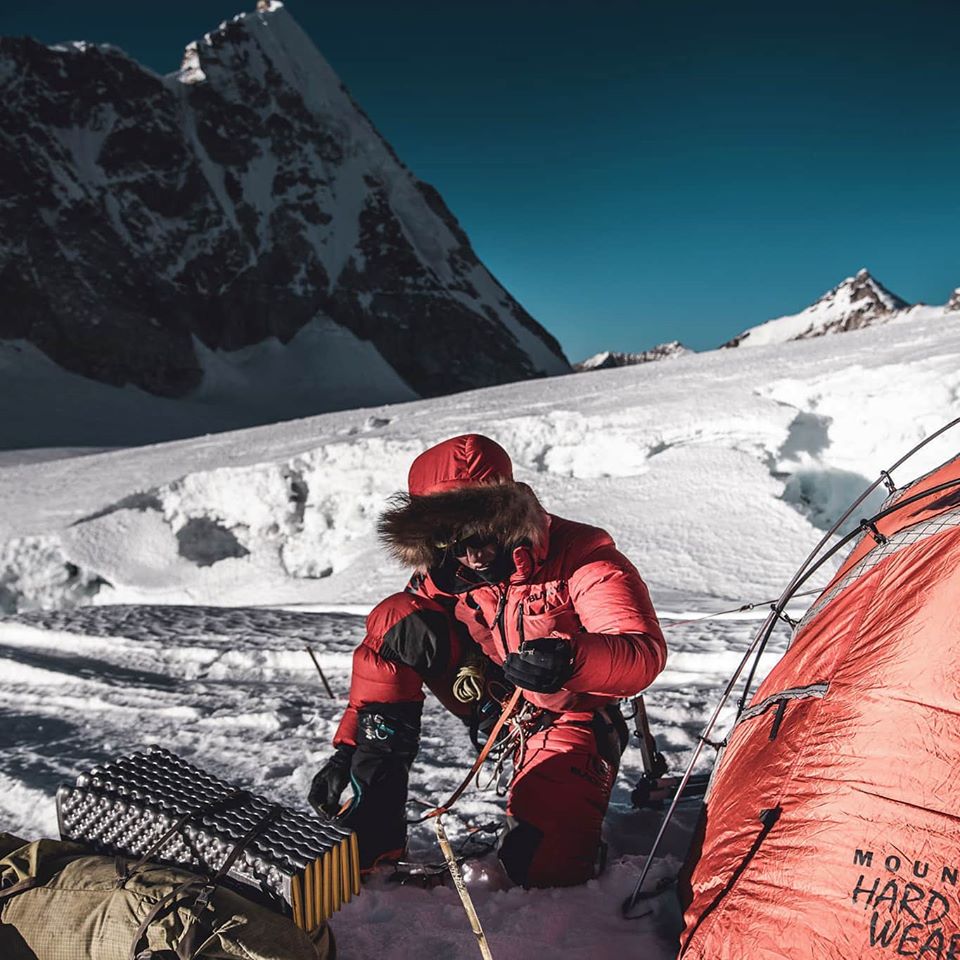 Denis Urbuko ended his winter Broad Peak effort after reaching 7000m, getting hit by an avalanche. Spaniard Oscar Cardo on Alex Txikon’s team evacuated from Everest C2 with some form of AMS. Controversy over the early termination of the K2 expedition.

Broad Peak – Over – Hit by Avalanche

I am in BC, no summit but survived despite some incidents Wind was 70-80 km at the top. An avalanche slide me for 100 m, then I fall down with a broken fixed rope for 50 m. not into a crevase fortunately. I fought despite everything. Is enough!

He was attempting to summit in what he views as true winter, before the end of February. He was alone after his teammates Don Bowie and Lotta Hintsa left due to Bowie’s illness.

Jost on West Ridge – Exploring Alternatives. Over by Feb 29.

German alpinist Jost Kobusch, has told reporters he will end his effort by February 29. He continues to explore an alternative route to gain the West Ridge proper. In review, he plans on a winter, solo Everest climb without supplemental oxygen and no Sherpa support. This exact style has never been attempted or accomplished. You can track his location on this excellent map from 3D Reality Maps.

After 17.23 hours I arrived back in my tent in camp one ere yesterday morning – exploring a route option in the west shoulder. The result: yes, it is possible, but sexy is something else … There was a lot of hard blue ice, in a terrain where every mistake is fatal. There must be a better option – but to see Everest from up there is very moving and motivating! This massive stone pyramid – it almost didn’t look like from this world! My fat burning works 1a top class! I only drank out of my Camelbag during the whole load and didn’t eat anything for 14 hours and was able to perform on the mountain, However yesterday morning while I melted some snow, I had a microsleep … I managed to fill the water into a bottle before the lights went out – apropos lights: my headlamp died ere yesterday, although fully charged. Then I went down with cell phone light. Alpinism is improvisation

With an improved forecast Alex Txikon and team are back up to the mid camp, C2, fighting high winds. Txikon’s posted this update on Facebook and Twitter around 7 pm Monday night February 17, 2020:

Today we’re staying put in C2, battling the wind, but we’ve got food for days and a solar pannel. We’ll go for the Lhotse Wall tomorrow. Should we reach the Yellow Bands (7600m), we would be ready for a summit push in the following days. There’s only 4 of us but we’re strong and determined.

His home team issued a statement from Alex about the evacuation of teammate Spaniard Oscar Cardo. Now only Alex and three Sherpas remain.

The mountain will have the last word

If I am not wrong, today is Sunday, Feb16. We’ve been working really hard for the last three days. On Feb14 we set off and fixed again the route through the Khumbu Icefall, in a 9 hour-long, tough but rewarding working day. Back in BC, we only had a few hours of rest before leaving again at 2.15am on Feb15. Pechhumbe, Geljen Lama, Nurbu, Oscar and I departed towards camp 2 in a beautiful, starred night. We managed a brisk pace despite feeling rather sleepy, slightly nervous and definitely overloaded with gear in our backpacks. The waning moon cast a magical light upon the Khumbu valley; I couldn’t stop taking pictures everywhere, feeling privileged to be there.Here is the recount of that day and night:

At passing by Camp 1 we take some more supplies to carry up. Oscar marches full-throttle, smiling and powerful: he’s a very strong guy. However, barely 1 km before reaching Camp 2, his pace changes radically. He stops coordinating, starts feeling bad, in pain… I realize he is surely suffering from AMS, possibly HACE. We must make decisions: you’re always telling yourself to be tough and brave, to go down by your own means no matter how bad you feel. But the fact is, tackling the Icefall in his state could be lethal. I check with Sergio and Diego in BC and share thoughts: I cannot imagine Oscar rappelling down among seracs and crevasses right then. We place our bets on waiting and calling for a chopper rescue on the following morning, trusting Oscar will be strong enough as to endure the night. The other option is getting him in a hazardous terrain, risking an open-air bivouac in the dead of winter. It’s too risky. So, we wait. And we are so worried. I start repeating myself: “please, oh please, let it by just a scare, please, just a bloody scare…”

I am carrying my backpack and his… Then I remember that song called “espadrille’s soles” (about those fleeing Spain through the mountains after the Civil War)… Sure, the situation is totally different, those times were really had and surrendering meant death – and , after all, we’re here because we want to… But it helps anyway, to keep me motivated and struggling to get to the tents. Once finally there, I call Dr. Antonio Cid in Spain, a friend of Oscar’s, who reports detailed instructions for me to treat Oscar. Luckily, at a certain moment his strong body starts reacting. Oscar is a professional firefighter, and that counts! He’s performed great through all the stages of the expedition, giving it all, but these things happen and, when they happen at altitude, they’re always serious. At times, Oscar forgets what’s going on with him, he is confused. I barely sleep, I just watch him and get increasingly worried… It’s psychologically very hard, but somehow we stand it until, at 7.40am, the chopper appears at Camp 2 and, in a blink of an eye, takes Oscar away, like in a Hollywood movie.

I know Oscar will return to life in minutes, as they go down. Shortly afterwards the team reports on the radio that Oscar is safe at hospital in Kathmandu. We start breathing again.

Without giving it a second though, Pechhumbe, Nurbu, Tenzen Lama and I gear up and set off again, upwards. It’s not yet windy, but bitter cold. Up the valley, we get engulfed by Lhotse’s shadow, until we get to the bergschrund.With numb fingers, lack of sleep and dehydrated, we start fixing the route to Camp 3, but stones keep falling on our heads from the barren west face of Lhotse. We resist, try different places, but in the end, we decide we cannot go on under such risky conditions. Above us, at 8,000m, the wind is blowing harder and harder. We return to Camp 2.

We are doing fine here, given the circumstances, so here we will endure. As we did yesterday and as we will do tomorrow, with efficiency and a cold head. Honestly, strategy is essential and we’re pretty good at it., although, in the end, the mountain and not us will have the final Word.

His team now includes Nepalese Sherpas Chhiji Nurbu Sherpa, Pechhumbe Sherpa, and Tenjen Sherpa. You can follow him on his tracker.

Tomaz Rotar, the Slovenian member of Mingma Gyalje Sherpaa’s Winter K2 Imagine Nepal team is accusing Mingma of running a scam operation in an interview at www.delo.si. Rotar says he was charged €40,000 and Mingma never intended to the summit. He says the entire expedition was a public relations move to enhance Mingma’s reputation. I posted Mingma’s view of the failed expedition last week in this post.