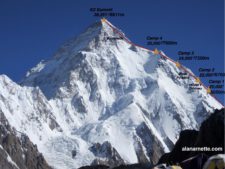 K2, the only 8000er not summited in Winter, will be busy this 2020/21 season. As of this post, there will be several teams, the most ever for the world’s second-highest peak in the winter.

There is an international, traditional commercial team by Kathmandu based Seven Summits Treks, Corrected: Alex is going in 2021/22.

Seven Summits Treks posted a list of members nearing 45 as I described in this post. The team now includes Polish climber Waldemar Kowalewski, who will do a no O’s attempt. Italy’s Tamara Lunger who was first mentioned on the SST list has now been removed from the list. Apparently, she never agreed. Also, there is a rumor that Nimss Purja who made a name for himself by summiting all fourteen of the 8000ers in six months and six days,  will do a no O’s summit and paraglide off the summit.

Overall this suggests close to 60 climbers this winter, similar to a normal summer season. There are also plans on nearby Broad Peak. Russian-American Alex Goldfarb and Hungarian Zoltan Szlanko are planning a climb, hoping to ski from the summit. 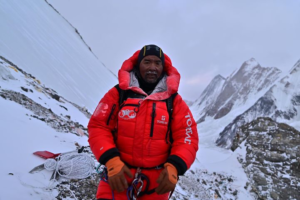 One stand out team will be lead by Mingma Gyalje Sherpa‘s founder and owner of Imagine Nepal. This will be an all Sherpa team with no clients. Mingma can manage his own finances but given the COVID-19 limitations this year and no income for almost all the Sherpas, his teammates need financial help and have set up a GoFundMe site for donations to offset expenses.

I’ve covered Mingma’s accomplishments in the past so he is no stranger to my regular readers.

He is IFMGA/UIAGM certified Mountain Guide who began his mountaineering career in 2006 with his first attempt on Mt. Manaslu.  As of today, he has successfully topped Mt Everest, K2,Kanchenjunga, Lhotse, Makalu, Cho Oyu, Dhaulagiri, Manaslu, Nanga Parbat, Annapurna, Gasherbrum I –I, Broad Peak and Gasherbrum-II. Sishapangma is the only 8000er he has not summited. He also reached the altitude of 8300m on Mt. Lhotse via South Face, which is regarded as the longest rocky range and hardest mountain to climb.

I will be exclusively covering his expedition this winter season on this set and caught up with Minga for a short Q&A:

Q: What draws you to attempt K2 in the winter, Mingma?

K2 is the last 8000er that hasn’t been climbed in winter. For all the other 8000ers summited in winter, no Shepra was with them, so this is an opportunity for Sherpa to demonstrate their strength. Besides alpinists, all the climbers take help from Sherpa to fulfill their dreams of 8000m peaks. I have helped several foreign climbers to get to the summit of different 8000ers. I was a little surprised to see no Sherpa on winter first ascent. So this climb is for all the Sherpa community who are so known because of our friends and clients from different foreign countries.

Q: When will you arrive in Pakistan?

We are planning to be there before mid December 2020.

Q: How do you define winter and what is the last possible summit day that you still consider winter?

What we have learned is 01 December to 28 or 29 February is considered winter. We very less follow astronomical calendars as the season starts changing from the beginning of March. So we will begin from mid of December and will end by February 28 at base camp.

Q: Why an all Sherpa team and no clients?

It is very clear, we want to make a summit and only the Sherpa team would be best for the mission. When there are clients, there are too many responsibilities and challenges.

Q: There are other teams attempting K2 this winter. Will you cooperate with them?

As per my knowledge, there are 4 different teams trying K2 this year including us. On the mountain, we must cooperate.

Q: What route will you use?

We are planning to use Abruzzi as winter climb is more on bare rocky sections there are chances of frequent rock following on the Cesen route and I have seen Abruzzi route winter.

Q: Will you fix your own ropes or work with other teams to get the route in?

We will fix our own and if all the team agrees to cooperate with us or with everyone then there will be combined work.

Q: You have a GoFundMe to offset the costs. Why?

As you know SHERPA gets a chance to earn only when there are climbers on the mountain. Our main earning is in the Spring season(April-May) Autumn Season (September-November). Most of the months, Sherpa are jobless and they depend on the money they earn in these seasons. This is not applicable for all Sherpa but most. They are Sherpa who goes to foreign countries for guiding and they have good earning.  In 2020, we have earned not even a penny because of Covid-19. There are few tourists climbing in Nepal at the end of the year but only a few have got job opportunities. I can make expenses on my own but all our team members can’t make all the expenses so it is necessary to go on GoFundme and ask for help from the foreign climbing friends who have climbed with Sherpa and all who have known Sherpa.

Q: Please introduce your team to us.

Best of luck MIngma, and to all the other teams. I have a feeling this may be the winter K2 joins the list.
Please visit Mingma’s GoFundme site for more details.
Climb On!
Alan
Memories are Everything