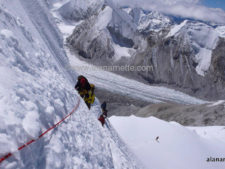 38 years after the first winter reconnaissance, climbers on K2 are preparing to push towards the summit with a credible chance of making history.  Saturday, January 16, 2021 looks to be a good summit day as we been discussing all week. A Nepal Sherpa was hit by rockfall suffering serious injuries.

A new winter altitude record, 7800-meters, has been set by @mingma.g with @mingma_david_sherpa , @mt.sherpa, and Sona Sherpa (SST.) Nims will lead the summit team and they suggest there will be no one person claiming the summit but rather a team summit on behalf of Nepal.

This has been Mingma G.’s plan all along with his Sherpa team plus Nims had one client who was more interested in Base Camp than the summit. Both gentlemen have expressed a deep desire to show the world that Nepalis are just as credible climbers as any other nationality on the planet.

Karrar Haidri, Secretary, Alpine Club Of Pakistan, along with Dawa Sherpa of SST gave me this update: 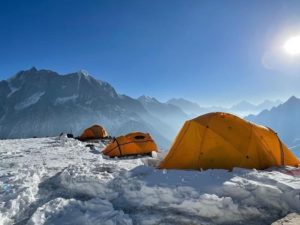 I’ll provide updates on a new post throughout the push as I get new information. 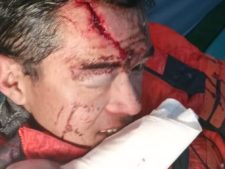 Jangbu Sherpa with SST was hit by rock between Camp 1 and the Japanese Camp, relatively low on K2. He was hit in the head and eye suffering serious injury but is now in stable condition. He will be helicoptered back to Skardu for treatment. This is the fourth evacuation this season: two members and two Sherpas.

The computer forecasts have the winds now a bit higher for Saturday at 10 to 15 mph and wind chills “only” -40F!!! Big winds return next week, so the time may be right for the ten people at Camp 4.

The traditional Camp locations are:

Nim’s – At C4 with Mingma G: Ready for the Summit

Nims’s plus four teammates are at C4:

The combined effort from the teams made some remarkable progress this afternoon. As per the mega plan, big well done to our team lead by @mingma.g with @mingma_david_sherpa , @mt.sherpaand Sona Sherpa (SST) for successfully fixing lines up to Camp 4 at 7800m, The Highest Altitude Ever Gained at K2 in Winter ! Later today, I will be leading the fixing team to the summit. We hope to stand on the summit together. Stay tuned for more updates !

Mingma G – At C4 with Nims: Ready for Summit

Mingma Gyalje Sherpa and his two teammates are also at Camp 4.

Today 15 jan at 3:30pm we 3 mingma made it to camp4 on k2. Sona brother returned back 30 below from c4 coz his part of rope and gear were already used. We see the final route now.

Remember that Migma G is climbing without supplemental oxygen. He could be the first to summit K2 in the winter with no Os.

John Snorri Sigurjonsson with Muhammad Ali Sadpara and his son Sajid Ali are at Camp 2. John posted this update:

We have touched C3 and left our gear there. Back to C2 to have some biscuits with caviar spread that I brought from Iceland. At this moment we have acclimatized well.

I suspect they will return to BC and wait for the next summit window if one appears. You can follow on their tracker.

Seven Summits Trek’s commercial team of 22 clients and 21 Sherpas in support has climbers from Base Camp to Camp 3 with their rope team at Camp 4. Dawa gave this update:

Sherpas finally fixed Camp IV 7800m this afternoon in K2, along with Nims and Mingma G.
[HIGHEST ALTITUDE EVER GAINED IN K2 IN WINTER]]

Others are fighting the winds and destroyed camps as Atanas Georgiev Skatov‘s home team tells us:

Nasko is now in Camp 2-K2. Despite the cold and fatigue, it is good. Unfortunately, the tent that was left in the Japanese camp 1 is destroyed by the strong wind, but the situation is under control. Thanks for the good wishes and the support you give him! She means a lot to him!

Other climbers on the SST permit are scattered between C2 and C3: Sergi Mingote and Juan Pablo Mohr are at C3. Tamara Lunger and Alex Gavan are at traditional Camp 2 above House’s Chimney.

Broad Peak – At Base Camp – Quiet

Zoltán Szlankó and Alex Goldfarb were at base camp but there are no recent updates.

Greetings from Manaslu C1 at 5.700m We left at 8 am, in this order: Simone, Kalden, Nurbu, Lur, June, Iñaki, Jon, and in a second shift, Cheppal and I. We transported material on the sleds. Since we charged up to the maximum we were slow but everything was fine. Cheppal, Kalden, Nurbu and I will spend the night up there. I will keep you updated, really nice sensations