Climbers have left Camp 3 for their summit bid, half have already turned back due to the cold and fear of frostbite. The weather window has narrowed, now higher winds moving to K2 early Saturday morning, around dawn, basically 30 hours from the time of this post. They need to get up and down now, or turn back. The wind chill near the summit is -70F/-57C. There are 10 or less still pushing for the summit.

Multiple Sherpas are reporting frostbite. Not sure of the reason (other than the obvious cold) but in this day with the technology available, frostbite is generally rare assuming the proper gear, but these are incredibly harsh conditions. Nine of the ten who summited on January 16, reported some form of frostbite.

Thus far these climbers have turned back:

Conflicting information on the Iceland/Pakistan team

Now confirmed that there was a tent shortage at C3. I was afraid this might happen with so many people, some very independent, attempting the summit at the same time. Seems like a problem that could have been avoided with a bit of communication and planning.

Nasko safely arrived at Camp 3 around 18:30 local time. We hope the window, which is quite short to keep. Forecast tomorrow at 10:00 pm the wind is expected to increase, which is why the summit attack will start tonight probably around 23:00 pm. (20:00 pm) Bulgarian time). Unfortunately, we have found out that there is a problem with camp 3 tents that are insufficient as a number, but so far everything is fine. In case Nasko contacts us, we will try to update the information we have.

Antonis decided not to continue his effort for the top as he is currently experiencing frostbite, possibly grade 3 on his toes, as well as he was informed that the weather is changing and making his effort prohibitive. Specifically he told us: “” I got here with a lot of mental and physical effort. Most sherpas have frostbite and we all try to repair the damage. Unfortunately my sleeping bag is at C2 and I will have to stay at 7440m all night at -38 C. “4 people from the whole team have started but 2 have returned due to the cold.” We will inform you about anything new.

This was the summit push schedule:

This is the latest wind forecast from windy.com (red is bad, green is good):

Weather through this weekend. Courtesy of Windy.com 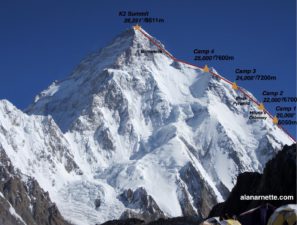 It appears these are the remaining climbers attempting to summit as of 2:45 am K2 time: