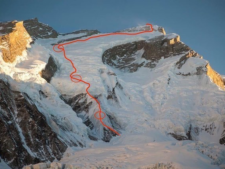 #4 UPDATE 19 April 2021: FOUND!! The Russian climbers are Sergey Kondrashkin, Alexander Luthokin, and Dmitry Sinev were found between C3 and C4 and brought down by helicopter longline. Luthokin was returned to base camp while the other two went to Kathmandu with minor frostbite.

#3 UPDATE 18 April 2021: The Russian climbers are Sergey Kondrashkin, Alexander Luthokin, and Dmitry Sinev are missing after leaving Camp 4.   Luthokin, had stopped around 7,000 meters and was already descending. In a disturbing pattern, Seven Summit Treks (SST) provided their logistics but usually claims all decisions are up to the climbers and they are not in control.

#2 UPDATE 18 April 2021: Update on the descent, three Russians are missing. A helicopter search is planning for Monday morning. No further information. source: russianclimb

After running out of rope the night before, it appears Annapurna saw 67 summits the night of April 16, 2021. By any measure, it was a record night for the deadliest 8000er. The deadliest metric will drop dramatically assuming everyone descends safely.  Everest permits are now at 338 and Lhotse with 104.

The summits might have an asterisk beside them as helicopter assisted almost all the teams after tough climbing conditions required more fixed rope than planned and the summit push group had to retreat to high camp for more gear (rope, food, fuel, and oxygen) to be helicoptered in from Kathmandu, a first to my knowledge of something of this magnitude occurred during the summit push. In 2017 on nearby Dhaulagiri, they also ran out of rope and abandoned the effort.

We only have names for 57 of the climbers. This breaks down to 26 of the 44 permitted members and 26 Sherpas in support.

Expedition Base also had success but is coy with the names: “Summits of some Expedition Base team members occurred approximately 1.40 pm local time. They are now descending from the summit. For friends of TM following, yes she did! Safe descents everyone!” he further posted “well done to our five (5) summiteers ” but still no names published by them.

Peak Promotions also had climbers summit, including the three Indians from the Giripremi team

Before these summits, there have only been 298 summits out of 1874 people above base camp for a success rate of 15.9. 72 people have died for a death rate of 3.84. This compares to a success rate on Everest of 39.16 (second only to Cho Oyu at 42.2 for the highest for the 8000ers) and a death rate of 1.16 according to the Himalayan Database. The female record was smashed last night with only 18 females summiters total previously and at well over 7 this spring.

Some of the Annapurna summiters will move to Dhaulagiri but the route fixing hasn’t begun. Among the climber is 82-year-old Carlos Soria is on this 12th (yes twelfth) attempt of Dhaulagiri. He only has it and Shishapangma to complete climbing all fourteen of the 8000-meter peaks.

I’m updating team location table and tracking climber’s blogs (see sidebar). If you have a team not listed, please let me know, and I will add them if I can track them. If you prefer not to be mentioned, please contact me.