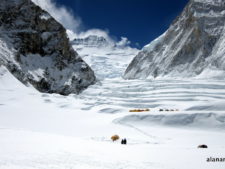 Everest Base Camp is quickly filling up. Sherpas are busy establishing and stocking Camps 1 and 2. Thus far the fixed ropes have been set to the Yellow Band around 24,000-feet. As previously noted, there are few trekkers this spring so the teahouses and trails feel empty to those I’ve spoken with. Internet at EBC is sketchy at best. There is one 40-person Chinese national team on the Tibet side, otherwise, it’s closed to foreigners. They established their base camp this past week.

This past week, most teams took time to settle into their new home and refresh basic climbing skills. The members practiced clipping in and out of the fixed line when crossing anchors and moving confidently over the ladders. There were a few members who went into the Western Cwm for a night or two at Camp 1. Some might have gone to C2 but not many if any. Heavy snow hit EBC over the weekend and high winds gusting to 40 mph were forecast for Sunday so most people will stay put.

There were mixed reports about a climber who got sick at ECB, was flown back to KTM where he tested positive for COVID but then said it might have been AMS. As I’ve said before, I don’t expect to read any bad news given the censorship Nepal is exerting over expeditions.

To see where teams are now, visit my team location table

This next week will see multiple teams make their first rotation to Camp 1 and 2. The usual schedule is to level early, as at 3 am for Camp 1, at 19,000′ taking five to eight hours. Arrive at C1 early around sunrise and settle in for a very hot day if there are no clouds. People usually put their sleeping nag on top of their tent to create shade.

The next day is an “active rest day” where they put all their climbing gear back on (big boots, crampons, harness, jumar, carabiners, etc.) and walk about halfway to C2 then return to C1 for the night. The next day is a move to C2 at 21,000′ where they will spend at least two nights but maybe three or even four before returning to EBC for a well-deserved rest.

The first nights at altitude will be miserable. Some climbers will experience Cheyne–Stokes respiration, named after the physicians who first described the condition. Also called periodic breathing, it is common at high altitudes and becomes more frequent with increasing altitude. Periodic breathing involves alternating periods of deep breathing and shallow breathing. Typically, three to five deep breaths will be followed by a couple of very shallow breaths or even a complete pause in breathing. A pause in breathing like this usually lasts around 5 to 15 seconds and is called an apnoea. Apnoeas may end with a gasp that sometimes wakes the individual. People may breathe this way for most of the night. Generally, this is not dangerous but can be unsettling for yourself, not to mention your tentmate!!

The permits for Everest continue to grow approaching the 219 record of 382. The Nepal Ministry of Tourism posted these foreign permit tally thus far. The Tibet side closed to foreigners but there are 40 Chinese nationals reported now at base camp.

UPDATE 18 April 2021: Update on the descent, the Russian trio of Sergey, Dmitry, and Alexander are missing. A helicopter search is planning for Monday morning. No further information. source: russianclimb

After running out of rope the night before, it appears Annapurna saw 68 summits the night of April 16, 2021. By any measure, it was a record night for the deadliest 8000er. The deadliest metric will drop dramatically assuming everyone descends safely.

The summits might have an asterisk beside them as helicopter assisted almost all the teams after tough climbing conditions required more fixed rope than planned and the summit push group had to retreat to high camp for more gear (rope, food, fuel, and oxygen) to be helicoptered in from Kathmandu, a first to my knowledge of something of this magnitude occurred during the summit push. In 2017 on nearby Dhaulagiri, they also ran out of rope and abandoned the effort.

See this post for the latest names of who summited.

Some of the Annapurna summiters will move to Dhaulagiri but the route fixing hasn’t begun. Among the climber is 82-year-old Carlos Soria is on this 12th (yes twelfth) has arrived at Dhaulagiri Bas Camp after trekking in the Khumbu for aclimitization. He only has it and Shishapangma to complete climbing all fourteen of the 8000-meter peaks.

Here’s the video version of the weekend update: