This summer K2 will see a rare event, an attempt on the fully unclimbed West Ridge. Canadian Ian Welsted and American Graham Zimmerman will make an alpine attempt with no oxygen. While the route has been partially climbed three times, the final few hundred meters have never been completed for various reasons. They leave for Pakistan on June 17. After an extensive acclimatization program which may include climbing the 8000er Broad Peak, they hope to summit near the end of July.

Ian and Graham have a long impressive history of difficult technical climbs. Graham has climbed the 7000-meters peaks including:

The Karakoram is the mountain range that I find most inspiring. It is where I have seen some of my biggest success as an alpinist, and it is where I have learned some of my most important lessons.There is one peak in the Karakoram that literally stands above the rest, a peak that I have seen on the horizon from several different summits and has always attracted my attention, the majestic and steep 8611m Chogori, or K2.

Ian is a professional mountain guide in Banff, Canada. From the Canadian Alpine Club on Ian: 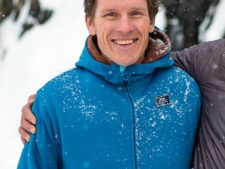 Ian is best known in climbing circles as one of only two Canadians to be awarded the Piolets D’or, for his first ascent of K6 West (7000m) in Pakistan. Born and raised in Brandon Manitoba Ian moved to Chamonix France at the age of 17. From this year in the mountains he returned to Canada to attend Ottawa University and McGill University where he studied economics and philosophy.

In his youth, Ian ski raced but was exposed to the full gamut of mountain pursuits in Chamonix. From skiing and snowboarding the backcountry powder of Nelson and Rogers Pass he moved to Canmore in 2005. Quickly integrating into the climbing community, he pursued waterfall ice climbing with 100 day winters before turning his attention to alpine first ascents. With this experience he began casting further afield and undertook expeditions to the Coast Range, Patagonia, Denali, to the Khumbu area of Nepal, and 3 trips to the Pakistani Karakoram. In 2016 Ian began the process of gaining ACMG certification so that he can share his experience gained over 25 years, and his love of the mountains.

I was able to get Graham for an extensive interview on the climb. We cover a lot of topics including:

Best of luck to Ian and Graham. Let’s chat when you get back.