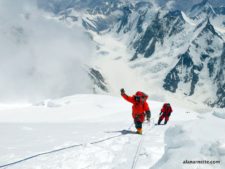 With the summits and tragedy on Broad Peak subsidizing, albeit, with still much unknown, the K2 teams are patiently waiting out the poor weather for their chance. However, it appears the mountain may have received well over a foot of fresh snow, thus increasing the avalanche danger, especially around Camp 3.

Information has closed down from K2 regarding summit plans. The recent chaos on Broad Peak has operators concerned the same could occur on K2 thus they are keeping their powder dry until they leave on their bids. The most experienced operators often have different strategies to deal with these situations from being the first team out to the last one. There are pros and cons to both but mostly it depends on the weather and the lead guide’s risk tolerance. They may leave BC in gusty winds hoping the weather forecast of calming conditions is accurate once they reach mid to high camps. In general, they want the winds under 30 mph for the summit push and descent to at least C2.

There are three large teams and several small ones on K2’s Abruzzi route. And one two-person team on the West Ridge. These routes only come together on the summit, unlike the Cesan which joins the Abruzzi near Camp 3. With the fresh snow, Sherpas and Pakistani Support climbers will probably go early to try and find the buried ropes and re-fix them if needed. We need to wait and see how this plays out and if there is any impact on the schedule.

The usual schedule for K2 is:

If teams leave BC on July 25th, that would have them summiting on Friday, July 30. Only the strongest climbers would have the option of skipping camps so, in theory, some could summit a day or two earlier or July 28th.

The three big teams of Karakorum Expeditions, Madison Mountaineering and Pioneer Adventure supporting the Ukrainian-Nepalese K2 Expedition 2021 and Alpomania teams are at Base Camp ready to make their summit push as the weather allows. Several of the smaller teams most likely will draft off their efforts following in the boot path and using their ropes.

The West Ridge team of Graham Zimmerman and Ian Welsted are holding at their base camp for the weather to play out. Graham posted:

Progress on the West Ridge has been moving forward in fits and starts. Route finding on the bottom of the route has been more complex than expected and the early spring snow has been causing some problems. But the summer heat has come to the Karakoram which is helping with the snow and we’ve got the route finding figured out. Right now it’s storming, but our forecaster @jp_yip is telling us that a weather window is on its way at the end of the week and we’ll be back at it.  Psyched.

Sajid Ali Sadpara who is searching for his father and two teammates who went missing this past winter gave us this update:

This is our 2nd rotation on k2. I know this mountain very well. This year I observe alot of snow in high camps specially C3 and C4. We searched these areas but we didn’t find any clus. Weather was perfect.

Multiple reports are being written about what happened on Broad Peak this past weekend. One thing that is common is the lack of overall coordination and cooperation by some climbers on the days in question. The details around Kim Hong Bin’s death and rescue remain opaque with no clear statement from his Korean team or logistics operator Blue Sky Treks & Tours. Operators are quick to claim credit for rope fixing, summits but never mention accidents or deaths.

Vitaly [Lazo] rappeled into a crack of 20 meters, and helped Kim to anchor — the alpinists began to climb. But after some time, according to the assumption, Kim’s jumar had been blocked (Vitaly was 5 meters down. He shouted to Kim — the Korean alpinist was moving, trying to unblock the jumar. Then there was a sharp fall, and Kim fell. With 99% certainty, we can say that he died immediately. It was horrible, but Vitaly safely climbed out of the crack and began to descend.

Some people who reported as summiting now say they only reached the fore summit, very common on Broad Peak as the last section to the true summit is treacherous. Plus some of the climbers arrived at the saddle late in the day after many hours of difficult climbing in deep snow. We will never know the true numbers from this year, as there is no analogous organization such as the Himalayan Database who does yeoman’s work to sort out the truth for the Nepal and Tibet 8000ers. It’s a shame the Pakistani Alpine Club does not step up to accurately chronicle the activity on their mountains.

Rather than reporting their updates here, I think it’s best to read what the climbers who were there are saying for themselves. For more reading take a look at climbers Anna Piunova and Saulius Damulevičius on Facebook plus Oswald Rodrigo Pereira on Instagram. Also this report by Angela Benavides at Explorers Web, who synthesized as much information as was available.

There are more Pakistani climbers wanting to attempt BP including Asif Bharti, and Sa’ad Mohamed with their Project Thin Air. They want to climb with no HAP support or Os.