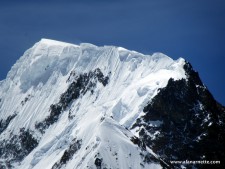 The summer of 2015 will go down as one of the more difficult seasons in the Northern Pakistan Karakoram climbing season. There have been deaths, illness courageous summit attempts, questionable summit claims and impressive summits. However, casting a huge cloud over everything was disturbing weather that made climbing virtually impossible for many.

Broad Peak: At Your Own Risk

The entire season started on an ominous note when Pakistani High Altitude Porter (HAP),Qamber Ali Jangjupa, was killed from an avalanche on the low slopes of Broad Peak, just below Camp 1.

Yesterday, a determined team from Himalayan Experience gave it their on Broad Peak trying not once, but twice to summit from Camp 3. Yet sugary snow, trapped under a thin layer of icy crust along with dangerous avalanche conditions caused the highly experienced team of climbers and Sherpas to turn back. They are all back at Base Camp now preparing to start their arduous trek back home.

This comes on the heels of about 30 climbers a few days ago making another attempt with the same results – soft, avalanche prone snow – forcing an orderly re without a summit.

Chris Jensen Burke, making her second attempt on BP in consecutive years posted a complete update on their attempt. She also noted what might be considered “aberrant” behavior amongst some of the climbing teams:

At the time of writing, I think the summit count on Broad Peak this season is unofficially one.  Lakpa and I did meet one chap on his way down maybe 2 weeks ago now who appeared delirious, but said he reached the summit, didn’t want to talk, descended, and then another climber 60 seconds behind him rolled his eyes in the direction of the delirious chap and said ‘no summit’.  A strong Polish chap in his 20’s from the Polish ski team advised us he reached the summit (on 25th or 26th) – I would kind of put him in the category of super human and I would like to have some of what he is on… a nice chap and yesterday he went to another mountain to provide rescue assistance to a fellow Pole.

Against this backdrop, Andrzej Bargiel is reported to have summited Broad Peak – alone – and skied from the summit, a first when confirmed. He would own the sole summit of Broad Peak in the summer of 2015.

Gasherbrums: A few Yes, Most No

Over on Gasherbrum I & II, similar weather forced many to stop or not even start their summit bids. Nic Rice along with several other international teams attempted a new route up GI but in the end felt the conditions were too dangerous to go for the summit and left early.

But a few were successful earlier in the season. Kari Kobler put six on the GII summit including an impressive performance by Sophie Lavaud who summited with no supplemental oxygen. Others attempted a few days later and were turned back including Polish climbers and skiers Olek Ostrowski and Peter ?nigórski. who were aiming to be the first Polish climbers to successfully ski down from summit of Gasherbrum II.

They tuned back above Camp 3 in difficult conditions and upon the return Olek Ostrowski went missing and is now presumed dead. It is assumed he fell in a crevasse or went off a steep ridge. Fellow climber Andrzej Bargiel expressed his outrage at how the search was conducted in this interview (use Google translate for your language)

On GI, a strong team of four, Thomas Seidensticker, Yannick Graziani, Ferran Latorre and Sadiq, from Catalonia successfully summited during this season.

However just when the season was thought to be over, Czech climbers Marek Holecek and Tomas Petrecek arrived at GI base camp intending to set a new route on the Southwest Face. This route has been attempted before, taking lives in the process.

K2 proved once again to be in a different league than any other 8000 meter mountains inside and outside of Pakistan. As I have written so often based on my own summit in 2014, K2 is steep steep steep with little relief and constant rock fall and avalanche danger.

With two major commercial teams, Madison Mountaineering and Himalayan Experience (Himex) plus a large team by Seven Summits Treks, there was plenty of manpower to use a siege approach on the mountain. However, Himex choose the Česen Route aka Basque Route and to acclimatize on the lower camps of Broad Peak while the other choose the more standard Abruzzi Spur on K2 thus splitting the force.

The teamwork of Nepali Sherpas and Pakistani HAPs worked hard early to break through deep, soft snow to fix lines to Camp 3 on both routes. Climbers went on one acclimatization rotation reaching Camp 2 on the Abruzzi and C3 on the Česen.

Then a very strong and experienced team lead by Mike Horn took the risk during a tiny weather window but turned back just above Camp 3 on the  Česen returning with the verdict that K2 was “unclimbable” this year – soft snow, exposed rock, avalanche and extreme rock fall – everything K2 is known for.

The next setback was a huge series of slab avalanches off K2’s flanks that shook up  the base camp community and buried most of the climbing gear of Seven Summits Treks. They dug for days and recovered most of the gear from under 15 feet of hard packed snow at Advanced Base Camp at the foot of the Abruzzi.

Five Sherpas moving up that same day reported the snow had slid off and down to the glacial ice. A large falling rock hit my longtime Sherpa climbing partner, Kami Sherpa, dislocating his shoulder and breaking his left arm and hand. A heroic effort got him back to K2 Base Camp then evacuated by helicopter to Skardu where he underwent surgery.

For Kami this comes on top of losing his home in Pangboche from the earthquakes in Nepal. I set up a fund to raise money to help Kami and his family with ongoing medical expenses and to rebuild his home. Please contribute if this speaks speaks to you. Thank you sincerely.

With all this, Himex and Madison Mountaineering said enough and ended their K2 climb, Seven Summits Treks soon followed suit. But this is a familiar situation for K2 in that since 2009 there have been only two years with successful summits from the Pakistan side of the mountain: 2012 and 2014. In 2011, Gerlinde Kaltenbrunner lead a small team to summit from the Chinese side.

Russell Brice summarized the conditions on both Broad Peak and K2 as follows:

I dare say that I need to explain why we elected to continue to climb on Broad Peak even after we had decided to cancel climbing on K2. These mountains and the routes that we were attempting are completely different. The Česen route is very steep and is mainly a rock climb but with snow covering. The upper part of the route does move onto a glacier where we were expecting deep unconsolidated snow. But as the temperatures have been so high the snow has almost disappeared on the lower part of the route thus exposing green ice with water running down it, and there was also much rock fall.

As opposed to Broad Peak, which is a much less steep route and is mainly on snow slopes. The most dangerous part of this route is from Crampon Point to C1 where the avalanche came down earlier killing one person and injuring several others. Now that this slope is denuded of snow there is also green ice but also a lot of small rock fall, however contained in various shoots that dissect the snow slopes. Once above this, the route is relatively safe, however because of the low angled snow slopes, the snow is very deep and unconsolidated, so it is actually like climbing through a bowl of icing sugar, but only thigh deep. Doesn’t taste so good either !! Obviously this also has the potential to slide off as well, especially once a trail has been cut through it.

So, my wishes to the remaining team on GI for a safe attempt, but the odds are against them.

2015 has been a difficult year on the world’s highest mountains. There have been deaths from Everest to Mont Blanc to Broad Peak and more. While death is part of climbing at these rarefied altitudes, something was drastically different this year, and I don’t mean earthquakes.

The ambient temperature at 6000, 7000 and 8000 meters was higher than in previous years. The snowpack was like soft ice cream and the rocks fell like rain. The “normal” routes became death traps. Team were unprepared to scout out alternatives and yielded to the inevitable choice of life over summits.

What the autumn season will reveal back in Nepal after the earthquakes is up to anyone’s guess. The normal routes will surely be different as a result of two earthquakes back to back that were well over 7 in magnitude. Personally I would not go first and would wait another year for the earth to settle.

But it could be more of the same as climbers flock to Peru, Argentina in South America. The question will be if the high temperatures will wreak  the same havoc on those high mountains in the second half of 2015

But adversity often brings opportunity. Perhaps we have a new era of exploration that will bring back adventure to the commercialized world of high altitude mountaineering – finding new routes on our most beloved mountains.