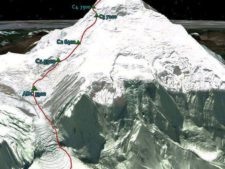 We have been following the efforts of 78-year-old Spanish climber Carlos Soria Fontan on Dhaulagiri.  They tried twice in September to summit including once going up the wrong couloir. By the time they discovered their mistake, it was too late with conditions worsening. They never got another good chance as conditions continued to degrade thus ending his 8th attempt over nine years to summit

But Bulgarian climber Boyan Petrov who was climbing at times with Carlos persevered and summited on September 29, 2017,  his 10th 8000er. He tired a week earlier without success, you can read about it here and for his summit push read here.

All of the links are excellent overview of their efforts.

Another Yes for Cala and Mathias and a great Photo

My friend László Pintér gave me the pointer that  Italian Carlo Alberto Cimenti aka “Cala” and Mathias König had reached the summit of Dhaulagiri solo from Camp 3.

Yesterday, the Italian Carlo Alberto Cimenti aka “Cala” has reached the summit of Dhaulagiri solo from Camp 3. Leader of the Italian-Swiss expedition, Davide Gerlero  already descended from Camp 2, passing on the photo of the late Luca Borgoni, who initiated and mainly funded the expedition, winning the Mountopia video contest. He fell to his death on the Matterhorn this July during training. He was 22. Cala took his photo to the summit of Dhaulagiri, as promised to his family.
The Swiss member of the team, Mathias König was together in Camp 3 with Cala, but decided to wait a little more with the summit push. Cala started first, alone, reaching the summit after an arduous climb, with wind and a lot of doubt, with no tracks in the snow and no fixed ropes. Two hours after Cala, Matthias also left Camp 3 and headed to the summit. Later he met the already descending Cala and reached the summit himself. They made it safely back to Camp 3 and are heading down the mountain to base camp today.
The original plan to ski the whole mountain has not come together, further details are avaited. Photos show that Cala did ski some parts of the mountain though in the past weeks.

On Facebook Cala’s team posted this great picture with the details: 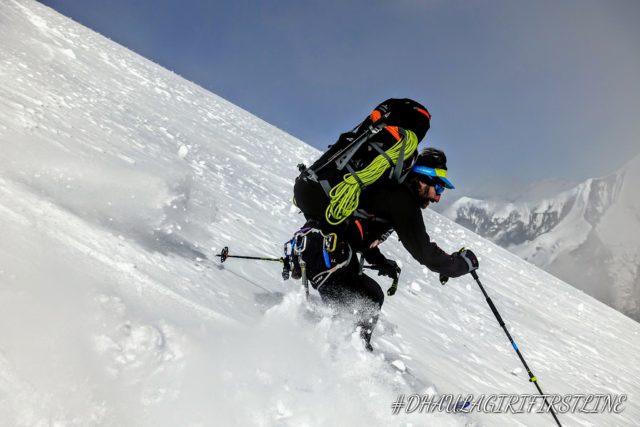 And, One More First Ascent! 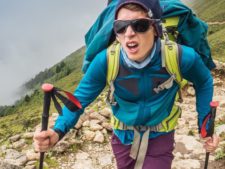 There was another first ascent in Nepal! Jost Kobusch claims to have accomplished the solo first ascent of the 4th highest unclimbed mountain in the world, Nangpai Gosum II at 23,937/7296m on the border of Chia and Nepal.

Hans Kammerlander is headed back to Manaslu on October 11, 2017.

After losing two close teammates, Friedl Mutschlechner and Karl Großrubatscher, on the peak in 1991, he vowed not to go back being content with summiting 13 of the 14 800ers. One asterisk however is that he reached the central summit at 8008 meters, not the true summit of 8,027m on Shishapangma.

He posted on his blog:

I decided to return once again to Manaslu. That mountain where I lost two good friends in a tragic and fateful day 1991st I am now of the opinion that I have thus been waiting far too long. Perhaps the time is really ripe for it only now. Together with my North Tyrol friend and partner Stefan Keck, a mountain guide colleagues from Stans, I will now leave early October on an expedition to Manaslu. We are accompanied by an Austrian film crew which reconstructs important phases of my life for several weeks. This documentary feature film will then be released in the autumn 2018th

We want to try to tell at this point more or less regularly over the course of our plan to cruise the Manaslu after climbing with skis. Not always it will be possible technically to connect to Europe. But together with my friend and author Walther Lücker want Stefan Keck and I try to keep you posted.

For more on this 60 year-old please read this excellent interview by Stefan Nestler.