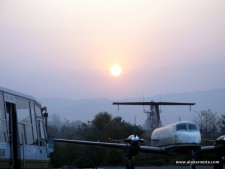 Our fictitious Everest climbers and trekkers are scheduled to fly to Lukla today. Known as one of the world’s most dangerous airports, it’s a time of high anxiety. There have been seven crashes since 2000 killing over 50 passengers and crew. However, to keep these tragedies in perspective, there are thousands of passengers safely flown each year between Lukla and Kathmandu.

There are several challenges flying in and out of Lukla. First, there is only one runway that sits at the top of a 2,000-foot cliff and ends where a high mountain wall begins. There is no opportunity for a missed landing or equipment failure. There is no radar or electronic landing assistance so pilots are strictly on visual flight rules aka VFR which simply means they must talk among themselves during landing and taking-off and have limited assistance from any form of air traffic control.

Second is the weather. Lukla sits at 9,400 feet surrounded by the low peaks of the Himalayan Mountain Range. The airport is often shrouded in low clouds, rain or snow shutting down visibility, and that’s an issue in a VFR environment!

It takes a special aircraft to land and takeoff on such a short area. Known as short-takeoff and landing or STOL planes, the fleet of Twin Otters, and Dorniers flown by Yeti Airlines, or Sita Air fly climbers and trekkers for about USD$140 one way.

Her eyes were wide open as the clock clicked to 3:00 am. Nervous energy was working hard to prepare her for one of the milestones of any Everest expedition, the flight to Lukla. She thought about decades ago when climbers would make the trek from Kathmandu to Jiri and on to Lukla or maybe Namache, about a 100-mile walk taking over ten days. But today, climbers and trekkers use helicopters and fixed-wing specialized aircraft to get there.

She had packed her duffles last night after another hour checking in with her kids and husband over Facetime. She really missed them. She lingered in the shower, enjoying the hot water, albeit at low pressure. But She was grateful knowing showers at base camp were a rare luxury.

“Good-morning my Queen.” Dutch greeted her as She came down the stairs lugging one of her bags. “Let me help you with that.” He grabbed the bag and parked it next to the pile. It was amazing how much gear it took to climb mountains, and the real stash was already at base camp, carried by porters and yaks. The Climbing Sherpas had been at EBC for over two weeks preparing tent platforms, setting up the various tents, and making the camp as comfortable as possible for their members. They did so much work behind the scenes that was invisible to the members.

Guide was prepared, looking like he just left a photoshoot. Not a hair out place, shaved, wrinkle-free shirt. “How does he do that?” Snorer whispered to the Old Man. “Hell if I know, I’m lucky I woke up this morning!” He grumbled back.

They piled into two vans with their gear for the ride to the domestic terminal at the airport. Everyone was quiet, either nervous or still waking up. The roads were also quiet, only a few dogs rummaging through the garbage left on the streets. No cows this time.

Dawa and a few others grabbed luggage carts, and everyone pitched in to transfer the bags to the check-in for Yeti Airlines. Each bag was weighed on a huge scale. The scale’s long-arm swung up and over with each bag. “27 kilos, that OK,” said a young man working fast. The schedule was critical because Lukla has poor weather, and flights are regularly turned back, even after they left Kathmandu when low visibility shuts down the airport. “OK, now we weigh each of you,” he called out to the group. “What, we have to get on the scale?” Snorer moaned. He was slightly embarrassed about his waistline. He stepped as lightly as possible on the metal platform, watching the arm swing hard and fast to the right. When it stopped, he quickly hopped off, hoping no one saw the number.

Security consisted of a man in a military uniform going through the handbags, primarily looking for matches, lighters, and batteries. Once clear, they all assembled in the waiting room to start the time-honored ceremony of “Flight Watch.” The monitor showed “Kathmandu – Lukla YT145 7:25” They sat down. The couple appeared with a tray of small coffee cups. They had bought one for everyone. Nice touch, She thought. Taking advantage of the airport’s WiFi, everyone soon became immersed in texting, posting, or surfing. While they were counting on WiFi throughout the expedition, they knew better than to assume it would always be available.

To no-one’s surprise, the monitor updated their flight status. Now it would leave at 8:00. The slow creep of delays had begun. “OK, everyone, let’s go. The plane will leave at 7:15!” Guide yelled to the group from the door. Exchanging glances of shock, they scrambled to finish their Sanka coffee and grab their backpack. Back on the same bus that drove them the terminal when they arrived, this ride was a bit longer, taking them by the Nepali Military area. One massive chopper stood out, a decades-old dual rotor machine. It is often used to carry tons of gear as high as possible offloading the yaks and porters from the heavier cargo. 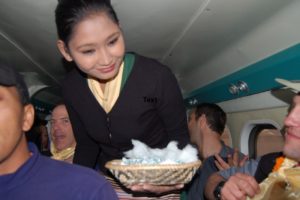 “Think this thing is safe?” the boyfriend asked Loner. He shrugged. They gave their pack to a man who put them into a small section in the back of the plane and crawled up the five steps and into the single-aisle plane. The Twin-Otter had three seats across and six rows. The Mount Everest Guides’ team took up the entire plane.

Now five hours after her wake-up call, She settled in her seat, smaller than a 4th Grade school desk. The flight attendant came by offering a single piece of hard candy and a wad of cotton. She looked at the cotton, confused. The pleasant flight attendant pointed to her ear. “Oh, for the noise?” She said to the nodding young woman.

It all made sense as the twin-prop engines started up—a tremendous whine and then a roar. Just as the sun rose, the Twin Otter STOL aircraft took off. The flight to Lukla was short – 30 minutes. For once, She wished for a longer one. Leaving the Kathmandu Valley, She had a perfect view of the rolling terrain of Nepal. She marveled at how crop fields were carved out of steep hillsides, home, and roads built on mountain ridges. She thought about the resilience of the people.

The plane jerked as it flew over a thunderstorm. The props squealed as they fought for power in the thin air. She instinctively tugged at her seatbelt. She glanced over at Dawa, he was asleep.

Looking into the cockpit for reassurance, She saw that one pilot had his hand on the yoke, both pilots had their hands on the throttle – standard procedure, but her heart rate increased, nonetheless. In her mind, She knew these pilots had made these flights hundreds of times, but her anxiety heightened. She thought of her kids.

The whine of the twin engines was deafening. She pushed the cotton wad in a bit deeper. Then in a blink, the Otter’s wheels gently touched the runway. The engine roared as the props reversed. She glanced out a side window to see a blur of motion. Will we stop in time? She lunged forward as the brakes brought the small aircraft to a halt. Everyone applauded. Smiles of relief were spontaneous and involuntary.

“OK, everyone. Grab your bag and follow Dawa. We will go over to one fo the teahouses for a proper breakfast before starting the trek to Phakding.”