One of the most interesting times of an expedition is when the entire team meets for the first time. You don’t know what to expect, but you do expect a wide range of personalities. Will everyone get along? Who do you want to hang with and who do you want to avoid?

“Be in the lobby at 6. We will walk to dinner.” Dawa said to the team as they headed back to their rooms after the day tour of Kathmandu. She felt good, invigorated by the experience of the day. She was happy to meet more of her teammates, anxious to meet the Western Guide. He had a reputation, and She was curious to meet him in person.

Entering his room, 303, Dutch saw his roommate had arrived. Two duffle bags sat next to his bags on the floor, but it was the sound that caught his attention. The snore of all snores emitted from under the blanket in the bed next to Dutch’s. It was grinding, piercing, thundering, and a bit scary. Dutch stood at the end of the bed, staring. A full-grown man with one leg hanging off the bed, the other under the sheet, his arms stretched over his head, his bare chest heaving with each eruption. With a snort and honk, he jerked to life sitting straight up, eyes wide open staring at Dutch staring at him at the end of his bed.

“Hello!” Dutch volunteered, trying to manage the moment. “Um, yes, hello mate.” Snorer said, trying to maintain a semblance of dignity. “Just get in?” Dutch began the conversation. “Yeah, flight was late, had to wait on bags and a ride. You know the drill. Been through this enough that you’d think I wouldn’t be surprised anymore. But this is Nepal, after all,” He said with a wide yawn that revealed multiple cavities filled with silver in his mouth. “Well, we meet downstairs at 6. I’m going to take a shower. Maybe the last I get for weeks.” Dutch said as he went into the bathroom. As he turned on the water, he heard the freight train resume its journey, or maybe it was a steam train.

One by one, the team walked down the stairs and into the hotel lobby. Most were wearing hiking shoes, some sneakers, and others simple sandals. “Over here, everybody.” an authoritative voice announced. They gathered around a tall young man, perhaps 30. He was lean, almost gaunt, but his arms had muscles, not huge ones but defined. His waist was slim. One look said he was a climber. “From Mount Everest Guides, welcome everyone. With Dawa’s and the rest of the staff’s help, we will all be standing on the summit of the Big E on May 20, only six weeks from today. But for now, let’s go eat.” And with that, Guide moved towards the door. 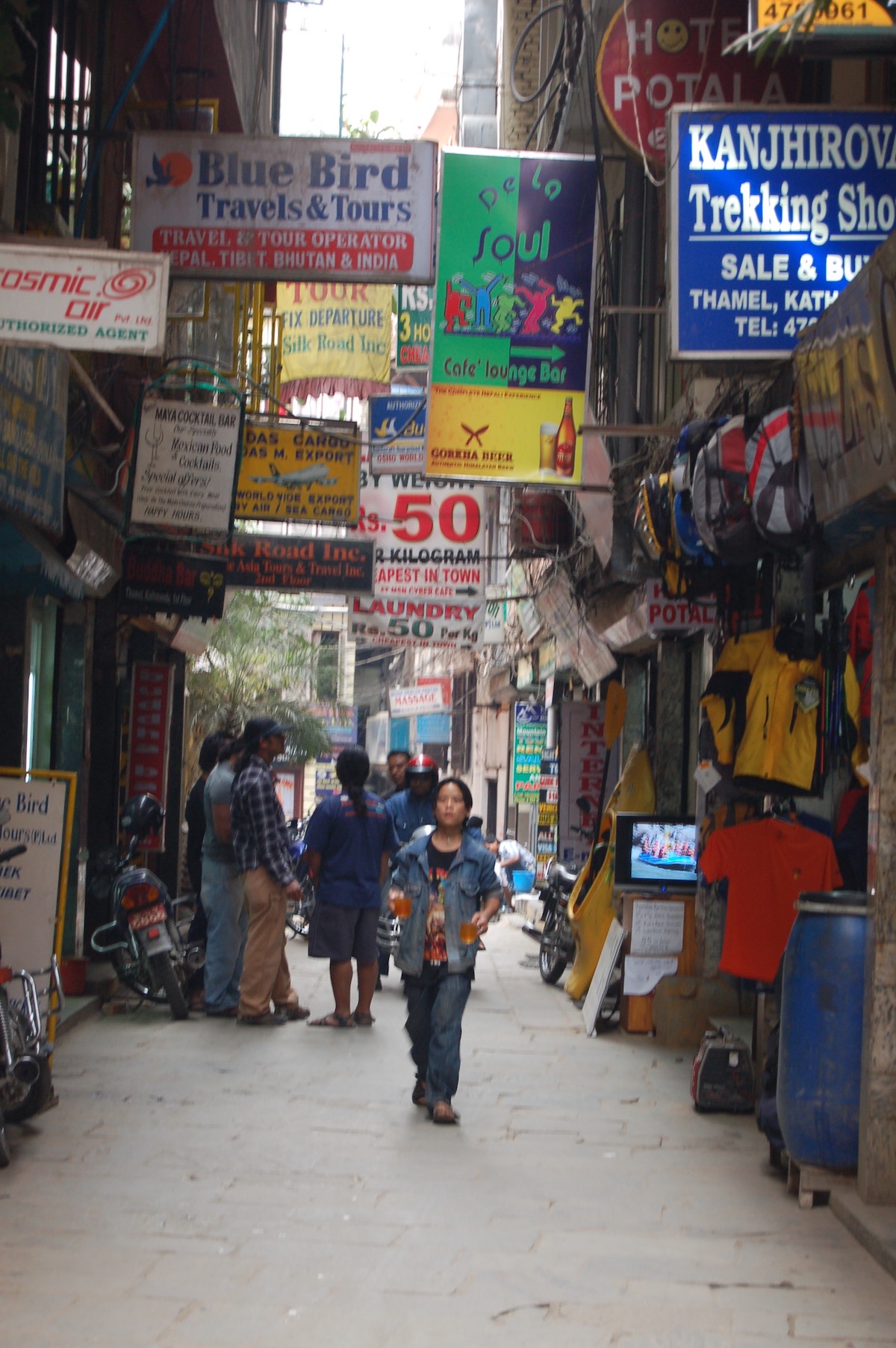 Walking down the street, She tracked down the young couple walking hand in hand. He was on the street side, remembering what his father had taught him about manners. The man always walks nearest the traffic. His girlfriend didn’t need protection. She looked strong and fit. The two women began to talk about home, family, training, and dreams. “My mother has always been a central figure in our family. She lives with us.”

They walked down the narrow dirt streets of Thamel to the restaurant. It had an excellent reputation, and from now on, Mount Everest Guides was footing the bill, except for drinks. Inside the Roadhouse Cafe, they sat at three tables pulled together quickly by the staff. She counted the people—one Guide, three trekkers, eight Everest climbers, and of course, Dawa. “Hmm, two are missing.” She thought. “If you are wondering where the rest of the team are, they left a few days ago to trek to base camp by way of Goyko. They will meet us at EBC.” Guide offered to the group. She liked that he anticipated a question and volunteered an answer—good first impression.

Dutch and Snorer sat next to Dawa and immediately drilling him with questions. “What’s the route look like in the Icefall this year? How many teams? Was there a lot of snow this winter? What do you think the conditions will be like?” Dawa patiently addressed each one as his pizza arrived. Guide was sandwiched between Loner and the Old Man, who looked very tired.

“So let’s go around the table and hear a bit about everyone. Keep it short, plenty of time to get to know each other over the next six weeks.” How about you first?” Each one spoke for a few minutes, a few a bit longer. Snorer cleared his throat and began, “Well, this is my fourth trip to Nepal. Climbed Imja Tse in ’12 then Mera and Lobuje in ’15. Got Manaslu, you know it’s an 8000er. Anyway, got that in 2018. Would have gotten more but hard to get away from my practice. Anyway, love Nepal and those Climbing Sherpas. Can’t do it without ’em.”

“OK, we’ll go next. You first?” The girlfriend began. We’ve been together for six years and have climbed everything together.” She began. He quickly interrupted, “She’s a stronger climber than me. She got Denali when I had to turn back at High Camp.” She jumped back in, “We summited Aconcagua together in January, but it’s been tough to get time off from work and save money at the same time. But here were are! It’s our first time to Nepal.”

She listened intently to the introductions. With her climbs on Kilimanjaro, Denali, Aconcagua, She felt prepared, but it bothered her that She had not been to 8,000-meters. She wondered how her body would perform at that extreme altitude. “I’m married and have a 12 and 14-year-old back home. Everest has been a life-long dream.” She kept her introduction short as She could sense Guide was getting a bit anxious with all the talk.

How about you? Guide leaned over to Old Man. “Well, not much to say other than this is my last chance. I tried last year and made it to Camp 3 before I got sick, got tired, gave up. Hell, to be honest, I’m not sure what happened. But I thought I have the time and money, and there is really no one at home, so why the Hell not try one more time? His voice trailed off as he took a bite of his giant cheeseburger. They all sat quietly for a minute, eating their pizzas, hamburgers, pasta, enjoying the quality of the food, and the casual atmosphere. “Everything tastes good?” the young waiter asked with a pleasant smile. “Yes, thank you,” Dawa said.

Seeing an opportunity to jump in, Dutch grabbed the stage. Standing up, he started. “First, it’s an honor to be here with everyone. I’m sure you are as excited as I am to be attempting Mt. Everest. And I’m sure with Dawa and the team’s excellent help; we will all make it, be safe and return home with all our digits and important parts.” She smiled inside at his formality. He was quirky but also endearing. She liked him. She noticed that Loner has gone to the toilet a few minutes earlier and never came back.

“OK, team, we have an early start tomorrow. A simple breakfast in the lobby at 3:30. The van with our bags leaves at 4. Make sure you have one duffle packed to go straight to base camp and the other that will be carried by porters for the whole trek. I suggest asking for a wake-up call. Please don’t be late.”

She walked back at a quicker pace than the rest, wanting to Facetime with her kids before flying to Lukla. A calm wave embraced her as She let the moment sink in. Yes, She was in Kathmandu, on her way to climb Mount Everest.

One Response to “Virtual Everest 2020: The First Team Dinner”