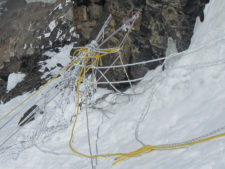 
With this wind event apparently over (they are never really over on K2!), the climbers are preparing to go back up to either finish acclimatization rotations or for their summit bids. At least one team is leaving BC today for the summit. Also, why are the ropes left on K2, and other mountains?

Not a lot to report given the winds on Friday were unbelievably strong. It appears lots of people are taking the time to evaluate their next steps. Most of the best and most experienced climbers are announcing they will stay and give the summit a go when the weather allows, perhaps in a week or so. Would be nice to see more summits in February to ward off any winter definition controversy.

Ropes on the Mountain

I get a lot of questions about the fixed ropes used on these 8000-meter peaks. Who puts them there? Are they removed? And a lot of comments about disrespect and trash. So, let’s try to break this down. I’ll use K2 as the example, but the principles are the same for Everest, Denali, etc. Let me start with a disclaimer that there are large differences in preferences, styles, training, and attitudes about the best way to set the rope, so what I’m about to say is just one view, and I’m sure I will get comments. 🙂

First, why ropes at all? Simple answer, for safety. But also to show the route in conditions of low visibility. Climber use the ropes to climb the mountain using a mechanical device called a jumar and to down-climb using a technique called abseiling or rappelling.

Very rarely will someone, like Messner’s 1980 solo climb on Everest, climb an 8000-meter peak and not use fixed rope, but this is paramount to Alex Honold’s free solo of Yosemite’s El Capitan. The world’s best climbers will rarely not use ropes for the full climb but will put rope in on steep sections for protection, especially for the down-climb. 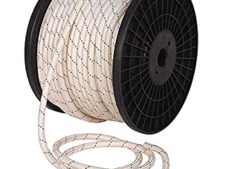 The line is usually thin nylon about the thickness of your little finger, perhaps 6mm, like a water skiing rope. Often it is made in Korea hence the nickname ‘Korean Cord.’ On K2, the route is usually installed from ABC at 18,650ft/5650m to the summit at 28,251ft/8611m, so over 10,000-feet/3000-meters is required (it’s not always a straight line between camps, requiring more cord than the difference in altitudes.)

The rope is ‘static’ such that it doesn’t stretch and can support 2000-2500 pounds of load. Usually, there is an anchor every 100 to 150-feet, so it’s rare for so many people to be on one ‘pitch’ that the load exceeds the maximum. People often ask about the rope breaking after seeing pictures of long lines of climbers clipped to the same rope. I’ve never seen or experienced a line breaking under loads on these mountains. It may have happened, but it’s not common.

The line is attached to the mountain using a variety of methods depending on the terrain. For example, nylon strips of webbing, aka slings, are wrapped around large rock outcroppings. Pitons, which are metal steel spikes, are driven into cracks in the rocks. Ice screws or lightweight aluminum pickets get buried or are driven into the ice and snow are very common.

As for who does the work? On Everest, there is a dedicated team of Sherpas, aka the Icefall Doctors, who fix the route from Base Camp to Camp 2. On K2, a consortium of teams works together. Usually, the largest expedition will buy and bring enough cord to fix the mountain, but others will bring a few hundred meters to contribute. It’s customary for any climber whose team did not bring or participate in fixing the route to pay the other teams a small amount, a few hundred dollars per climber, to offset the costs, and pay whoever does the work for their time and effort.

As noted, fresh rope is put in each year because the sun’s ultraviolet rays will rot or weaken the nylon lines in just a few months. So given that K2 is usually climbed each July, it’s foolhardy to clip into last year’s line because, quite literally, your life depends on the strength of that line if you fall.

Another common question is how do you know which rope to use. Usually, the climber will trace the line entering an anchor station and find it leaving the web then clip-in. The new line can also be a different color or not faded by the sun, so it’s not a huge problem to identify it.

Now, as to why the lines remain on the Hills, well here’s the deal – it takes a lot of work, energy, skill, and strength to carry those ropes up, or down. To ask the fixers who are placing new lines to also clean the old ones, well it’s just too much. The old rope is often frozen into the mountain requiring chopping it out thus requiring more energy, also it can be loaded with ice making it heavy. So just “removing the rope” is more complicated than it appears.

A lot of people suggest the last team on the mountain should “clean” the mountain. This request is a chicken and egg problem in that they need the ropes to get down, so to ask them to remove the ropes, carry them down (with anchors, etc.), and “free climb” with no protection, well it’s not going to happen.

Over the years, a team (usually a National team of the mountain) will take on the task and clean things, but it’s rare. In 2014 a Pakistani/Italian team brought down something like 2000-meters of old cord. Asian Trekking in Nepal has done something similar on Everest over the years.

So, what is the solution? Today’s “team” is a collective of individuals and “teams” compete on the mountain for timing and access. They may cooperate to fix the mountain, but no team will fully clean the Hill other than their camps. It’s really up to the country’s government to manage this – perhaps through funding from permits … but that may never happen in places like Pakistan or Nepal.

This is a video of James Bond stuntman and one  of the original Yosemite Dirt Baggers, Rick Sylvester, explaining an anchor station using decades old pitons on K2 between ABC and Camp 1 around 19,000-feet. (bear with any delays, it’s worth your patience)

John Snorri Sigurjonsson with Muhammad Ali Sadpara and his son Sajid Ali are leaving for a Monday summit. John sent me a message detailing their plans:

Plan for summit push at 2100 tonight from bc. If wind is not to strong we hope to reach summit 25th jan at 0900 in morning

It appears they will try to get to C3 from BC in one push arriving on the 24th, taking a short rest then the summit on the morning of the 25 targeting 9 am.  This is an extremely, extremely aggressive schedule. Given that at least Sajid will not using supplemental oxygen, it will be even more difficult.  The one advantage they have is that some of the route is already fixed last Saturday’s summit team. You can follow their progress on their GPS tracker

Seven Summits Trek’s has their team at base camp. By my count there are 18 members and about 20 Sherpas still left. Dawa posted this video from Base Camp:

Marc Batard arrives at K2 BC for a Look-See

Marc Batard, is at K2 Base Camp in jeans, apparently. In 1988, he established the record for the solo ascent of Everest without oxygen in 22 hours and 29 minutes from the base camp and was the youngest mountaineer to climb an 8,000 without oxygen, Gasherbrum II. He wants to summit Everest in 2022 at age 70.

Manaslu – Back to Base Camp

Simone Moro, Alex Txikon, and Iñaki Alvarez are back to Manaslu Base Camp after going down to the nearest village to wait out high winds. Tenji Sherpa and Vinayak Jaya Malla are at Manaslu Base Camp ready to move higher.

It was incorrectly reported per their support team directly to me that Tenji and Vinayak had given up on climbing Alpine style, they haven’t. Like the others they are waiting out weather at Base Camp and will make an alpine style push, i.e. from base to summit in one stage and not use traditional rotations. They have acclimatized on other peaks.

Today I climbed from Samagaon up to here in 2 hours 23, I was really feeling great, we did well to go down and oxygenate. Today should be the day that the winds drop to 90 km/h and tomorrow and the day after tomorrow they will rise to 150 km/h. These are the winds at the summit, but proportionally they are here. These are crazy winds. Tomorrow I get up and if I see that there is a chance I would like to put on the high altitude suit and climb a little making 1350 m. of elevation gain. Going higher just can’t be done, we have to be patient. Stay tuned! Ciao to all.