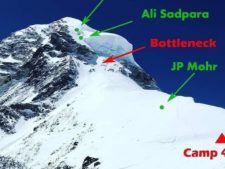 The summer Karakorum season is over, well, I think so. There are always a few surprises. The 48 summits on K2 were close but not a record. 2018 saw a record with 62 total summits, followed by 2004 with an estimated 51. This season saw two deaths, one on a new route on K2 and one on Broad Peak. Overall there were around 100 summits in the Karakorum.

With COVID lurking, the climbing season in the Karakoram was not as large as everyone hoped. Permits issued this summer were for 75 support climbers with 128 foreigners. Many BP climbers were also on K2, so there are duplicates; thus, the total is less than 203, probably around 185. permits for the various peaks, including the four 8000ers: K2, Broad Peak, Nanga Parbat, Gasherbrum I, and Gasherbrum II. Overall there were around 90 to 100 total summits across all the 8000ers, with none on Nanga.

As usual in the Karakorum, the weather played a role this summer. Conditions began well, but soon a steady mix of snow and wind halted progress allowing only a few sporadic days where teams tried to thread the needle. It wasn’t until late July that a long enough window emerged that allowed climber to ascend and descend K2 safely.

A new factor this season was the new 4G cell tower recently installed in Concordia. Even with sporadic outages due to weather and power, teams were able to send updates to social media and home, plus I was able to do live Zoom interviews directly from Base Camp! Now on to who did what.

The big teams on the Abruzzi Spur had a lot of success. Madison Mountaineering had 21 people on top: 9 members, 9 Sherpas, and 3 Pakistani climbers. Part of Madison’s team were British guides Kenton Cool and Jon Gupta who summited with their individual clients.

Mashabrum Expeditions Treks & Tours saw three summits lead by Sajid Ali Sadpara, son of Muhammad Ali Sadpara who died on February 5, 2021, along with teammates John Snorri, and Juan Pablo Mohr Prieto. Their bodies were found by Madison’s Sherpas while fixing ropes near the bottleneck and Alpomania owner Valentyn Sypavin. More on this in a moment.

Nepal’s Pioneer Adventure, the only other team that brought Shepras over from Nepal along with Madison, supported the Ukrainian-Nepalese K2 Expedition 2021 of three Ukrainians and three Sherpas plus a separate team from Ukraine, Alpomania supported by six Sherpas. They put a total of 19 climbers on the summit. Also, Hushe welfare mountaineering and climbing school, saw seven summits on K2, three on Broad, and two on GII spread across several teams.

The other large team, Pakistani operator Karakorum Expeditions lead by Mirza Ali’s had eleven clients on K2 and Broad Peak supported by 22 Pakistani climbers plus European mountain guides Austrian Stephan Keck and Spaniard Jordi Tosas who assisted the five-person Pakistani rope team. They made a large effort on Broad Peak and their team fixed the ropes to the summit, but lost their momentum on K2 and ended the effort in mid-climb. Keck paraglided off Broad from 6600-meters!
Tragically, Scottish climbing legend Rick Allen died while attempting a new route on K2’s Southeast Face along with Keck and Tosas. It was reported he was caught in an avalanche. His body was recovered from the glacier near ABC. His teammates were rescued by a Pakistani long-line helicopter.
Graham Zimmerman and Ian Welsted gave the West Ridge a strong attempt but snow and climbing conditions conspired to stop them around 7,000-meters. They had acclimatized on Broad Peak also to 7,000-meters before heading over to K2. They were the only team on that route this year.

Perhaps the most drama of the season occurred on Broad Peak, which mistakenly is often advertised as an “easy” 8000er. It’s become common to have many small, independent teams on Broad while some large teams like to acclimatize there before going to K2. This year showed the issue with this model. There were three serious summit waves but only one succeeded, and that was marked with rescues and death.

Strong climbing veterans Don Bowie and Lotta Hintsa broke trail early on in the season but deep snow conditions stopped their progress. When a window appeared, all the other teams jumped in apparently agreeing to share the work. However, people got sick due to lack of simple hygiene in the high camps, others choose to stay in their tents and not contribute as promised but three climbers from Mirza Ali‘s Karakorum Expeditions, Jalal Uddin, Eid Muhammad, and Faryad Karim got the rope to the summit and the rest followed.

Karakorum Expeditions‘ Mirza Ali gave this update on the lack of teamwork when it got difficult on Broad Peak thus ending this first summit push.

So our boys ploughing through deep snow fixing ropes just below the V for almost 12hours retreated to camp 3, there was no support, no piece of ropes from any other team except the Korean team who fixed 300meters above camp 3, and some 200 meters fixed by lotta and don @karakorumexpeditions reorganised at camp 3 and going for the summit tonight! The first team will open the V and then to summit, second-team with clients! ! The fixing team and clients are on the move toward the summit! Please keep your fingers crossed

The next attempt included many teams plus a Korean team lead by Kim Hong-bin who summited but tragedy struck on the descent. The details are getting clearer but it began with a Russian climber, Anastasia Runova, falling onto a snow ledge on the Chinese side of Broad Peak.

The next event was Mr. Kim falling onto the same ledge. Most likely both climbers mistakenly took old ropes down the 70-degree Chinese Face of Broad Peak instead of retracing their steps back to the Pakistani side. In spite of a valiant effort by Russian Vitaly Lazo to save him, Mr. Kim died when his jumar reportedly slipped off the icy rope and he fell down the sheer icy walls. Kim had lost all ten fingers to frostbite in 1991 while climbing Denali. Broad Peak was the last of his 8000ers. Vitaly has an excellent write up of the events at this link

Near the end of July, 20 climbers made one last push for Broad Peak but deep, unstable snow stopped them.

The Gasherbrums saw mixed success with a lot of ambition. Marco Confortola, along with fellow Italian Mario Vielmo with Pakistanis Hassan Jan and Fida Ashur, made a strong effort on GI but in the end, the snow was too unstable for them to be safe. An Italian team lead by Mario Vielmo did put four climbers on GI’s summit. On GII, The French team of Boris Langenstein, Tiphaine Duperier, Aurélia Lanoe, and Guillaume Pierre summited and skied down to Camp 1.

Over on Nanga Parbat, a Spanish team led by Manuel Gonzalez wanted to repeat Reinhold Messner’s climb of the Diamir Face but found the goal a bit too ambitious. They canceled the expedition due to weather and slow progress after reaching C1 at 5500-meters.

These days there are always climbers who are the first from their country, gender, heritage, or something claiming records. Here are a few of them, (I’m sure there are more so please leave a comment):

One record, I’m glad didn’t get achieved was that of 12-year-old Pakistani Selena Khawaja. Her father brought her to Broad Peak intending on her summiting but he got sick, was evacuated, and left his daughter there to climb. In the end, calmer heads prevailed and she left for home. Unlike China and Nepal, Pakistan has no age limits, high or low, for climbers.

Perhaps no sadder story this season than that of finding the bodies of the three missing winter climbers, Pakistani Muhammad Ali Sadpara, Icelander John Snorri, and Chilean Juan Pablo Mohr Prieto. Sherpas from Madison Mountaineering first found the bodies, still attached to the fixed rope above and below the Bottleneck. 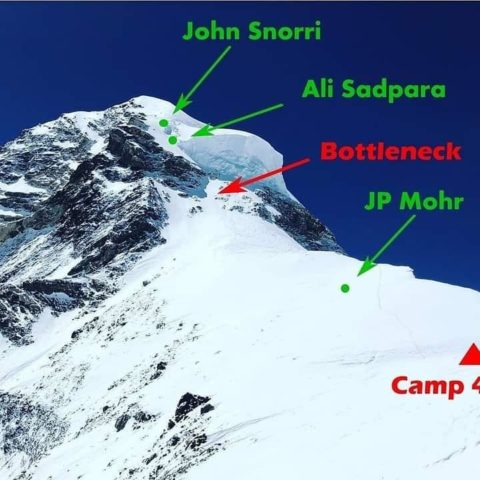 The bodies’ location, marked on a photo by Elia Saikaly. Photo shared by The Karakoram Club, Courtesy of ExplorersWeb.

Camera, phone, and GPS devices have been recovered from the bodies and will be thoroughly searched to provide clues as to what happened, but we may never know. Sajid posted this picture of where he buried his father along with his post:

This is the place where I burried my father Ali Sadpara. It’s very difficult moment for me that I stand near my father body. I was alone I am thinking that What I have to do. Then the Bolivian Climber Hugo Ayaviri Came like a angel and he helped me to bring father’s body down till Camp 4 from the most difficult part of k2.Thank you my friend for helping . Mission Sadpara is the mission during which I have to control my emotions I have to control my tears I was alone in one of the most important task of my life and I take decision from my heart in many stages and I am going to publish a vedio messages regarding all this search mission tomorrow. I want to say “That most of my father’s friend said me that you’re father was lucky that he died in a world which he like.” Ali will stay in mountains forever. 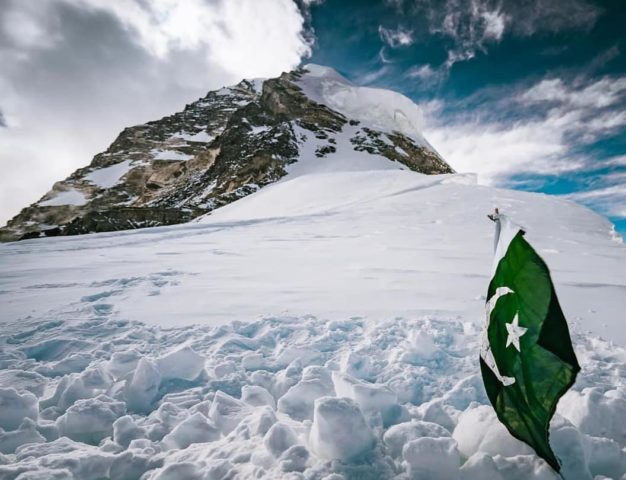 Congratulations to all this season. My condolences to family, friends, and teammates of those lost.

Next up is the late summer climbing season in Bolivia, the Alps, the US, and the Candian Rockies, Elbrus, Kilimanjaro, and more 8000ers which will focus on Manaslu since it appears China will not open Cho Oyu or Shishapangma to foreigners. We may see an autumn commercial expedition on Everest run by a Nepali operator and for another try later this winter for German Jost Kobusch on the West Ridge. And of course, it’s too early to rule out another K2 winter climb, commercial of course.