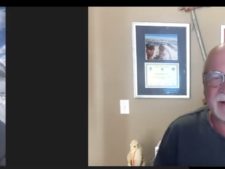 Garrett Madison, founder of Madison Mountaineering has now summited K2 three times. This is his sixth expedition to K2 making him the most experienced western operator to run regular trips to the Northern Terrorities of Pakistan. He was the leader for the 21 person team who submitted on July 28, 2018, at approximately 6:07 AM PKT (local time):

We discussed his team summit plus the latest on finding the bodies of the 3 missing winter climbers, and an update on the West Ridge effort – it’s not over.

In Garret’s own words:

Yesterday our whole team stood atop the world’s 2nd highest peak, today we all reached base camp safely. We were very lucky with not even a breath of wind at the summit, clear views in all directions, and excellent route conditions. It was spectacular!

In a season where most teams cancelled their K2 expedition plans due to Covid travel restrictions we found a way to make it happen thanks to great partners, persistence and a positive attitude. We had the mountain and route nearly all to ourselves compared to the last time I was here during a ‘normal’ season in 2019.

Things went so smoothly and ahead of schedule once we arrived in Pakistan just over a month ago that I was nervous something unanticipated would stop us dead in our tracks…or worse. But the mountain opened its arms and welcomed us to the top, granting us a 5 day weather window to make our summit bid. Our @madisonmtng Sherpa / Pakistani team worked tirelessly with the other Sherpa team here and got the route fixing done, a major component of our success on K2.

K2 is likely the world’s most deadly mountain with a ~25% death rate (deaths on attempt vs summits). K2 and Annapurna have traded places as the world’s most deadly peak in recent years…Currently only myself and 2 other climbers have reached the top of K2 three times (a Pakistani and a Nepalese Sherpa). I’ve never lost a client or staff member on K2, but I’ve seen others perish here. It’s a lot more rugged and dangerous than climbing Mount Everest to say the least. We’ve had a few ‘near misses’ with rockfall and avalanches but all okay so far.

I’m grateful we are all down safe from our climb on the ‘Savage Mountain’!