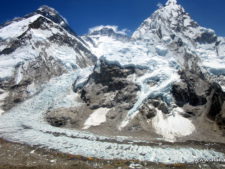 While most Everest followers are keeping a close eye on Alex Txikon‘s imminent winter summit push, the traditional spring season in just seven weeks away. And it looks to be one for the record books!

I base this prediction on the record autumn 2016 summits on Manaslu and high traffic on Cho Oyu. These peaks are often used as the final peak before going to Everest. Also, after the tragic seasons of 2014 and 2015,  2016 was a relatively safe season thus giving many people the false confidence that 2017 will also be safe.

Finally, many Nepalese operators have broken the stranglehold that long time western operators had on Everest. By breaking into the market using price, now they have proven they can run expeditions that meet the needs of a different market, primarily the Indian and Chinese middle class. This change has brought in 50 to 150 additional climbers each year for the past few seasons and is expected to grow. Many of the new members are climbing Everest now due to extremely low prices, regardless of their experience.

While I cannot verify all the statments made in this report of three Indian climbers who lost their lives in 2016, the article is illustrative of the risks and well worth a read: An Avoidable Tragedy.

These are a few of the Everest storylines to watch.

Uli Steck is supposed to attempt a Everest/Lhotse traverse – without supplemental oxygen. Steck is a bit wary of Everest after his clash with Sherpas on the Lhotse Face in 2013.

I’m sure Everest followers will recall the incident when Simone Moro and Sherpas who were fixing rope of the Face clashed about who had the ‘right’ to be there. Of course, both had the right but neither was very respectful of the other. Steck got caught in the middle and keeps his distance from Everest these days. Yet the call of the world’s highest peak is strong, even to someone of Steck’s fortitude.

Similar to a plan in 2013, Steck wants to take the West Ridge up to the summit of Everest then the ridge from the South Col direct to the summit of Lhotse, according to an interview with German climber and blogger Stefan Nestler in December 2016.

This would, of course, be the most beautiful, the perfect option. It’s my big dream if it works that way. But we have to look at the conditions. You can not say yet how they will be. Maybe I have to do the traverse via the normal route, and then, only in the next step, via the West Shoulder. I see that very realistically.

After gaining approval from the Nepal Government,  the Indians are remeasuring Everest this year to see what difference the 2015 earthquake had on the height. Reports immediately after the quake suggested Everest had dropped by 2 inches, about 5 cm but it was an estimate based on satellite data.  One would think that measuring the world’s highest peak would be somewhat easy given satellites, GPS and sliderules, but not so fast – even the naming has a convoluted history!

In 1841 the Great Trigonometric Survey led by Welsh surveyor Sir George Everest identified the location of the mountain. Fifteen years later using trigonometry and measurements from 12 different survey stations around the mountain, Indian Radhanath Sikdar, a member of the survey team, finished the calculations and determined they had found the world’s highest mountain. They called it ‘Peak XV’ and noted it was 29,002 feet.

In 1865 it was re-named Mt. Everest, against Sir Everest’s wishes, even though for centuries the Tibetans had called it Chomolungma. The Nepalese finally gave it their own name in the mid 20 century as Sagarmatha. In 1955, the height was adjusted to 29,028′.

On May 5, 1999 a National Geographic Society Expedition put a GPS receiver on the summit. Using a second Trimble GPS receiver at the 26,000′ on the South Col they made an extremely accurate measurement by running the two receivers simultaneously. The new altitude was measured to be 29,035 feet or 8,850 meters.

However, the Nepalese still use 29,028′ (8847m) as the official altitude. And the Chinese use 29,015 (8844m). The difference being if you count the snow on top of the rock at the summit or not. I still don’t know how they measured the ever changing snow depth.

To further complicate things, Everest is still growing as the Indian plate continues it’s move north under Asia. This is what originally created the Himalayan Range. Everest is estimated to grow 1/4″ each year and is over a foot higher than when it was first summited in 1953. This according to Professor Roger Bilham.

So what is the official height? It appears a compromise was reached and the official height of Mt. Everest is ….  both 29,015 and 29,028. Nepal and China agreed to accept each others measurement. Meanwhile most climbers use 29,035 feet or 8850 meters because it is higher. But we will see what the Indian Survey comes up with, and who will accept it! Glad we got that cleared up!

In the race to be the oldest person to summit Everest, 2017 will have another race. Nepali Min Bahadur Sherchan, now 86 years-old, is going to give the summit another try. He is jonesing to break his main competitor’s record, Japanese Yuichiro Miura who owns the oldest record at age 80 set in 2013.

Sherchan is quoted as saying:

I have a lot of respect for Yuichiro Miura after he beat my record. But I am still fit and eager to reach the top of the mountain again and get my title back. I am doing a lot of long walks with a weighted bag on my back to stay in shape. I am a very positive person and have always maintained a good diet. My main aim now is to successfully reach the top of Mount Everest again. I want to take back my crown for Nepal and for the Brigade of Gurkhas

And Wales climber, and friend, Jeff Smith is wanting to set a record of his own, at least in Wales, by being the oldest to summit Everest. He has had two hip replacements and arthritis in his knees, but thats not stopping his dream. He was there in 2014 when an avalanche did just that, but Jeff is a determined individual and will be back this season at a young 53!

It is amazing how many people are climbing Everest this year seeking to honor family, causes and perhaps to fulfill a lifetime dream. Best of luck to all.

Keep training hard and get in Everest Shape, which is significantly better than the “best shape of your life”. You will need it at 3:00 am on the Southeast Ridge when the wind gusts to 50 mph and the temperature hovers at -30F.