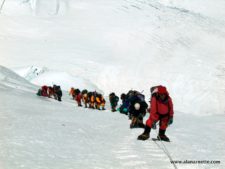 Urgent: Oxygen Failure on North Side

I spoke live by satellite phone with Adrian Ballinger, founder of Alpenglow, at 6:47 am, Everest time. He was at 8500 meters, near the 2nd Step on the Tibet side when he said they had 10 of 39 oxygen bottle regulators fail and had to turn back. During our call, he said everyone was safe and below C3 at 8300 meters.

The guides and Sherpas descended without supplemental oxygen as they gave up their regulators to the members. All are safely descending. Adrian said the regulators spontaneously failed without warning within 3 minutes.

He said all members were below Camp 3 now, but there was a large Chinese team above. He was not sure what oxygen system they use. Furtenbach also used Summit Oxygen and promoted a special mask developed for them to run at 8lpm and just reported all members have summited with no issues so this may be a localized issue.

In my experiences over 16 years, this is an extremely rare event. I know the Summit Oxygen team well and they have the utmost focus on quality as do the other oxygen system suppliers. I will update this post as new information is available.

Update at 9 am Everest time from Adrian:

Due to a mass equipment failure, teams on Everest have stopped their summit push and have descended below 7,700m. All members, guides, and Sherpa are safe and accounted for at this time.

Both of our Alpenglow Expeditions teams, along with other teams on Everest, were utilizing an industry standard supplemental oxygen system during their summit push. When multiple of the team’s oxygen bottle regulators malfunctioned, the team made the difficult decision to stop their summit push and return to lower elevation.

Since this time, it has become apparent that a defective batch of oxygen bottle regulators was released. Multiple teams using the same device have experienced similar oxygen system failures. There are no reported injuries at this time.

Update from the supplier of the Summit Oxygen system Neil Greenwood. I spoke with him five hours after Adrian’s call and he told me:

With regard to the report from Alpenglow Expeditions that they suffered regulator failures on the North Side of Everest at 8500m.  It is very difficult to ascertain the cause of such a failure at this time without being able to inspect the equipment.  The manufacturing and testing process of the regulators has not changed, nor have any of the materials used or our suppliers and all of the regulators supplied to Alpenglow for the 2018 season had been previously used.  The connection and disconnection procedure of the regulator to a cylinder is particular to this application and if the dynamic O ring is broken in the process it can cause problems, however, I suspect this is not the case in this situation.  Based on the information we have from Adrian Ballinger – the failures occurred within 3 mins of each other at 8500m, leads me to suspect that the pressure relief valve (PRV) has functioned.  The PRV is a safety mechanism to protect the low pressure side of the regulator from high pressure.  If this is the case we will need to investigate what caused the developed pressure to increase and thus the PRV to function.  I must at this point again restate my earlier point that at the moment this is guess work and until I see the equipment I won’t know for sure what the cause was but I’m extremely glad to know that all the team members are safe.

In my experience this level of regulator failure is extremely rare. There may be one or two but not 10 like Alpenglow experienced. They were Summit Oxygen regulators not POISX or Top Out but here is where it gets complicated. A guide can use Brand A oxygen bottle, Brand B regulator and Brand C mask so trouble shooting a problem is difficult. Also, it is standard procedure to switch oxygen bottles as they run empty. Alpenglow had at least one swap near Mushroom Rock.
These devices are a bit fragile and if you screw the regulator onto the bottle with the incorrect angle, it can cause the seal to not be solid and leak. Also, if dirt or water gets in the seal it can cause problems. I’m not suggesting “operator error” by the extremely experienced Alpenglow team but more of a comment for others in the future.

Furtenbach Adventures said all of 5 members of their classic team with 5 Sherpas summited safely are now going down.

Alpenglow Expeditions have turned back due to Oxygen systems failure

Ani Lhakpa Sherpa summiting for the 9th time on 16th of May from North Side. (Local Nepali time at 5:40AM). New World Record for women! Breaking her own record.

Adventure Consultants reports summits at 5:43 am 16 May 2018 by Guy Cotter and Leow Kah Shin:

Guy Cotter calls from the summit of Everest: “What an amazing place to be”. In perfect weather, the team is standing on the highest point on earth. Guy reported that it seemed a little harder than what he remembers, but regardless is thrilled to be on top. An enormous thank you from him to the whole support team, both the Sherpa team here in Nepal and all in New Zealand that have got them there.
Congratulations to:
Leow Kah Shin – Singapore, 1st summit
Guy Cotter – New Zealand, 5th summit
Pasang Bhote – Sangkhuwasaba, Nepal, 9th summit
Nima Chiri Sherpa – Phortse, Nepal, 9th summit
Pemba (Prakash) Sherpa – Solu, Nepal, 1st summit

The team that stood on the summit this morning now collectively have 25 summits!
Supporting this team has been Dawa Bhote from Sangkhuwasaba, Nepal. He has been assisting the team at the South Col with radio communications and cooking. The focus for them will now be for a safe descent back to South Col.

Kaitu Everest Expedition team also put 6 members and 8 Sherpas on top between 8-8:30 am.

Jagged Globe was going for the summit but are not giving any updates until they are back to the South Col.

Kenton Cool and Ben Fogel are also headed up but no updates yet.

Over on Dhaulagiri, Carlos Soria is art Camp 1. If he can summit, the 79 year-old will only have SHishapangma left to complete all of the 8000ers. Speaking being 79, Japanese climber Matsumoto Tatsuo became the oldest person to summit Lhotse yesterday.

With conditions being reported as “perfect/calm/clear” look for a big and busy Tuesday night on both sides of Everest. Climbing conditions are being reported as good meaning decent footing on the snow, with a bit less than usual on the north side, but that could just be one person’s perception. All in all the season continues safe with few surprises. It appears that there are summit pushes underway on almost all the 8000ers being attempted this season.

The Horia Colibasanu and Peter Hámor team looking to traverse from the West Ridge to Everest then Lhotse is leaving for their summit push today. Expect them to check in with their progress in a couple of days. They go to Camp 2 first to begin the climb of the West Ridge proper. Also, look for Jon Griffith‘s live stream of Tendi Sherpa’s attempt Everest/Lhotse back to back with no Os around the 21st.

But for right now, we know these teams hare currently climbing and many, many more. I expect to see 100 summits combined in the next 12 hours.

The Adventure Consultants team posted at 9:07 pm Nepal time 15 May:

The call came down to base camp that Guy and Kah Shin, with the expert guidance of Pasang Bhote (Climbing Sidar), Nima Chiri and Prakash Sherpa (Climbing Sherpas), have departed the South Col for their summit attempt. Stars punctuate the sky, winds are light and the team is set.

With oxygen flowing through their high altitude masks and head torches lighting the way the team will climb the steep Triangle Face towards the area know as The Balcony, at 8300m.  As the team sets out into the dark and cold towards the summit of Everest we wish them safe travels and will update with their progress as we hear from them.

Kara Stinson with Alpenglow posted a nice picture of C3 (not sure about the C4 comment, depends on how you cut the camps) on the Tibet side around noon Tuesday 15 May along with: “Just pulled into high camp around 27,000ft! 11 hours til we begin our summit push!“ 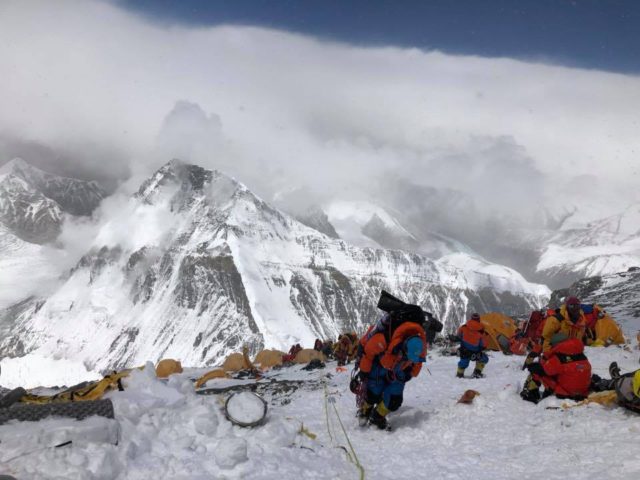 C4 on North side Everest by Kara Stinson

On a sad note, trekker Christopher Lam Koon-wah from Hong Kong died at base camp suffering from high-altitude cerebral oedema according to a report in the South China Morning Post  The headline of “Hong Kong man dies climbing on Mount Everest in Nepal” is inaccurate as he was trekking and not climbing. There have been no deaths on Everest thus far but one on Makalu, Dhaulagiri and probably on Shishapangma. Also there was a death earlier this year on Nanga Parbat.