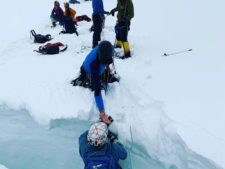 As we enter the last full week of April, acclimatization becomes very serious. There was a bit of snow to start the week, a fall into a crevasse and teams making plans. In other words, a normal Monday on Everest.

The week started very much on schedule with teams on both sides moving to the first high camps. A few had their Puja over the week and others reached 6,400-meters/21,000-feet to sleep.

The Nepal Tourism Ministry updated their permit numbers to 375 on Everest, and 803 on all Nepal peaks. There are 92 Lhotse permits. 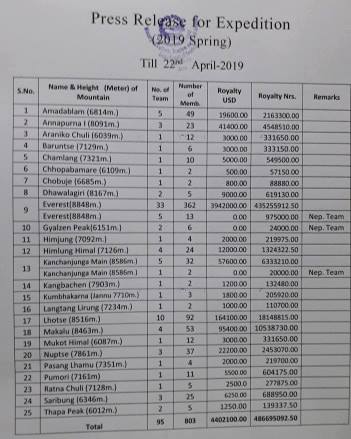 Movement on the North

Everyone is getting settled on the Tibet side and some are moving up. Jason Baldy told me that the rope fixers arrived in a large and impressive caravan. Hopefully they will begin fixing the route above the North Col later this week. He also sent this nice photo that puts base camp into perspective on that side. It is in a very open area with a small snowfield nearby. He said “it doesn’t feel crowded, because it’s not :-)” 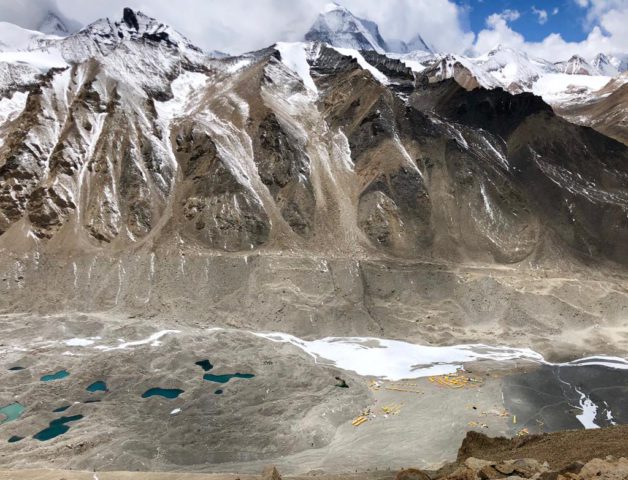 SummitClimb began their move to ABC and reports:

Hi this is David O’Brien from Interim base camp. It took on average 5 1/2 hours for us to walk up from base camp. The weather was good, sunny, fairly calm and a good day to progress up the mountain. Today we had a short walk and plenty of sunbathing.

Most of the Nepal teams have had their Pujas but the ones the Tibet side they are just starting. Thanks to Jamie Ironmonger, who is raising money for Mental Health Charity, he gives us a nice view of what a Puja is like on the North Side of Everest. He commented:

Today we had our very important Puja Ceremony with the local Tibetan Lama. The ceremony gives climbers and Sherpa a rite of passage to climb the sacred mountain that is Everest. Without this blessing, the expedition would not be permitted to go ahead, and it is vital that the Puja ‘is good’. I’m sure you can tell from the video that our Sherpa were happy with our Puja. I’m all in favour with any religion that gives you a shot of alcohol and as much lager as you can handle at 17,000ft!!!

The Western Cwm on the South

Many teams are now in the Western Cwm, including Adventure Consultants. They checked in on their 6 hour climb to a hot Camp 1:

We took 6 hours to reach Camp 1 which is a very reasonable time for the 1st rotation. By 10am the tents were baking and it was impossible to sleep, which is what we wanted most. So now the snow is actually welcome as the temperature has dropped, and it feels a lot more comfortable.

Madison Mountaineering had a scary experience as they were on a trek near Camp 1 when one of their members fell through a snow bridge and about 15 feet into a crevasse near Camp 1. A collective effort pulled him out. While this is not common, professional guides and experienced Sherpas know exactly what to do when it does. This is identical to what happened to me in 2002. There were no fixed ropes at that time but thankfully I was roped to two teammates and was in the middle so I didn’t go to far but it was frightening nonetheless. Garrett reported on today’s incident:

Crevasse Fall between camp 1 and camp 2 today on Everest during our acclimatization hike. Hidden crevasses lurk along the route and snow bridges can collapse. Quick action by our team and others rescued the climber out of the crevasse in good time with no injuries. Big thanks to Ryan Waters & Tashi Sherpa of #mountainprofessionals who were on the scene and pitched in, they are a class act! 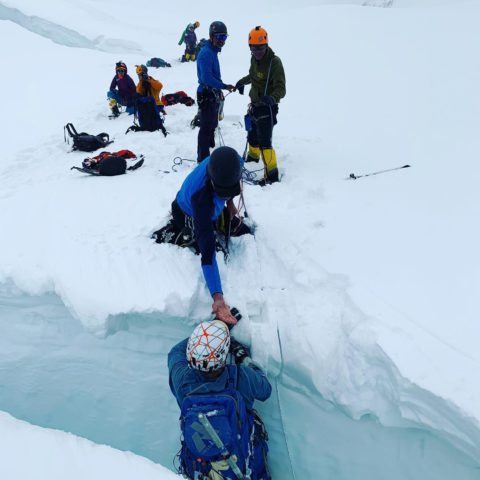 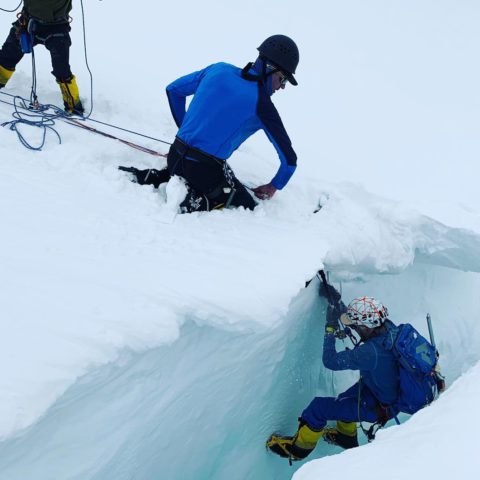 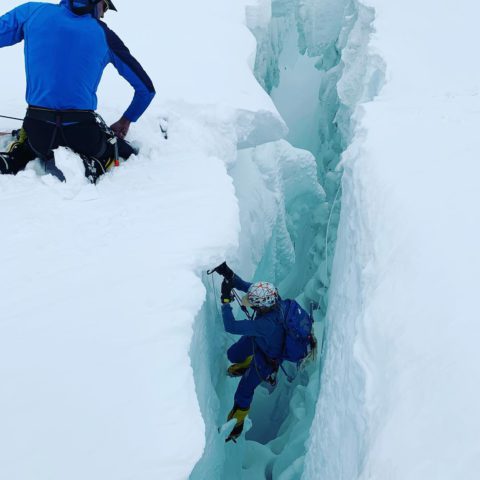 On my first Everest attempt in 2002, I fell into a crevasse just outside of Camp 1 as we were moving to Camp 2. It scared me to death and left me horribly shaken. This was my first experience like this and I was totally unprepared. Thankfully, my teammates Rod and Haraldur came to my rescue that Monday. Here is the story as I wrote it in 2002:

We left BC about 4:00AM on Monday April 22 to avoid the microwave heat of the Western Cwm. Our intent was to continue our acclimatization by spending at least 5 nights at C2 with one night at C3. We also needed to prove ourselves by climbing the steep Lhotse face with loaded packs.

The weather turned very nasty halfway up the icefall. The winds were strong. Temps hovered around 0F and snow started blowing at C1. These conditions made the icefall challenging to say the least. Crossing the ladders, especially the longer ones on a tilt, required strong concentration in the winds. We stopped at C1 for some food and water and then left for C2. Dressed in full Gortex with goggles, Haraldur, Rob and I left C1 roped together. The nylon climbing rope created a single climber with each of us separated by 20′. With Haraldur in the lead, me following and Rob bringing up the rear we climbed a short steep section then began the traverse of the upper Khumbu Glacier. Crevasses are common in this area with several spanned by ladders. As I previously reported, Adventure Consultants seemed to be one of the few expeditions roped up in this section. 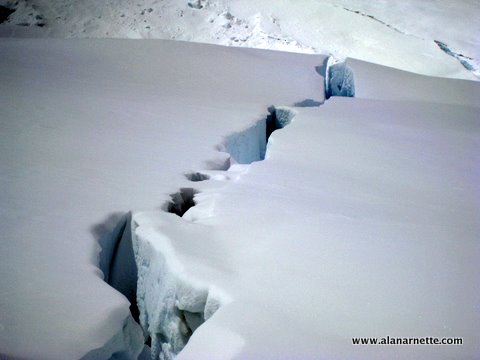 Crevasse in the Cwm 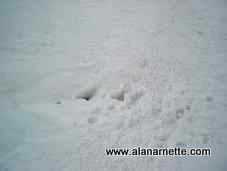 The visibility was very poor with blowing snow as we moved across the glacier. I saw the small black hole in front of me, a tell tale sign of an emerging crevasse. I have crossed many of these at this point. So I followed the track to the right of the hole and prepared to take the extra large step designed to clear the visible – and invisible – obstacle.

In a heartbeat, I fell through the trap door with a whoosh. Everything went dark as snow covered my face. I felt myself hanging in clear air. And it became silent. All in a heartbeat. My first sight was of the nylon rope digging into the ice wall. I intensely stared at it hoping that Haraldur was secured on the other end. It moved deeper into the ice. Solve the problem.

My mind became focused on getting out quickly. I looked down and to my right. There was my trekking pole resting on a snow powder shelf twenty feet below and there was clear blue ice for as far as I could see below the shelf. To my left was a brighter prospect, a similar powder shelf within reach of my left crampon point. About this time, Rob appeared above me anxiously inquiring about any signs of injury. He called out to Haraldur to hold tight. I reached out with my left foot to the powder shelf hoping for a foothold to leverage myself out. The snow puffed away into the crevasse carrying away my hope for an easy exit. I looked again at the rope cutting deeper into the ice wall and thought of my training where you put the handle of an ice axe between the rope and the wall to create a temporary edge. But before I suggested this maneuver, I drove the front points of my crampons into the ice wall. They held. I called to Rob to tell Haraldur to start pulling. Working together, I began to clear the icy trap. With Rob providing extra support, I soon stood beside the crevasse.

The walk to Camp 2 was long. My mind was preoccupied with the crevasse. I had lost all my energy and optimism. Haraldur, Rob, Bill and I made steady but very slow progress. The weather cleared up and now the sun was baking each of us. Off with Gortex, apply extra sunscreen, trade goggles for glacier sunglasses. Arriving at Camp 2, I was spent. I had absolutely nothing left. The final steps were on autopilot – no conscious decisions. I found my tent and sat down heavily on my pack.

I began to feel the emotions starting to escape: frustration, anger, guilt and fear. How did I step on the snowbridge? What if I had not been roped up? What if I had not been properly tied in? What if. The questions went on and on. Whoosh, darkness, hanging, quiet. The sequence repeated continuously in my head. How did this happen? I dwelled on the negative and on the fear. For the first time in the mountains, any mountain, I was afraid. I knew I needed to get a grip on myself but the fear was overwhelming. I saw myself hanging in clear air. I felt my feet reaching out to nothing. I saw the rope cutting deeper. I saw the faces of my family. It was about 3:00PM and I was thirsty and hungry but was not ready to do anything about it. I sat on my pack and thought about the event.

I remembered the story of another climber who had a friend die in a crevasse and he had to perform miracles to save his own life. I considered the danger I was exposed to and how many other people fall into crevasses on mountains. It was part of the deal. I decided to draw on my teammates for strength. I entered the tent at C2 where we ate our meals and told the team that I was shaken, very shaken. Haraldur and Rob talked everyone through exactly what had happened. I received glances throughout the conversation. Soon, someone made a joke. I joined in. It was working.

I slept fitfully that night and spent the next half-day dwelling on what had happened. It wasn’t until I read again a letter that Ashley had given me before I left home that I started feeling better. I felt my confidence increase and the will to continue the climb return. I pondered what I had learned. How could I avoid such a misstep? The experience was turning into lessons. After a rest day at C2, we left at sunrise for a trip up the Lhotse Face. I had one of my best days on the Hill yet.