LATEST HEADLINE May 31: Season Over 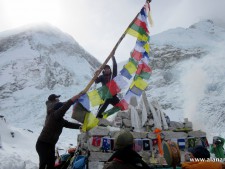 Welcome to the 2019 edition of Alan Arnette’s annual coverage of the Everest climbing season. I try to provide insight and interpretation of the activities ranging from routes to weather to the challenge and reward of climbing Everest.

It’s based on my own three Everest attempts and my 2011 summit plus my climbing experiences of a K2 summit in 2014, Manaslu in 2013 and 30+ more peaks around the world. My reporting uses my own research, sources, and public information.

I do this coverage for one reason only, raising awareness and funds to find a way to slow, stop or prevent Alzheimer’s Disease. If you visit often and appreciate this site, please consider a donation to an Alzheimer’s nonprofit. 100% goes to them, nothing ever to me. Click this link to understand my personal journey with AD that took Ida Arnette in 2009.