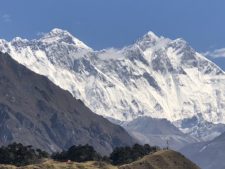 One of the highlights for both climbers and trekkers, even if this is your first or twenty-first visit to Namche is the hike to the Everest View Hotel and the unparalleled views of the Himalaya. Everest, Lhotse, Nuptse, Ama Dablam, and many other high peaks serve as the reward for the strenuous hike.

The hotel first envisioned in the 1960s by Japanese Takashi Miyahara, it opened in 1971. Designed by Japanese architect, Yoshinobu Kumagaya, often Japanese tourists took helicopters directly from Kathmandu to the hotel. There was only one problem, sitting at 12,725-feet, many guests got altitude sickness, so supplemental oxygen was made available in each room. Today, it still attracts guests but is one of the most expensive hotels in the entire Khumbu.

Namche was not what She expected. Friends showed her pictures from a decade earlier of narrow dirt streets, simple stone buildings in the natural amphitheater that defined the village terrain. She found that but also, a disco, the Irish bar with endless loud music escaping between the stone walls. The multiple high-end coffee shops, complete with leather seating, power available for recharging phones and of course, WiFi – sometimes free other times for a small fee. Going into a climbing gear store, it was competitive with any shop She had back home. You could buy quality sleeping bags, jackets, technical climbing gear, anything you needed at good prices.

They walked by a small store with two empty barber chairs. As She walked the streets with Dutch and the Couple, they were surprised to see a stone-lined waterway that drained rain and snowmelt away from the city into a fountain area that was seemingly modeled after the Trevi Fountain. The helipad was busy with flights from Kathmandu bypassing Lukla.

But just when She was ready to decry the commercialization and western influence, a yak-train came meandering through the streets outside the Everest Bakery. Their bells clanging as they moved slowly, ignoring anything other than the yak in front. A lady managed them, to the extent a yak can be managed, with whistles, loud one-word shouts, and the occasional rock thrown the accuracy of a World-Series pitcher.

Climbing stone steps, they left the small village center proper. A cacophony of sounds erupted behind them as they fought for oxygen on the steps. All of a sudden four school kids, all under ten, came running by them laughing and poking one another on their way to school at the top of the hill overlooking Namche. She smiled and thought of her own children.

“Let’s grab a jacket and water and head up to the Everest View Hotel. It’s a short but steep walk. It’ll be good for our acclimatization, and we will be rewarded with some of the best views of Everest in Nepal.” Guide announced at breakfast. Back in her room, She put on her lightweight down jacket, thin liner gloves, and hiking boots. Reaching for her trekking poles, She thought of all the advice She received before leaving. So far, She was spot on with gear.

The group left the Panorama Lodge perched about the main village but below the school. She was impressed with the lodge. Each room had its own bathroom and shower, rare in Namche. But She was surprised when a local representative appeared asking each member to pay $20 per night for the “tourist fee.” Namche it seemed had embraced local taxes, fees and was no longer a cheap place for tourists, but the $10 room was still there if you looked hard. 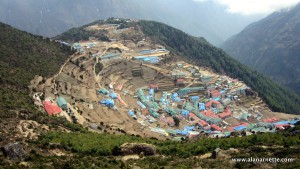 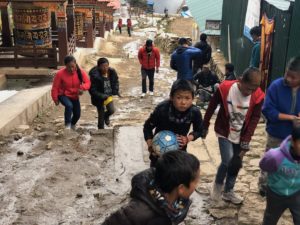 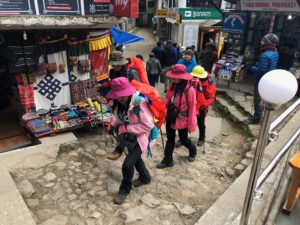 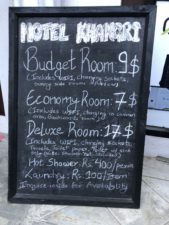 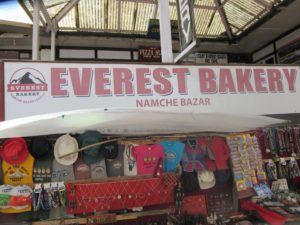 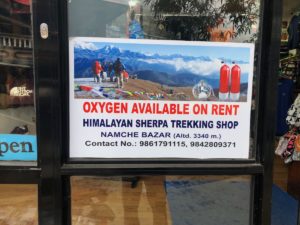 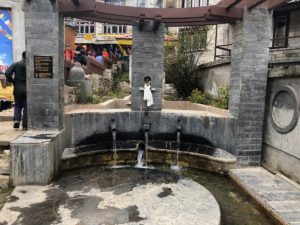 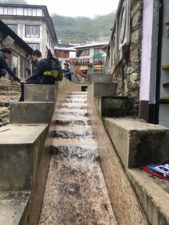 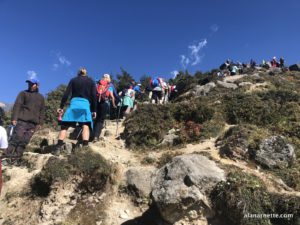 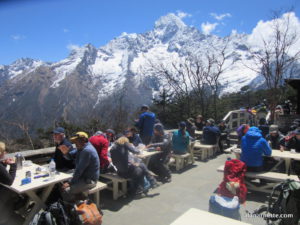 They reached the top of the dirt path and began to walk on an even steeper trail that took them high above Namche. The views revealed themselves like a Broadway Play, each step was another reward and they knew the best was yet to come. The trail leveled onto an open area covered in thin brown grass, spring had not quite arrived. A few yaks grazed on the flat section. She heard the kids playing at the school. The Nepali military base next to the school hosted an occasion military helicopter that landed creating quite the buzz.

They approached a large building. “Are we here?” Dutch asked. “Not yet, a bit further uphill, But get ready for a treat around the corner,” Dawa advised the group. As they made the left-hand turn around the building, there She was: Sagarmatha, Chomolungma, Zhumulangma, Mount Everest.

She stopped. They all stopped, quietly letting their eyes trace the Khumbu Triple Crown: Everest, Lhotse, and Nuptse. Two of the fourteen highest mountains on the planet. The signature white plume flowed off the summit of Everest like a bride’s long wedding gown train. Mother Goddess of the Earth never looked more lovely. Loner spoke, “I have been dreaming of this since the sixth grade.”

She went deep inside herself. This is her dream. To summit Everest would be meaningful in so many ways. To show her children that they can do anything they set their mind to accomplish. To validate the confidence her husband showed throughout the journey. To honor her mother.

However, above all these, stood the one that was unique and personal to her. She set this goal years ago, and it was important to her above what it meant to anyone else. She knew from her other climbs that if She was not clear on her reason, it would be too easy to turn back when She hit the wall. Now being as close to Everest as She had ever been in her life, her resolve grew in power. Her purpose transparent. She was ready.

If She didn’t summit, it would not be from a lack of tenacity. “This is my time.” She said out loud. No one heard her, everyone lost in their private world.

Dawa standing nearby observed his charges. He smiled inside. He enjoyed seeing the moment foreigners understood the magnitude of their mission. He too was ready.