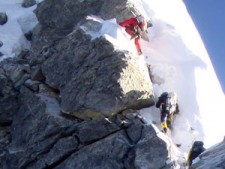 At the end of each Everest season, operators and officials review the results. They look mostly at the number of summits, deaths, and the issue of congestion at the bottlenecks. There were over 600 summits this year and Everest took nine lives in 2013, ten in 2012.

For 2013, this process has begun with gusto as recent articles discussed doubling the permit fees as a way to address crowds and installing a ladder on the Hillary Step to address congestion. I think both proposals are bad ideas.

By the way, Nepali Min Bahadur Sherchan, 81, has abandoned his summit climb and is already back in Kathmandu. He held the male age record at 76 but lost it to Japanese Yuichiro Miura who summited last week at the age of 80. Sherchan had trouble getting funds for his expedition and left EBC days after almost every other teams had completed their expeditions due funding and sponsorship from the Nepal government arriving late. Mountain conditions had already begun to deteriorate.

Ladder on the Hillary Step

The Hillary Step at 28,750 feet is a short section of moderate rock climbing. It is the last obstacle before reaching the summit. The Step itself is about 40 feet high at an angle of 45 to 60 degrees. For all climbing Sherpas and most climbers, it is a simple obstacle easily climbed using the ropes installed.

In 2013, a second route was installed bypassing the Step entirely for climbers descending from the summit. From what I can tell it was not used by many people as it was hard to find on the descent and required a steeper rappel down than the normal route. Also, in 2013, the congestion was not so severe that people felt compelled to find an alternative. Waits of 15 to 30 minutes were reported by some climbers but most people never mentioned waiting at all.

On the ascent, most people will use their jumar to pull their way up the rope, others will more elegantly use footwork to climb slowly using the rope only for protection from a fall.

On the decent, the vast majority of climbers with use an “arm-wrap’ technique where they wrap the rope around one arm to provide support as they slowly drop down the rocks. Some back down, other will go face first. Occasionally a person will use a belay device for maximum protection but taking significantly more time.

The actually movement is not difficult. What makes it difficult is fatigue, the altitude and having your vision obscured by goggles and wearing an oxygen mask.

The suggestion is to put a ladder on the Hillary Step to only aid climbers descending, but it is entirely unclear how that would ever be managed.

If a climber is going too slow or having extreme difficulty on the Step, then they may be in danger of a tragic event on the descent from the summit and should turn around to save their own life or avoid a rescue that would put others at risk.

I believe having the ladder would undermine the overall difficulty of Everest and encourage those who lack the fundamental skills to take the risk supported by greedy operators. There are better ways of potentially making Everest safer without making it easier.

There is a ladder on the North side at the Second Step at 28,248 feet installed by the Chinese in 1975. That section, about 120 feet high with near vertical sections, is completely different from the Hillary Step. It is significantly more difficult and requires expert skills to climb. Without the ladder, almost no summits would occur on that side.

Before the ladder, a Chinese climber in 1960 climbed the Step in his bare feet. As the story goes he took off his boots to stand on the shoulders of a teammate to gain access to climbable rock.

Conrad Anker, a world-class alpinist, free climbed the Second Step in 2007 after removing the ladders. This was in an attempt to recreate the Mallory and Irvine experience of 1924. Anker rated the Second Step at a 5.10 grade. The Hillary Step is often classified as class 4. But again, it is altitude that makes Everest hard in the first place.

The second proposal begin floated is to double the permit fees on the South. The concept is to reduce the number of people using affordability. Again, I think this is a poor idea.

For most people who climb Everest, money is not their top concern; it usually is time away from work. If they have the ability to pay $40,000 to even $75,000, another $10,000 will not stop most people but further encourage ‘people with means’ to climb Everest for bragging rights further distancing Everest from any kind of spirit of mountaineering.

Most likely the increase will have two consequences. The first would be to shift climbers to the Chinese side which is already less expensive due to permit fees charged by the CTMA. The second would be to encourage more short cuts by budget operators to keep member prices as low as possible.

In 2013, I was told by one reputable guide that a local Nepalese guide service charged members USD$18,000. One way to do this was that they allegedly paid their Sherpas USD$700 for the entire season, a wage much lower than what is mandated by the Ministry of Tourism. Most Sherpas are paid thousands of dollars depending on their role.

First, what is the problem on Everest that attracts attention? Usually it is the reports of deaths. Then there are reports of long lines. Clearly both are problems but safety is at the root of the arguments.

I believe the basis of these issues lie with inexperienced climbers that are enable by poor operators and guides. The inexperience shows up in slow climbing, ignoring health issues and taking unnecessary risks to achieve the summit.

There are too many operators who will take on a member regardless of their experience in order to boost their s. They will tell the member about extra Sherpa support, the number of times their Sherpas have summited and sell them a low price expedition that is filled with shortcuts.

The member, eager for their chance, will hear what they want to hear, ignoring all the warning signs; even the history of rescues, shoddy logistics, broken gear and perhaps deaths attributed to that operator. An official clearing house of incidents would be useful to identity the suspect operators.

The long lines are more complicated. The trend on Everest is to increase the Sherpa support as way to encourage climbers who may think they are not ready. The members should listen to themselves more closely.

The long lines are usually due to one or two slow climbers. It is often difficult to pass another climber on Everest, especially if they are already tired or a Sherpa is carry a huge double load.

The obvious solution is tighter vetting of members as to their skills, capabilities and experience. This could be done through the Nepal and Tibet permitting process, but corruption is an ongoing problem as is simply falsifying an application.

I don’t think leaving vetting solely to the operators will work as some will ignore the risks to get the business. Of note, many reputable operators regularly turn away members only to see them on the mountain with someone else.

Another option is to limit the number of permits issued each year. On Denali, there is a limit of 1500 permits each season, which has never been reached. But again, corruption is a real problem and an Everest permit would have real value.

For Everest both of these options would require cooperation on both sides to achieve the goal of increasing saftey and prevent switching to the side with the looser permit process.

However, I am not sure if it would reduce deaths given that most of the recent deaths have been caused by altitude related issues, that are not easily screened out before a climb, or from mistakes made during the climb such as not clipping into the safety lines.

If safety is the top concern, then requiring a climb of Nepal’s Manaslu (26,759’/8,156m) or Tibet’s Cho Oyu (26,906’/8,201m) would be good step. This would increase the chances that an Everest climber would have experience to select an appropriate guide service. Also they would have an increased understanding of how their body reacts to extreme altitude. It would also give them a solid basis of skills and experience to handle potentially similar conditions that they would face on Everest.

To encourage climbers to make this investment, perhaps a discount on the Everest permit price would work while maintaining the same level of permit revenue by having applicants climb two mountains. It would most likely increase the overall money brought to the country through porters, teahouses and other support functions. Finally it would reduce the number of people who climb Everest for bragging rights thus attracting more qualified climbers.

Many operators ask (not require) for climbs on other peaks such as on Denali or Aconcagua to demonstrate skills. So could these climbs accomplish the same objectives? I don’t think so. Those mountains, while difficult in their own right, are not 8000m mountains or have the complexity of a two month expedition.

Can Everest be made safer? I don’t know, the same way I don’t know if Mont Blanc, Denali, Aconcagua or any mountain in Colorado or France can be made safer. This season, there have been multiple deaths on 8000m mountains other than Everest. In the end it sometimes comes down to luck and not being in the wrong place at the wrong time.

But not being put in that position often is the personal responsibility of the individual climber.

You cannot make a mountain safer but you make climbers better.