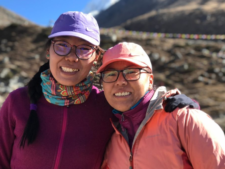 Everest has become what I call a formula climb these days with almost all the expeditions following the same route, same acclimatization formula and using the same ropes.

However there are always a few climbers each season that seek to break this mold and do something unique. 2019 is no different. This season we have few interesting characters that I’ll be following closely and reporting on. I’ve already made contact with some of them.

While there are about 17 named routes on Everest, it’s rare for a new route to be attempted much less completed. The last time a new route was successfully completed was the Korean line on the left side of the Southwest Face (Southwest Face to West Ridge) in 2009, 10 years ago. And the following year Gerlinde Kaltenbrunner was the first to climb the North Col from the West and continue all the way to the summit.

As I covered in this interview with Cory Richards he and Ecuadorean climber Esteban “Topo” Mena, will join forces to attempt a natural line on the North Face that has been attempted but never competed. It basically goes straight up from Advanced Base Camp. They will be using the professional logistics from Adrian Ballinger’s Alpenglow commercial outfit. Recall that Adrian and Cory have been together on Everest for both of their no O’s summits in 2016 and 2017. 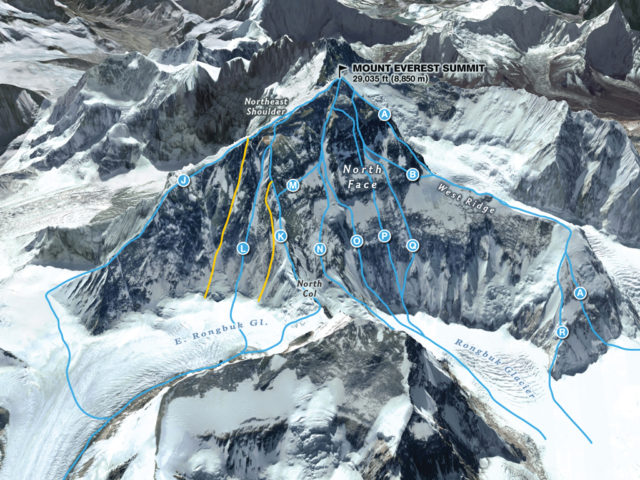 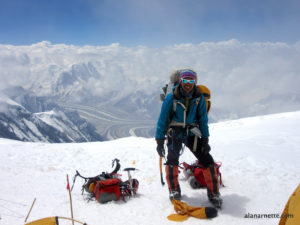 Kami Rita Sherpa on K2 in2014 by Alan Arnette

Kami Rita Sherpa, 49 from Thame, now owns the record for most Everest summits when he topped out last year for the 22nd time. He has said he want to get to 25.

I know Kami Rita well as were were on K2 together in 2014 and summited within minutes of each other. This is a different Kami (Kami Tshering (Ang Chhiring) Sherpa – Pangboche)  than I summited Everest with but he was also on K2 with us.

Anyway, Kami Rita is well known throughout the climbing community as one of the strongest, steadiest and nicest persons you would ever meet. In addition to his 22 summits of Everest, he has 8 Cho Oyu summits, 1 Lhotse, 1 Manaslu and 1 K2 for a total of 33 summits of 8000 meter peaks. The previous record holders have all retired: Apa Sherpa from Thame and Phurba Tashi from Khumjung each with 21 summits.

In the overachiever department, Nirmal Purja is not content to climb Everest, he wants them all … and all at once! An impressive man who has saved lives on Everest, his Project Possible has a schedule for him to summit all 14 of the 8,000-meter peaks in seven months, breaking the previous record set in 2013, Korean climber Kim Chang-ho set the current record for all 14 in 7 years, 10 months, 6 days. The previous record was set in 1987 by Polish alpinist Jerzy Kukuczka climbing all 14 in 7 years, 11 months, 14 days.

Nims has broken the project into three phases:

Nims is a former Gurkha and claims to be the first Gurkha to climb Everest while serving the British Military. He confirmed to me today that the project is on but he needs sponsors so I’ll monitor the status.

The journey of fund raising has been so hard for me, it’s not my expertise. I am humble and sometimes shy away too much from the credit maybe. I was approaching people and they would say Nims “why not next year? if we do it next year we will have more time to raise funds”. My answer has always been the same, by saying i will wait we are choosing the easier path.

I see so many times that path has been chosen and then things happen, and the dream is never actually lived out. Many times situations change. I will always push as hard as I can to achieve the mission. I have always done this. 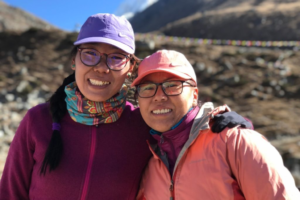 Nima Doma Sherpa, 36,  and Furdiki Sherpa, 42,  are on Everest this year seeking to finish the climb to the summit their husbands never did. Furdiki’s husband died while fixing ropes in 2013 and Nima Doma ‘s husband died in an avalanche near the base camp in 2014.

Furdiki told the press, “The death of my husband is not the end of my life. I am undertaking the expedition to spread the message that widows can accomplish even such hard adventures.” And they both added “We are going to climb the mountain to close our pain and to honour our husbands by reaching the peak they could not.”

The world’s fourth highest peak sits next to Everest and is often in her shadow literally and figuratively. It has become fashionable for Everest climbers to try and summit Lhotse on their way down to get both summits. While totally a matter of opinion, it seem better to at least return to EBC then climb Lhotse instead of hanging a left on the way down from the South Col.

In any event, South Korean Hong Sung Taek is back for his fifth attempt to climb Lhotse’s South Face, which is on the other side from the Western Cwm. There are 11 people on his team including 5 South Koreans, 3 Chinese, 1 French, 1 Kosovo, and 1 Spanish. They will attempt a direct new route they characterize as a modification of the Kukuczka route.

Of course, Jerzy Kukuczka was the world-renowned Polish climber who became only the second person to summit all 14 of the 8000ers without supplemental Os. He also established a new route on K2 in alpine style, the so-called “Polish Line”, which no one has repeated. Kyukuczka died while attempting a new line of Lhotse’s South Face in 1989.

Hong is known for reaching all the Three Poles and crossing the Bering Strait and Greenland for the first time. He summitted Everest in 1995, skied to the South Pole in 1994 and walked to the North Pole in 2005. He also crossed Bering Strait by foot in 2012. He has a long history with Lhotse with five previous attempts: 1999, 2008, 2013, 2015 and in 2017 when he got to within 300 meters of the summit. Almost all of his attempts have been stopped by weather, on dangerous snow conditions on the route. 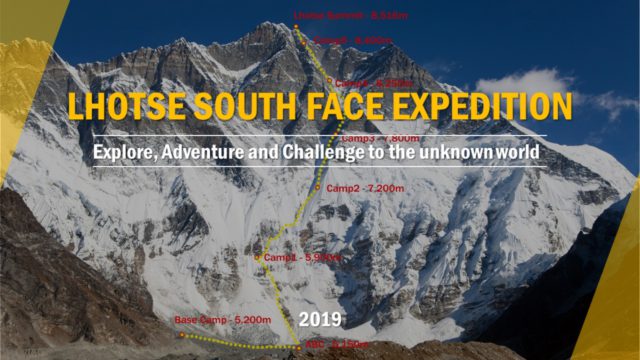