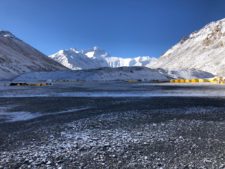 Its pretty much business as usual on both sides of Everest. There were a few moderate sized earthquakes in Tibet and Nepal but they had no impact on Everest. Quakes are a part of daily life around there.

Sad news after a record 32 summits on Annapurna that Malaysian climber Wui Kin Chin is missing after summiting. An air search is schedule but has not yet happened due to bureaucratic delays.

Progress on the summit rope fixing on both sides. On the Nepal side, the Sherpa team has reached C3 on the Lhotse Face according to Garrett Madison of Madison Mountaineering. On the Tibet side, the fixing team arrived and are hoping to get to North Col in a few days.

On Wednesday, after a small collapse in the Icefall the Icefall Docs asked for a climbing pause to fix the route, a normal occurrence.

Lots of frustration with EverestLink this year as the speeds are very slow. Many people feel the price is way too high, especially for the performance. Obviously, they have few options but NCELL has 4G cell service in spots around EBC, and then there are the satellite systems from Thuraya and Iridium, albeit quite expense unless shared by many users.

On Lhotse – South Face, South Korean Sung Taek Hong reported they slept at Camp 1 at 5,900-meters and are preparing for their second rotation this time to Camp 2. They also note that the Face has a lot of snow. Avalanches have stopped them in the past.

Teams are spread from base camp to Camp 2 doing their acclimatization. Updates are limited as most people don’t have good connectivity above EBC, and sometimes not even there!

Kirstie Ennis has a good blog post today as she describes the struggle to stay focused while acclimatizing at base camp. Worth reading her entire post :

Jesus. It’s cold. First time I’ve had a real chill the entire trip. I woke up to my hair being caught in my sleeping bag velcro and white frost covering me. I sleep with my forehead and eyes out of the bag and no sooner than I opened my eyes, I wanted to close them as the cold air seemed to trace my veins. I fought everything in my bag (prosthetic leg, puffy pants, batteries, IPad, water bottles, and so on) to muster up the strength to get out of my tent and into breakfast.

My days slowly seem to melt together; it feels like we are going through the motions just to make the days pass. It feels good to be out here and disconnected from the real world though. While I still stress about work and home life, its nice to be able to focus on me and staying present.

Beautiful picture of Everest, once again from Jason Baldy 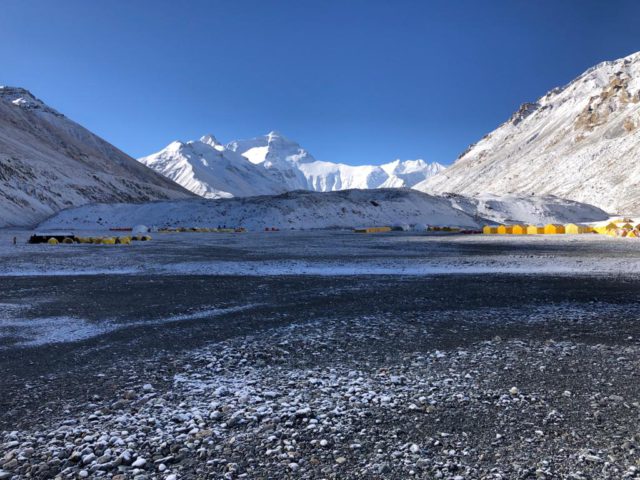 Yesterday our team reached the camp of 5800 M. This is the so-called “Intermediate” Camp. Everyone felt good. But because of the earthquake in Tibet, this morning we decided to go down to the BL. Nothing happened, but it was on the same date 3 years ago that the earthquake in Nepal was taken, as a result of which our expedition was closed. This year while everything is going great. Snow is failing every day, as usual in April.

A nice update from Adventure Peak‘s member Kristy on their journey through Interim camp to ABC:

The walk to interim felt long and we all felt the altitude. The route was straight forward but we all finally felt like we are on this magnificent mountain.  We arrived at camp in what can only be described as bleak, cold and miserable weather. But as always the Sherpa team had made it as comfortable as possible.

We set off for advanced base camp 6500 metres approximately. It felt like a very long walk which got harder and harder with each step and the lack of oxygen. Nick was thinking what am I doing here. Paula was thinking when will I eat next and I wasn’t thinking. We arrived almost together at camp which never looked so good. With less than half of the available oxygen to breathe we were breathing heavily.

After our first night in our new home and a few headaches and restless sleep we are resting today. We can see the route up to the North Col but right now it’s a struggle to walk to the wee tent. Hmm!!

Some days on Everest are more exciting than other. And then there are days like today. That said, if you are there and became sick, or saw the Western Cwm or the North Face for the first time, it was a big day.

One Response to “Everest 2019: Missing Annapurna Climber and Quiet on Everest”